"Zoo"[1] is the eleventh episode in Season 1 of Clarence.

Clarence and Belson get paired up on a field trip to the Zoo.

The episode begins with the school bus arriving at the zoo. All the kids step out of the bus. Belson complains about the trip, then Clarence runs over to him saying he forgot his juice box. Belson thinks Clarence should go look for his "loser friends", Jeff and Sumo, but they're both sick and couldn't come.

Ms. Baker assigns an activity for the class, they have to figure out which animal stole the zoo key. Clarence and Belson were sitting next to each other on the bus, so they have to be seat buddies for the whole day, but Belson doesn't want to be stuck with Clarence during the whole trip.

Ms. Baker points out that since one of them, (Breehn) is allergic to peanuts, they have to stay away from certain areas of the zoo, and all the children get disappointed. The children wait in a long line to see the turtles, but it takes so long that Belson leaves and says he'll solve the mystery later. Clarence follows him. As both of them are walking, Clarence is amazed by all the animals, even by pigeons and squirrels. Belson is not amused and says they can see those animals anywhere. Clarence thinks all the animals are so great and notices that a lot of the animals don't have questions on his paper, so he makes up his own questions about them. Belson starts walking fast trying to get away from Clarence, but Clarence chases after him.

Later, the two arrive at ​​the dolphin tank, but there are no dolphins to be seen. Belson reads a sign saying the tank's temporarily closed, which makes him angry and starts banging on the glass.

The Zookeeper shows up and tells him not to bang on the glass. Clarence decides to take Belson to see the cheetahs next, but Belson isn't interested. Meanwhile, the other children are at lunch, Percy tells Ms. Baker that he gave his peanut butter sandwich to Breehn, not knowing that peanut butter is made from peanuts. Breehn gobbles up the sandwich really fast and Ms. Baker tries to get him to spit it out, which the other children find amusing. On another part of the zoo, Clarence tries to entertain Belson by showing him different animals and even getting someone to paint a picture of the two of them together, but nothing made Belson happy.

The ambulance truck arrives because of Breehn's allergic reaction to the peanuts. Ms. Baker tells all the children to get on the bus, and Nathan punches Percy and Breehn for ruining the trip. Belson and Clarence are still at the zoo and are looking at the bats. Clarence learns about bats using echolocation, and tries doing it himself, but ends up knocking things over. Belson gets really angry and calls Clarence annoying.

Clarence decides to do everything Belson's way and starts mocking him and saying that he hates everything. Belson says that isn't him and walks outside.

Clarence and Belson realize that it's nighttime and the zoo's closed. Belson is upset, but Clarence is happy because they get to say goodnight to the animals. Belson doesn't understand how Clarence can turn the biggest problems into something good, and Clarence doesn't understand how Belson doesn't like anything. Belson reveals that he likes dolphins, but they weren't even there. Clarence says that if the tank's closed, the dolphins must be somewhere else. He looks at the map and the only place they haven't been to yet is the "animal church", so they start making their way there and sneaking past the Zookeeper at the same time.

When they arrive at their destination, they finally get to see the dolphins, and Belson is amazed, but soon, the Zookeeper catches them.

Ms. Baker arrives and tells the police it'll never happen again. Then she scolds Clarence and Belson for leaving the group and tells them that she was really close to moving to California, which causes her to start daydreaming. Belson tries to get her attention and tells her that the zebra stole the key and Clarence figured it out. Clarence tries to give Belson a zoo power bear hug but fails and the episode ends. 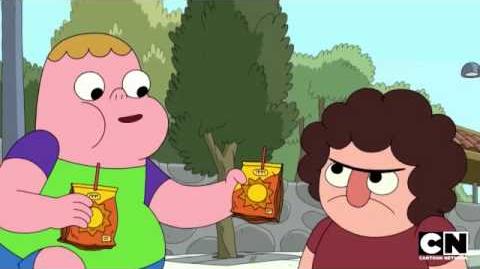 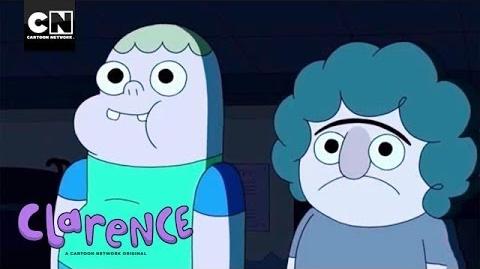