Where the Wild Chads are

Where the Wild Chads are is the 45th episode in Season 1 of Clarence.[1]

Chad and Clarence are in a car with Chad driving, going to a camping trip. Clarence tugs on his Chad's shirt telling him to tell a story again. Chad states that he said a lot of times. Clarence begs, and Chad does. We never get to hear the story though.

Later on, Chad stops at this place, to get a map for a camping trip. There is an old man sitting in a chair who looks like he is asleep. Clarence is watching through the window hoping for a fight, mimicking everything that they're doing even dubbing their voices. Eventually, the old man gives him the map, which doesn't please Clarence since there was no fight.

According to the map they were supposed to camp out Spot #8, but a man was outside, who had a tent up and everything. Chad rolled down his window and told the man that this was there spot. He the man turned around and he had freckles, orange hair, and his cheeks were.... uh, flabby. He gives them a creepy smile, and calls for his son, Camden, who looks like his father except shorter. His father tells him that the folks need firewood, so Camden goes to get some. Chad says, "no we don't," while rolling up the window in disgust. The man walks closer to the car getting he cheeks smashed on the car. Chad drives away and from the review mirror we se Camden running after them yelling that they forgot the firewood, then trips and falls.

Clarence and Chad drive to another camping spot, which is vacant. Clarence expects to have to find stuff in the wild to live, but Chad already stocked up on sodas, matches, and a tent. while Clarence was rubbing sticks, together, and throwing leaves in a pile to sleep on. Clarence is sitting down pouting, while chad is just finishing up putting up a hammock. Chad lays down and tells Clarence to go get marshmallows to roast, then he goes to lay on the hammock. Clarence is excited, so he runs in eager to get the marshmallows, he returns, but Chad is asleep. This angers him and takes of his clothes and Chad's, removes batteries of a speaker along with the speaker, beans, money, and Chad's wallet in a lake.

After a few moments, Clarence screams for Chad. The scene then changes to Camden and Hershey hearing the scream, and go looking for the person who is sleeping. Chad wakes up startled, and asks what's wrong. Clarence sobs saying that a bear came and took everything. Chad believes and gets a flashlight, and starts looking for the bear much to Clarence's excitement. Chad asks which direction the bears went, and Clarence says that the bears said that they went this one, pointing to a direction. Chad asks that they talked, and Clarence says yes, and Chad believes him. It starts to get real cold and late, so Chad squeezes into a small log. Clarence starts to get worried about all the stuff that he threw in the lake that he starts looking for it. Clarence eventually finds the beans, and goes after it. The water pushes Clarence and the beans to a dam built by three beavers, which stops Clarence and the beans from going any further. Clarence gathers the beans, and starts to swim back, but his leg gets caught in one of the branches. Clarence screams for Chad.

Chad is in the log dozing. He hears Clarence's scream and wakes up. He tries to break out of the log, but he couldn't. He grunts in frustration and then tries to pick up the flashlight, but he drops it. Clarence screams again and Chad runs to the place of where Clarence is. Chad eventually breaks the log with karate moves. He notices and half-chewed tree that was chewed by the beavers. He uses all of his strength to push it down and he does. The fallen tree creates a bridge to get to Clarence. He grabs Clarence's arm, and he gets pulled out along with the beans.

Later Chad and Clarence are in the car driving home after a long, rough day. Clarence is munching on marshmallows, despite the fact that the marshmallow bag is filled with water.

Camden and Hershey are still looking for the source of the scream. Camden finds Chad's wallet, and finds his driver license wondering if it is evidence. His father then notices the money much to his excitement, and shoves it in his pockets. Camden gets worried wondering why he didn't turn it to the park patrols. The dad turns his head back and yells at him saying that not everything they find has to get sent to the park patrols.

The episode received mixed or negative reviews, but mostly followed after the release, some speculated that the way, Clarence was acting since it's prior episode, "Lil' Buddy", was uncalled for, which a few had negatively criticized on Clarence and his behavior, by the way he acted out over Chad's lack of action and for disposing the important items on river, as many find it uncalled for, as some fans personally resented the episode. 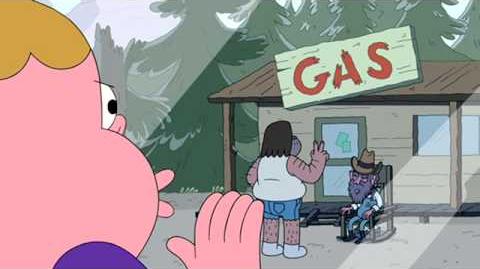 Clarence - Where the Wild Chads Are (Sneak Peek)

Retrieved from "https://clarence.fandom.com/wiki/Where_the_Wild_Chads_are?oldid=90617"
Community content is available under CC-BY-SA unless otherwise noted.