Water Park is the 44th episode in Season 1 of Clarence.[1]

The trio heads to Squirty’s Moist Mountain water park, and as Clarence learns the truth about his idol Squirty, Jeff and Sumo wait in line for the reopening of the parks tallest slide, The Curd Churner.[2]

The episode starts with a commercial about the fun at Squirty's Moist Mountain Waterpark, announcing the reopening of the park's tallest waterslide, the "Curd Churner". Meanwhile, the trio are waiting in line for Squirty's. When they get to the front the lady asks Clarence if he wants a cap and accepts. But Jeff and Sumo decline. Jeff tries to convince his friends to start out with the other rides, explaining that it is his first time at a water park, though Clarence and Sumo think they are all boring. Sumo says they should get to the Curd Churner, the tallest ride in the park.

When they see it they are so surprised how big it is. So they start waiting in line. But Clarence wonders off to see Squirty. Then runs away and Clarence chases him to a room where he finds the Squirty costume and Joshua, who then chases him. Meanwhile, Sumo gets some food while Jeff is freaked about the Curd Churner. While in line he find someone falls through the wood surly thinking the structure would break.

As Joshua chases Clarence, Jeff and Sumo were at the top. Jeff is reluctant to go onto the raft, but Clarence comes up and pushes him and Sumo on. Joshua jumps on the ride as Jeff got over his fear of the ride. Then Sumo barfed on Joshua who about to get Clarence. As they see the pictures, Clarence spots the Squirty's costume and comes over, comforting him about the hospital before he is hauled off with Joshua. Jeff wants to go on the slide again. Sumo get the picture and loved how it turn out. Jeff and Sumo run over to wait in line, and the structure suddenly snaps as the episode ends. 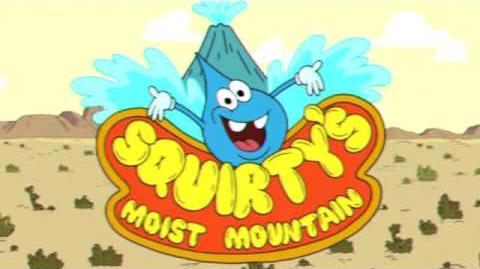 Retrieved from "https://clarence.fandom.com/wiki/Water_Park?oldid=91623"
Community content is available under CC-BY-SA unless otherwise noted.