Turtle Hats[1] is the 31st episode in Season 1 of Clarence.

When Ms. Baker accidentally assigns a weekend project on "turtle hats" the students have a hard time understanding what is being asked.

The episode begins in Ms. Baker's class. The children watch the clock, and Ms. Baker texts to a guy named Trey on her cellphone.

Ms. Baker gets up and announces to the class that she's going to give them a different assignment for the weekend, but at that very moment, Trey sends a text that says, "I THINK U R TURTLE HATS". Confused by the message, Ms. Baker says "Turtle hats" aloud making the children think their assignment is on "Turtle hats", they all write it down on their papers, then they rush out of the classroom as soon as the bell rings.

In the treehouse, Clarence and Sumo goofs off a bit, until Jeff tells them they better get started with the assignment, Sumo doesn't want to, so he quickly draws a turtle wearing a hat and sticks the paper to his forehead. Clarence decides to ask a couple of his friends outside the treehouse what "Turtle hats" mean, but they had no clue either. Sumo tries to get Clarence to realize that the paper on his forehead is what Turtle hats is, but Clarence thinks it's a joke, so he puts a leaf on his face, then the two start dancing around and saying "Hello" to each other. Jeff gets tired of Sumo and Clarence goofing off, so he decides to leave the treehouse and work on the "Turtle hats" assignment all by himself.

At Chuckleton's, Ms. Baker shows Ms. Shoop Trey's text about turtle hats to see if she understands it. Ms. Shoop tells her that people use codes in text messaging, and that she has to figure out what they mean.

In the treehouse, Sumo shows Clarence a movie he got from his cousin, "President Ralph". Clarence gets excited and wants to watch it right away, but first, they have to find Jeff. Clarence spots Jeff sitting on a log, and the two walks up to him and accidentally knocks him down too. Sumo and Clarence tries to get Jeff to come watch the movie with them, but they don't say it, instead, they pretend that they want to work on the project too by watching an education film about turtles. At Clarence's house, the boys watch "President Ralph" just like they wanted. Jeff is confused because the movie has nothing to do with turtles. Later, Jeff decides to leave during the movie to work on the turtle hats project, and Clarence tries to get him to stay, which doesn't work. Sumo puts that picture of a turtle wearing a hat on his forehead again thinking he's already got the project figured out, but Clarence begins to wonder what they're going to do about the project for real, which angers Sumo, so he leaves the house.

In Ms. Baker's apartment, Ms. Baker searches the internet to find out what "Turtle hats" means, but she gets frustrated when there was no results to what she searched. In Clarence's room, Clarence sits on his bed, then Mary passes by and sees how sad he looks, she's asks him what's wrong, and Clarence tells her about what happened earlier with Jeff, Sumo and the project, then Mary tells him he'll just have to figure it out.

In Ms. Baker's apartment, Ms. Baker tries to send a text message to Trey, but still not knowing what turtle hats means, she has a hard time figuring out what to say in the text, and ends up getting frustrated and throwing the phone. The scene cuts to a short montage where Jeff, Clarence, and Sumo are trying to do their project, and the montage ends with the three of them, (and Ms. Baker), yelling in frustration.

On Monday at school, Clarence asks Sumo and Jeff if they finished their turtle hats project, they tell him they didn't, and Clarence didn't either, leaving the three of them sad, until Clarence comes up with an idea, which he tells to the other two. An exhausted Ms. Baker enters the classroom and sees the children making stuff at their desks, this causes Ms. Baker to have a flashback to Friday where she accidentally told the class to do a project on turtle hats, then she begins to worry. Suddenly, Mr. Reese enters the classroom to see what assignment Ms. Baker told the students to do for teacher evaluation time. Ms. Baker is surprised because she had forgot about teacher evaluation, then Mr. Reese takes his seat on Percy's desk. Ms. Baker is nervous, but she tells the students to get started showing their projects. The children present a whole bunch of wild and wacky projects related to turtles and hats. When Percy finishes reading his incomplete poem, Ms. Baker asks if there's any more presentations, and Clarence tells her that it's his, Jeff, and Sumo's turn next. Clarence stands in front of the class, then the three present a story similar to the "President Ralph" movie, but with Clarence being a turtle.

When their story is finished, the other students cheer, and Mr. Reese tells Ms. Baker that while the project was unexpected, he really liked it, so he started shaking her hands, but he takes awhile to let go. Ms. Baker is surprised and relieved about the results, and Mr. Reese leaves the room. Ms. Baker sees that the students are tired so she allows all of them to put their heads on their desks and take a nap. Suddenly, a text shows up on Ms. Baker's phone, it's from Trey again, and it says that he meant to type "Totally hot", not "turtle hats", then another text from him appears saying, "WHOOPS! WRONG PERSON." and Ms. Baker deletes Trey from her contacts, ending the episode. 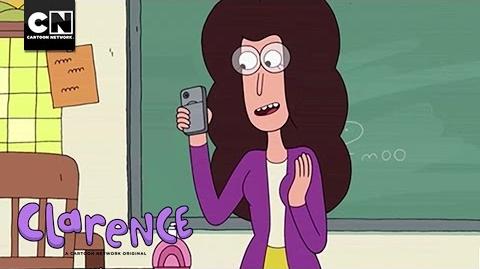 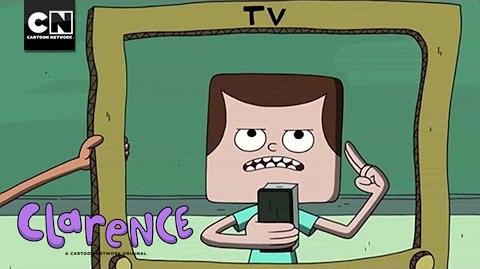 Retrieved from "https://clarence.fandom.com/wiki/Turtle_Hats?oldid=92365"
Community content is available under CC-BY-SA unless otherwise noted.