Tuckered Boys is the 43rd episode in Season 1 of Clarence.[1]

Jeff is all set to go to bed so he can wake up for the early morning meteor shower when Clarence suggests the unthinkable: What if they stay up – all night long?! As the boys struggle to stay awake, their reality starts to slip away as sleep-deprivation induced hallucinations play tricks with their heads.[2]

The episode begins in Jeff's room, where Clarence and Sumo does a staring contest, Sumo ends up winning, but only because he spaced out. Jeff is shown looking through a telescope, and Clarence wonders if he's spying on someone, then Jeff explains that there's going to be a meteor shower at 4:00am. Jeff shows Clarence and Sumo infomation about the meteor shower on the computer. Sumo sees an option on the screen to report a fireball, and wants Jeff to click it, but Jeff tells him he can't file a false report. As Jeff continues talking about the meteor shower, Clarence looks through the telescope and sees a guy working on a telephone pole, and Jeff hopes the guy will be finished before the meteor shower starts. Soon, Jeff pushes Clarence and Sumo out of his room because it's time to go to sleep, he tells them to come back at 3:45 when he's nice and rested, then he shuts the door. When the watch says 8:00pm, Jeff turns off the lights and closes his eyes, at that moment, Clarence shows up and suggests they stay awake all night long, Jeff doesn't see the point at first, then Clarence talks about the possibility of Jeff having a dream where he thought he woke up, but really didn't, and miss the meteor shower. Jeff thinks Clarence has a good point, and he agrees to stay up all night, and Clarence and Sumo celebrates. Later at 10:00pm, Sumo balances on a chair, and Clarence eats popcorn. When Clarence finishes the popcorn, he asks Jeff if it's 4:00 yet, and Jeff says it isn't. Clarence gets disappointed because he's getting bored, and Jeff mentions that he's having fun, reading a book about the great historical masterminds of astronomy. Sumo shows up to say he's hungry, and suggests they get hamburgers, Jeff thinks it's a good idea because going outside will help him familiarize himself with the stars, just like Copernicus, who he shows to the others in his book.

Outside, Clarence spins in circles down the sidewalk, Sumo hits things with a stick, and Jeff looks for constellations. Clarence falls down, and points out a meteor in the sky, which turned out to be an airplane. Sumo sees a bat and chases it, the bat gets away and Sumo bumps into a garbage can, which angers him, so he hits it with his stick. Randy's dad shouts out the window to complain about the noise, and the boys run away. Clarence sees the gas station store, "Nite Bites", and he tells Jeff and Sumo to come inside, Sumo joins him, but Jeff stays outside. When the two enter the store, Clarence looks up at the TV, and says Sumo looks tired, but Sumo, not wanting to admit he's tired, pulls his shirt collar over his face and walks around the store, knocking things over in the process. Clarence goes up to the counter with a pair of red sunglasses on, and asks the man who works there for energizing snacks because they're staying up all night. The man guesses they're trying to get into trouble, and laughs a bit. Sumo picks up a lot of ketchup packets, and stomps on him. Outside the store, Jeff has to use the restroom, but it looks very dirty. Inside the store, Clarence looks at the hotdogs, and imagines one of them having his face. Clarence asks Sumo if the store is getting freaky, or it's just him, and Sumo explains that peoples' minds can play tricks on them if they stay awake all night. Clarence wonders if Sumo's mind is doing that too, and even though Sumo sees everything wiggly, he says "no." Outside the store, Jeff tries really hard to get himself to go into the dirty restroom, when he opens the door, he sees a head on the floor, and runs off screaming, until he crashes into a lamppost, knocking him unconscious. When Jeff opens his eyes, he finds himself in the woods, riding inside a grocery cart with Clarence while Sumo pushes it. Jeff wonders where they are, and realizes he lost his pants. Clarence explains that they took his pants off because he peed himself, and that even though they got a little lost, they have a toy frog called "Mr. Junior" as their guide. Jeff gets mad and kicks Mr. Junior, upsetting Clarence, then Jeff grabs his map to try and navigate their way home.

A little while later, the boys are still in the woods, and Sumo slaps himself to stay awake. Suddenly, one of the grocery cart's wheels gets stuck in a tree root, and Clarence suggests they ask the tree for directions. When he puts his hand on the tree truck, his arm becomes a part of the tree, but it turns out he's just hallucinating. Sumo eats something from a tree, and Jeff tells him to spit it out, but Sumo swallows it and starts poking Jeff's face because he thinks he's changing the shape of his head. Jeff gets really angry and says he will not let Clarence and Sumo ruin this special night for him, then Jeff begins hallucinating too, and thinks he sees Copernicus in the woods, calling his name. Jeff follows him and knocks down the grocery cart. Clarence tells Jeff not to run off, then he sees the grocery cart and Mr. Junior sinking in the mud, and Clarence rescues it, then he tells Sumo to hold Mr. Junior, only to find out Sumo had disappeared. Clarence asks Mr. Junior to tell him where Sumo went. When Clarence puts Mr. Junior down, he sees it's head wobbling and coming off it's body, and Clarence guesses the direction Sumo went, and gets up to start looking for him, leaving a long trail of his colors behind him. Sumo shows up and eats one of Clarence's colors, but he spits it out on a leaf, which grows eyes and legs, and begins walking around. Sumo decides to stomp on it, then he imagines other small things walking around, and he stomps on them too. Meanwhile, Jeff peeks his head through a bush and sees Copernicus. Copernicus tells Jeff to walk with him, and Jeff gets excited. As Clarence looks at a rainbow portal, a couple of bunched-up Clarence heads pops out of his shoulders, and Clarence accidentally kicks Mr. Junior into the portal, so Clarence decides to jump inside, but it turns out it's just a regular rain puddle. Jeff and Copernicus continue walking through the woods, and Copernicus talks to him about things, then he tells Jeff to look up at the stars. Jeff imagines a bunch of giant colorful stars filling up the entire sky, then Jeff and Copernicus' heads float around while stars fly out of Copernicus' eyes.

While Sumo stomps on more tiny objects, Sumo's head changes shape, and he grows a giant tongue, which he uses to eat the tiny objects, but in reality, he's just eating leaves while looking completely normal. Jeff imagines he's jumping on stars in a fantasy star world, and Copernicus tells him he has to do an important mission; finding his missing constellation. Clarence imagines his fingers are growing really long and puting his hair, nose and eyes in his mouth, and replacing them with a big blue nose and eyes that don't match. In Jeff's star fantasy world, Jeff completes the missing constellation; a picture of Copernicus' head. Copernicus congratulates Jeff, and just when he's about to give him something, Clarence's head appears and knocks Copernicus down. Jeff gets mad at Clarence. Suddenly, Clarence appears as a floating green alien, making popping sounds with his mouth, and Jeff tells him not to come any closer, and he knocks Clarence down. Jeff continues running on stars in his fantasy world, and he finds Copernicus. Copernicus takes his hair off and begins handing it to Jeff for his exceptional work, but at that moment, Clarence calls Jeff's name in reality, causing Copernicus to disappear, and Jeff starts digging in the dirt to find him. Clarence runs up to Jeff, who he imagines has a computer for a head, and Jeff sees Clarence as a pig. Clarence tells Jeff he can't find Sumo, then Jeff complains that Clarence has been making everything worse all night, and he tells Mr. Junior to be quiet, which upsets Clarence again. Jeff yells really loud, then Sumo shows up and he and Clarence begins yelling too. Clarence throws Mr. Junior on the ground, and they all run out of the woods, and into an empty football field, where they all lay on the ground. Clarence asks why Mr. Junior left him, Sumo tells the tiny objects with legs that they've won, and Jeff says staying up all night was the worst idea ever. Jeff begins closing his eyes, and at that moment, Jeff opens his eyes wider because he saw a meteor, he tells the others, and they get up to see the meteors too. The three thinks the meteor shower is amazing, but it turns out they were just imagining it, and Randy's dad is heard complaining about a fire. When the boys go back into Jeff's room, Jeff says staying up all night was the best idea ever, and he decides to report a fireball on the computer, but when he has to type in his name, he falls asleep on the keyboard and puts a long line of the letter "y" after "Jeffrey", and the episode ends with Copernicus making a star come out his butt. 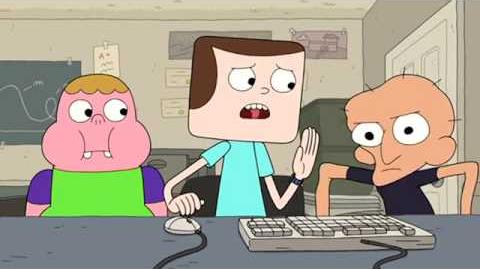 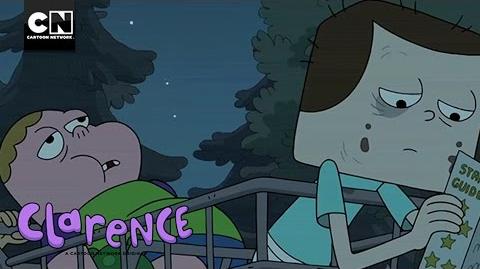 Retrieved from "https://clarence.fandom.com/wiki/Tuckered_Boys?oldid=91096"
Community content is available under CC-BY-SA unless otherwise noted.