Trampoline is the 28th episode of Season 3, and the 124th episode overall of Clarence.

Mary buys a new trampoline for the family, but an accident lands her on the couch for a while. Determined to fight the boredom of being stuck indoors, she discovers her neighbor may be hiding something exciting.

The episode begins at Clarence's house, Randy throws the diary and Clarence looks out the door, at which point Ms. Mushburgur arrives. Mary passes the lady and she tells him about his life. She then asks her to be alert to special packages that will arrive at her house and Ms. Mushburgur shows her her keys. Clarence discovers that there is a trampoline in the yard and is very happy to see it, so Ms. Mushburgur leaves.

Clarence starts jumping while Chad and Mary watch. Clarence believes that Ms. Mushburgur is a witch, Chad defends her theory because she remembers an occasion when she ate a book. Chad wants to go watch TV, but Mary reminds him that he had to cancel to pay for the trampoline, so they both get on the trampoline. Quickly Chad and Clarence get tired, but Mary keeps jumping, at dinner time, Mary lingers on the trampoline, but she falls and breaks a leg.

Then Mary is in the chair playing with Clarence. Chad appears with an antenna and manages to establish public access television, so the three observe the strange program about a play. Mary is reading a book while Chad and Clarence go to play with the trampoline, but Mary does not understand the book and stands in front of the window to see the neighbors. At that moment, Miss Ms. Mushburgur's special packages arrive, Mary picks them up and takes advantage to explore her house, which is much bigger and more luxurious than hers.

Mary leans back in the chair to watch television, but then it's late and she returns home. At the same moment Clarence and Chad arrive with pizza and watch another public access television program. The next day, Mary gives a list of tasks to Clarence and Chad as an excuse to be left alone and to go to Ms. Mushburgur's house. Then there is a sequence in which Mary enjoys television while Chad and Clarence have fun doing the tasks Mary ordered them to do.

Mary spills gas on her shirt and is forced to take a bath in Ms. Mushburgur's house. But when it comes out, the lady comes in and Mary accidentally throws one of her crutches, so she hides in Ms. Mushburgur's room. Chad and Clarence jump on the trampoline and find Mary leaning out the window, who asks them to come rescue her. Chad proposes a rescue plan in which Clarence goes down the chimney and rescues Mary, but gets stuck in the ceiling.

Chad tries to jump towards the roof of Ms. Mushburgur's house but the trampoline goes forward and breaks the fence. Ms. Mushburgur enters the room and Mary skilfully escapes, but then finds her and Mary falls down the stairs. Then Clarence and Chad arrive, Mary opens the door and faints.

Later, the three are in the armchair, Mary with both legs broken. On television, the program of Ms. Mushburgur is shown. 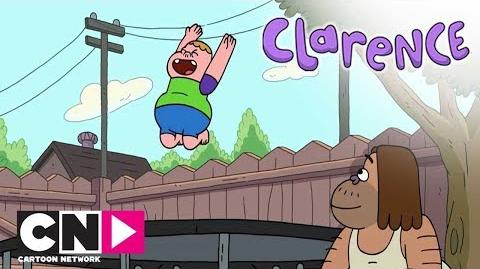 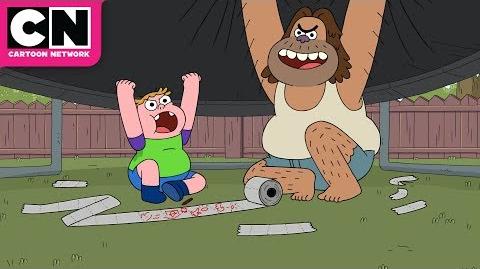 Clarence Trampoline Cartoon Network
Add a photo to this gallery

Retrieved from "https://clarence.fandom.com/wiki/Trampoline?oldid=89869"
Community content is available under CC-BY-SA unless otherwise noted.