Too Gross For Comfort

Too Gross For Comfort[1] is the twenty-third episode in Season 1 of Clarence.

Chelsea, a girl from school invades the school boys' treehouse, and they must gross her out so she leaves.

The episode begins in the treehouse where Julien, Sumo, Dustin and Emilio are racing lobsters, which doesn't go so well. Sumo's lobster ends up winning because it put it's claw ahead of the other lobsters. During breaktime, the boys prepare the lobsters for the next race. Dustin places a tiny skateboard under his lobster, but Jeff notices and disqualifies him, then Clarence arrives at the treehouse with Chelsea. The other boys are in shock and Jeff blows his whistle because girls aren't allowed. Clarence explains to Chelsea that their treehouse is cool because there's nothing too gross or too scary to be in it, then Sumo adds to that by showing Chelsea where the door is if she can't handle gross things. Chelsea tells them she can handle gross things, but Sumo doubts it, then the boys start cheering for Sumo. Clarence gets nervous and borrows Jeff's whistle to announce an emergency huddle. As the boys talk to each other, Clarence argues that just because Chelsea's a girl, it doesn't mean she can't be in their treehouse, but Sumo disagrees, then Sumo decides that they should see how much gross things Chelsea can take, and the other boys agree, except for Clarence, and Jeff too who suggests they should play games instead, then Chelsea interrupts to tell them she can handle anything gross thing they think of, and Sumo still doubts it.

A few moments later, the boys start showing Chelsea many different things, but Chelsea is not grossed out by any of it, then Clarence shows Chelsea his bag full of cat eyes, but he then reveals that they're actually just marbles, and Chelsea tells him they're cool. Jeff thinks everyone should stop thinking about gross things and look at some neat things instead, so he shows them an uncracked geode, but then he accidentally drops the geode and it cracks open, releasing a horrible smell. Clarence thinks Jeff should look at the smelly goo from the geode, but Jeff is outside the treehouse, vomiting. Sumo tells Chelsea to join him, but Chelsea isn't grossed out in the slightest. Clarence smells the goo and starts telling a story about how he was friends with a goose who laid eggs, and that he saw the goose in the forest everyday for 3 months, then suddenly, the goose was gone one day and left only one egg by the nest, and when he picked up the egg and gave it a tiny tap, the egg exploded and released a bunch of green goo which went into his mouth. Clarence tells everyone that he threw up every time he thought about that, and the other boys are grossed out while Chelsea isn't.

Sumo tells Chelsea that he has stories so gross, they'll make her wish she could erase her brain, then Chelsea says that her stories are so gross, they'll melt Sumo's brain, and that's when Clarence gets the idea that they can all tell gross stories for fun, the others agree and Emilio starts first. He tells a story about his sister who is afraid of everything, and how he jumped out the closet to scare her. Emilio's sister screams and slams the closet door on him, which hits his foot and makes her scream even more. Emilio exaggerates saying that there was blood everywhere, which causes Jeff to feel queasy again, but Chelsea isn't grossed out, then Clarence suggests that Sumo goes next, but Sumo says he isn't feeling it right now, then he spits on the floor as another attempt to gross Chelsea out, but then Chelsea does it too. Next, Julien tells a story about how he got taken to the hospital after something bit his arm, and that the doctor had to use tweezers to pull a worm out of his arm. The boys cheer Julien on for the story, and Chelsea agrees that his story was pretty gross, but then she tells them that she's already seen things like that on internet videos. Jeff is unhappy because he can't get that image out of his head, then Clarence tries to get Jeff to tell a gross story. At first, Jeff is unsure if he should tell it, but he does anyway. Jeff tells a story about how the drain was backing up while he was taking a shower and he tried to avoid the raising water from touching him, but he soon had nowhere left to stand, causing him to scream. Chelsea asks him what happened next, and Clarence continues the story saying that the water flooded the whole house and everyone was barfing all over the place, but Jeff tells him that didn't happen. Everyone wasn't amused by Jeff's story, so he decides to tell it again, until Dustin interrupts to announce that he has a story to tell.

Dustin tells a very quick story about how he had a dream where he fell off a boat and got stuck in the ocean, but the story turned out to be a joke, then Clarence tells a very confusing story about himself walking through a field of broccoli and worms, and sees a two-headed tiger made of garbage with goo, peanut butter, jelly and other things inside it's body. Everyone in the treehouse stares at Clarence, then Sumo finally decides to tell his gross story. Sumo's story is about his family driving to Florida and they stop at a place called "Fishy Phil's" to have lunch, but the place was 200 miles from the nearest body of water, so Sumo says getting the food was a big mistake, then Chelsea interrupts his story to guess that his whole family got sick. Sumo gets mad that she predicted the ending, then he asks her what gross stories she's got. Chelsea tells a story about how she jumped on a trampoline, but then Sumo predicted the ending, so Chelsea asks him if he's got anything better, then the two continuously tell different stories but interrupting each other to say that they have already heard it. Suddenly, Chelsea and Sumo kiss and grosses everyone out, except for Clarence who is happy and thinks they're in love, then Chelsea and Sumo runs out of the treehouse screaming. As the others are throwing up outside, Clarence continues talking about Sumo and Chelsea being in love and how they are going to have kids together, then Clarence goes back inside the treehouse and happily plays with the lobsters all by himself, ending the episode. 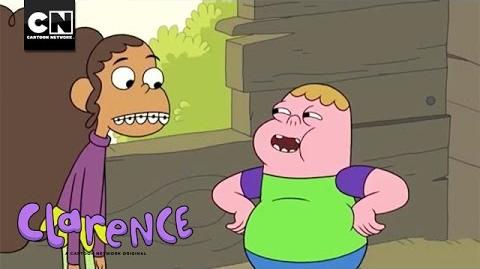 No Girls Allowed I Clarence I Cartoon Network 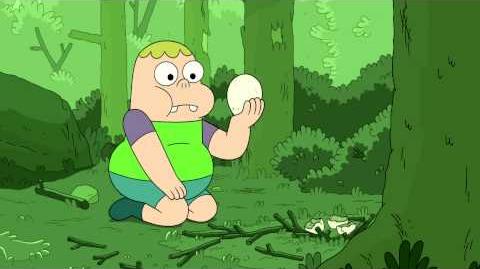 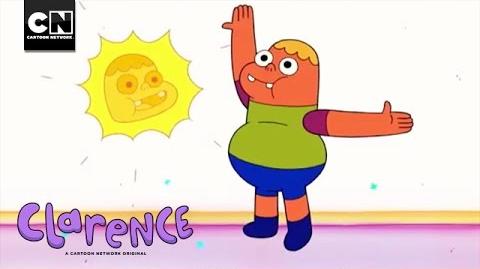 Retrieved from "https://clarence.fandom.com/wiki/Too_Gross_For_Comfort?oldid=87789"
Community content is available under CC-BY-SA unless otherwise noted.