After Clarence accidentally drops Belson's new videogame down a storm drain, Belson enters a sewer tunnel to retrieve it.

The episode begins with Clarence and Sumo watching a commercial for a fight program called "Aww, Snap" through the window of a TV store. The two wrestlers, whose physical attributes coincidentally resemble that of Clarence and Belson, are seen arguing with one another. Mr. Reese then arrives with his metal detector, collects a can of soda, and places it in his garbage bag.

Once Mr. Reese leaves, the children notice Belson on a bench across the street playing a new game he presumably had just bought. Clarence, concerned about him being "all by his lonesome", eagerly rushes over to greet him. After complementing him on his light-up shoes, he invites him in watching "Aww, Snap" with himself and Sumo. Belson declines and claims the show is "for babies", offending Sumo in the process. He brags about being the first to beat the game he's playing, boasting how he ordered an expensive Japanese beta copy. Clarence, interested in the videogame, impulsively takes it out of Belson's console only to accidentally drop it down the drain. Belson is furious, but Sumo is amused by it. He laughs and asks Clarence to go with him to his house to see "Aww, Snap" again.

However, Belson protests and declares Clarence isn't going anywhere "until he gets his game back." Clarence attempts to recover the game through the gutter, but to no avail. In response, Belson bemoans Clarence's uselessness in a fit of exasperation. He demands that he continues his search and drags the two of them to the opening of the drainage tunnels, which he makes a point to mention were built by his father. Sumo warns Clarence not to go inside, but he insists out of his affection for Belson. However, due to the darkness, Clarence leaves the tunnel as fast as he enters. Impatient, Belson rules to search for the game on his own and switches on his gaming console to light the way. Once he disappears into the darkness, Sumo retorts "Bet you'll never see him again." Clarence disagrees, but becomes distracted and forgets about Belson when Sumo invites him to watch their show together. Once they leave the shot, Mr. Reese briefly wanders onscreen with his metal detector before the scene comes to an end.

In the following shot, Belson appears to be searching inside of the tunnels, grumbling to himself. To contrast against Belson's situation, Clarence and Sumo are suddenly shown having fun on their journey to Sumo's house with videogame-esque sound effects and a "Score Bar" present at the bottom of the screen. The camera shifts back to Belson's point of view, a score and lives lingering at the top of the screen to maintain the gaming motif. His portable console suddenly runs out of battery, causing one of his "lives" to disappear. He quickly turns on an old cell phone as an alternative means of lighting the way, but he accidentally drops it, causing yet another one of his "lives" to disappear. The scene changes back to Clarence and Sumo for a brief moment, calling back to the first time we saw them having fun. Once again, we return to Belson, this time using a dim laser pointer. Talking to himself, he shows signs of regret, questioning if he ever should have gone to the sewer in the first place. Once again, his device quickly runs out of battery and shuts off. The perspective changes again to Mr. Reese , who is outside picking up a bottle cap with an "interesting fact" on the inside.

Belson is next seen expressing confusion about his location and is using his shoes to light up as a last resort, but they, too, fail him, leaving him nothing to illuminate with. Alone in the pitch black tunnel, Belson's emotional vulnerability becomes obvious when he calls for Clarence and Sumo. The scene shifts to the Sumowski household where Clarence, Sumo, and three of his siblings are watching "Aww Snap". The fighters are about to start, but end up waxing nostalgic about their old friendship. The man resembling Belson expresses how the other man "left him all alone in the dark" and Clarence is suddenly reminded of Belson's situation. The wrestlers reconcile and hug it out, enraging the arbiter of the game. The fighters are then shown working together to defeat their opponent.

Clarence, worried about Belson, phones Cynthia and asks if her son his home. When she confirms that he isn't, Clarence is terrified. After he hangs up, he turns to Sumo and insists that the two go back for him. Sumo protests in favor of their show, but Clarence is persistent. In the next shot, Clarence and Sumo are taping flashlights to their heads in preparation to find Belson. Before they depart, Sumo's younger sister, Brandi, gives Clarence a wrench for self defense.

The following scene takes us back to the dark tunnel where Belson is crying alone, listing off his material possessions that he fears he can't go back to (one of his game consoles, his racecar bed, inheritance, etcetera). He notices a distant figure lurking in the shadows and promptly screams in fear.

Clarence and Sumo are now within the tunnel, active in their search. They notice Belson's footprints and deduce that he's nearby. Soon after, the two find him hunched over on the ground crying to himself. Despite his previous attitude towards them, he appears to express genuine gratitude for the two having found him. Still crying, he exclaims "You guys found me! Oh man, I'm so happy that--" before he hesitates and follows up with "Uh, I mean... what are you dorks doing here? Nobody called you." Embarrassed for having expressed himself, he quickly returns to his fabricated, dismissive attitude, and accompanies them in finding the exit. On their way back, Clarence spots Belson's game and retrieves it. Without so much as a thank-you, Belson eagerly snatches it from his hand. Suddenly, the silhouette of Mr. Reese approaches, for which the trio mistake for an armadillo monster. They rush to a nearby ladder and climb it in an attempt to escape. At the top, Clarence accidentally lets go of Sumo in his effort to hoist him up. Sumo falls and bumps into Belson, causing him to let go of his game cartridge. In this moment, Belson has a split second to choose between saving Sumo and saving his game. He chooses Sumo by grabbing onto his arm before he hits the ground, and Clarence swiftly hauls Belson up from the opening, dragging Sumo along with him. After the three have safely made it outside, Clarence is touched by Belson's heroism and thanks him for saving Sumo. A shocked Sumo does the same, expressing how he "was a goner for sure." Belson responds with insisting "nothing happened" and then chastises Clarence for still owing him the costs of his game. He starts his way back home, leaving Clarence, Sumo, and his game cartridge behind. "There goes Belson," is what Clarence says before the final scene opens up.

The camera returns to Mr. Reese, still in the sewer, clad with metal detecting gear. He notices Belson's game, but writes it off as garbage before tossing it back onto the ground. The final shot is a closeup of the cartridge with "The End" written on it.

This episode may be a metaphor for Belson's internal struggles and character development. Him getting lost in a dark, confusing tunnel constructed by his rich, powerful, and emotionally distant father could be referencing the dysfunctional relationship he has with him. The more he relies on gadgets and material possessions to guide him, the more isolated he becomes, which is a direct parallel to how he copes in real life. What ultimately saves him are friends that care about him, resulting in Belson choosing saving one over his video game. This could be a hint that Belson is beginning to acknowledge friends in his life as priceless and prioritize them over his excessive materialism. 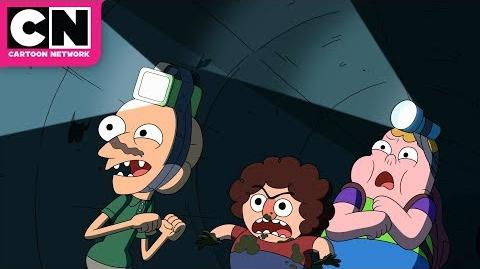 Clarence The Tunnel Cartoon Network
Add a photo to this gallery

Retrieved from "https://clarence.fandom.com/wiki/The_Tunnel?oldid=92258"
Community content is available under CC-BY-SA unless otherwise noted.