After he accidentally trades away Chad's favorite baseball card, Clarence transforms into a slick salesman to get it back.

The episode begins with Clarence outside his house eating yogurt. Then Sumo arrives with a stick in his mouth and Clarence wants to have it, so he offers several things to trade for Sumo's stick, but Sumo doesn't want anything Clarence offers. Clarence then tries trading a baseball card for the stick. Sumo doesn't want it at first, but then he gets bored with the stick and finally accepts the card.

Later, Clarence is seen blowing a whistle in the living room. Chad arrives desperately looking for his lost baseball card, which is the same one Clarence traded away. Chad starts explaining how his grandfather was good friends with the guy on the card, Salty Duncan. Clarence feels bad that he traded away a card so special to Chad, but doesn't admit it. Clarence goes out into the yard and asks Sumo if he can trade the card back, but Sumo had already traded the card to Camden, who traded it to Darlie, and Darlie traded it to Belson.

Clarence and Sumo goes to Belson's house to trade him something for the card. Belson isn't interested in anything Clarence offers. Clarence looks up at the TV and sees a show called "The Infatuation Boat" and asks Belson if he wants a boat. Belson decides that he'll trade the card if Clarence can get him a boat. Clarence starts trading things with people around town until he was finally able to get a huge boat for Belson.

Clarence gets Dale to put the boat in Belson's pool. Clarence shows Belson that he got him a boat, but Belson says the card is not for sale even though they had a deal. Clarence gets Dale to move the boat out of Belson's yard, and returns home. Chad is surprised to see Clarence on a boat being towed by a truck, so he goes outside to see what's going on. Clarence tells Chad that he found the baseball card, but he gives Chad a fake card because he didn't have the real one. Clarence can't take it anymore and finally tells Chad what really happened to the card.

Chad tells Clarence that he has the same problem; he traded away Mary's old wooden coffee table that's been passed down from her great-grandmother to Gale, and he can't get it back. Clarence and Chad goes to Gale's house and tries again to get Mary's table. First, they try and trade her the boat for the table, but she refuses. Then they try and trade a stick for the table, Chad shows how she can use it as a back scratcher. Gale takes the stick and starts scratching her back with it, and while she's busy scratching, Clarence and Chad takes the table and leaves. When they arrive home, Mary shows them a new, modern coffee table that she just bought, and she says that they can just throw away the old one.

Chad and Clarence go to Belson's house to try and trade the old table for the card. Belson does not want the table, so Chad puts the old table on Belson so he can't escape, and Clarence runs up to Belson's room, takes the card and runs home. Belson gets out from under the table and sees that the boat broke his pool. Dale demands that he gets paid, and Belson gets upset, ending the episode.

The gallery for The Trade can be found here.

The transcript for The Trade can be found here. 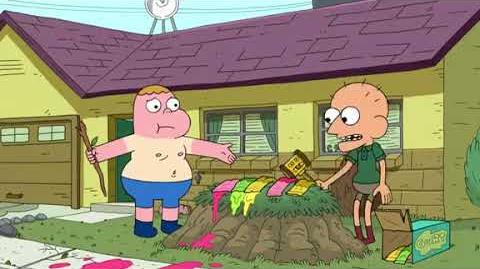 Clarence US S03E25 The Trade
Add a photo to this gallery

Retrieved from "https://clarence.fandom.com/wiki/The_Trade?oldid=90869"
Community content is available under CC-BY-SA unless otherwise noted.