The Tails of Mardrynia is the 15th episode of season 2, the 66th episode overall of Clarence.[1]

After reading a book about a mystical animal society in class – Clarence is inspired to round up local animals and recreate an animal world of his own, to cheer up his friend Percy. But will Percy take the game too far?[2]

The episode begins with Miss Baker reading a story that the whole class seems boring, although Percy likes it, he asks if the animals in the story are real, the children and Miss Baker explain that it is just a story Clarence tells him it would be great if they were real.

Later, Percy arrives at the Clarence house, there, Clarence shows him that he made an "animal world" in his garage and they both spend some time having fun with the animals, Later, Clarence goes to ask for pizza, he explains to Percy that they can not take the animals, so he becomes sad.

When Clarence finishes paying Dale, realizes that Percy is not there and enters the garage, there, Percy imagines him feeding the animals with a feast of food, but it turns out that the animals were eating the pizza, then Clarence scolds Percy for that and gives him a bath, Clarence explains that they should not give the pizza to the animals, when the bathroom is over, Clarence puts a shirt on Percy in his room, at bedtime, he is somewhat saddened by not being able to stay with the animals.

Later, a montage by Percy is shown imagining him and the animals destroying " The Pink One ", then Clarence wakes up and takes the animals out, Percy starts crying and tells Clarence that he wants to live in a "magical world", at that moment, Clarence gives Percy a typewriter so that he can write his story. The next day, Percy reads his story, but nobody likes it, all of a sudden, one of the beetles gets into Belson's eye, causing everyone to laugh and the episode ends. 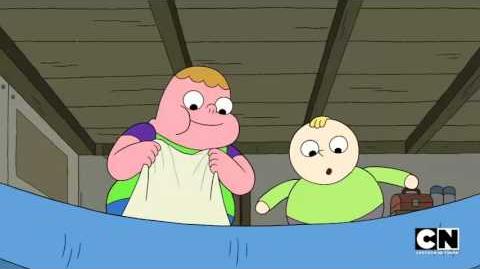 Retrieved from "https://clarence.fandom.com/wiki/The_Tails_of_Mardrynia?oldid=92220"
Community content is available under CC-BY-SA unless otherwise noted.