The Forgotten is the twentieth episode in Season 1 of Clarence.[1]

Clarence gets left at school and Brady tags along on his journey home.

The episode starts with Clarence telling Heida that he drew her, he then shows her that he drew he as a mummy, where Heida when her father picks her up, he then tries to draw Darlie.

He plays with a ball with Percy, he tries to get stuck with Belson and Guyler. Brady thinks of Clarence talking to people and wishes that he is in his place. He looks at Mavis and thinks she is beatifull, they all go home except Clarence and Brady. Clarence looks to Brady and tries to guess his name, and gives him milk. Clarence tells him that his teeth are like xylophone. Clarence asks Brady who will pick him up, he mentions that Chad is picking him up, while Chad is watching TV.

Clarence says that they forgot him and Brady. This makes Brady think that his parents forgot him. Clarence takes him to his home. They were walking in the street. Clarence finds two sticks, and asks him which one to choose. He takes the bigger one. He takes everything in the ground to his bag, suggesting that every thing is helpful.

He puts a big piece of wood in his bag, hoping for fire, suddenly everything in the bag falls, ripping the bag. Clarence mentions Dennis while looking in the garbage. He finds spaghetti, he gives Brady some and starts to eat. Chad remembers something and goes running, then comes back saying "I'll clean the bathroom later".

Clarence and Brady start climbing, Brady wonders, whether or not Clarence lives in the mountain. Clarence grabs Brady and they both watch the nature, the sunsets and Clarence sleeps, then wakes up. It started to rain an they both hurry. They go to a tunnel wearing nothing but underwear. Suddenly a man enters and kick them out.

Chad was watching that, and remembers, he looks to a box's shadow and thinks he is Clarence. Clarence starts fishing in the street Brady stops Clarence, then Clarence suggests to zip line over the city to see their houses.

Brady goes to a bus stop and sees the map. They ride a bus, Brady mentions Mavis, and says that he will finally talk to her. They both get home, the next day Brady wanted to talk to Mavis, but Clarence comes and scares her. At the end, it turns out to be a TV show which the man watches, and all the Clarance characters dance on the roof, which is a reference to the popular show Peanuts. 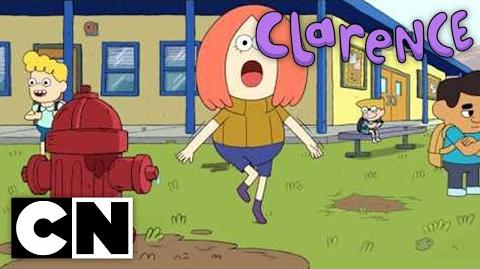 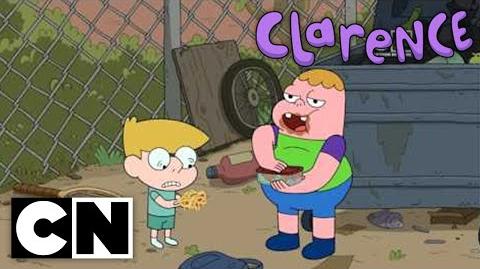 Clarence - The Forgotten (Clip 2)
Add a photo to this gallery

Retrieved from "https://clarence.fandom.com/wiki/The_Forgotten?oldid=92357"
Community content is available under CC-BY-SA unless otherwise noted.