The Break Up is the 48th episode in Season 1 of Clarence.[1]

When Jeff and Sumo vow to stop speaking after an argument, Clarence makes a plan to get the friends back together, but he only aggravates the problem.

The episode begins with Jeff and Sumo making a stop-motion movie with their toy figures, and Sumo has trouble posing the figures the way Jeff wants, then Clarence is shown playing with a dinosaur made of mud. Sumo and Jeff are shown again, and Sumo starts moving one of the figures too fast. After Jeff explains that the figures have to move more slowly, Sumo suggests that they smash eggs instead. Sumo smashes an egg, and it splatters all over the toys. Jeff gets upset and questions how they're going to explain the mess appearing out of nowhere in the movie. Sumo comes up with the idea that there was an "eggplosion", but Jeff argues that they need to have the explosion captured on camera for it to make sense, then Sumo throws an egg at Jeff's camera, this makes Jeff really angry, and the two argue even more, and start fighting each other too. Clarence makes his mud dinosaur tell them to stop fighting, but it was no use. Soon, Jeff and Sumo decide that their friendship is over, and they both leave Clarence's yard.

The scene cuts to Clarence grabbing a snack out of his refrigerator. When he closes the freezer door, Sumo suddenly appears on the counter, asking Clarence if he wants to hang out. Clarence is surprised to see Sumo because he thought he left the house after having that argument with Jeff. Sumo wishes to not talk about Jeff, and while Clarence tries to convince Sumo of how great Jeff is, Sumo interrupts and asks him if he wants to smash some eggs. Clarence agrees to do it, then the two are shown running around outside and throwing eggs everywhere. Later, Clarence returns home and says goodbye to Sumo as he leaves. Suddenly, someone knocks on the door, and Clarence answers thinking it's Sumo, but turns out it's Jeff, and he wishes they don't talk about Sumo. Jeff shows Clarence a movie he brought for them to watch, "Lil' Grandpa". Jeff and Clarence watches the movie for awhile, and Jeff points out a mistake in the movie, and when the movie's over, Clarence says goodbye to Jeff as he leaves the house.

Later, Clarence lies on his bed when he suddenly hears a knock on the window. Clarence goes to see who it is, and it turned out to be Sumo with more eggs to throw. Clarence and Sumo throws the eggs around town and have fun doing other things too, and just like before, Clarence soon returns home and says bye to Sumo, but strangely, Jeff is already in Clarence's living room and asks him if he wants to see some magic. Jeff puts on a magic show, then a montage starts, showing Clarence having fun with Jeff and Sumo separately at different times. Clarence gradually gets tired after awhile, and he tells Jeff that things will be more fun with Sumo, but Jeff disagrees. Clarence tells Sumo the same thing, and Sumo also disagrees, then the two are shown saying bad things about each other when the other one isn't around, and that's when Clarence decides he has to get Jeff and Sumo to become friends again.

Later, Clarence is shown drawing a picture as "Lil' Grandpa" plays on his TV, and it shows a scene where a couple is getting back together with the help of a romantic dinner, this gives Clarence an idea. In the backyard, Clarence sets up a dinner table, and when he finishes, he talks for an imaginary Jeff and Sumo, making them make up and become friends again. Meanwhile, Sumo and Jeff arrives at Clarence's house for the fancy dinner, and they are surprised to see each other there at the same time. Jeff quickly figures out what Clarence is trying to do and says that Clarence has been watching too much "Lil' Grandpa". Sumo says that Clarence learned from the best, which causes the two to start arguing again, and Sumo knocks Jeff's jello onto the road where a car runs over it, then they leave Clarence's house in anger. In the backyard, Clarence had just finished eating all the food he prepared for Jeff and Sumo and realized that Jeff and Sumo never came.

Clarence goes to Jeff's house to ask him why he didn't show up, but to his surprise, Jeff looks miserable and he has depressing music playing in his house. Clarence asks Jeff if he's okay, and Jeff tells him he's just fine. Clarence follows Jeff into his bedroom where he sees Jeff neatly mashing eggs inside napkins and acting very weird, but Jeff still assures him that he's just fine. Jeff hands Clarence a box of Sumo's belongings for him to return to Sumo, then he demands Clarence to leave his house. Later, Sumo is shown riding in a wagon and looking at a picture of him and Clarence having fun with Jeff to reflect on all the good times, but when Clarence shows up, Sumo eats the picture and asks what the box is for. Clarence explains that it's full of his stuff that Jeff wanted to return to him. Sumo becomes interested and starts asking if Jeff said anything about him, but he quickly pretends he didn't ask that so Clarence doesn't figure out that he misses Jeff. Clarence can already tell that Sumo and Jeff miss each other, and says that they really need to become friends again. Sumo denies that he's sad, and says that Emilio is his new friend. Clarence thinks for a second, then asks Sumo if he wants to play "human yo-yo". Sumo agrees to play, and Clarence ties up Sumo with a garden hose, but instead of actually playing human yo-yo, Clarence takes the tied-up Sumo with him to see Jeff.

In Jeff's backyard, Jeff draws Sumo's face on multiple egg shells, and suddenly, Clarence and Sumo come zooming in their wagon. When they fall out, Jeff tells Sumo that he never wanted to see him again, and Sumo tells him that Clarence dragged him there. Clarence tries to put a stop to the arguing once and for all, so he uses handcuffs to keep the three of them together. Jeff and Sumo gets angry and they try to break out of the handcuffs. Sumo becomes a wild animal and runs up a tree to break the handcuffs with his sharp teeth. Jeff tries using a twig, and soon, Jeff and Sumo breaks free, but falls on the ground. When Sumo and Jeff looks up, they start laughing at Clarence who is still hanging on the tree. Clarence laughs too, but wonders what they're laughing about. Jeff apologizes to Sumo for being a jerk, and Sumo apologizes as well, then he notices an egg with a face drawn on it and wonders if that's supposed to be him, Jeff confirms that it is him, then Sumo decides they should smash the eggs. Jeff agrees to do it, then he asks if Clarence is coming, but Clarence tells them to go ahead and play without him, so Jeff and Sumo goes into the house to play, and the episode ends with Clarence exclaiming the word "Yes!" 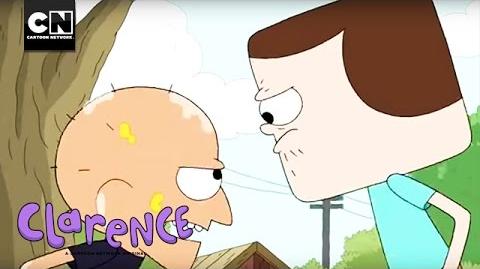 Jeff vs. Sumo I Clarence I Cartoon Network 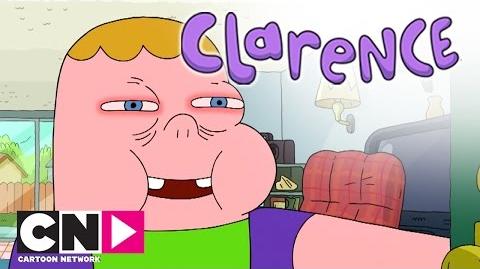 Clarence The Break Up Cartoon Network 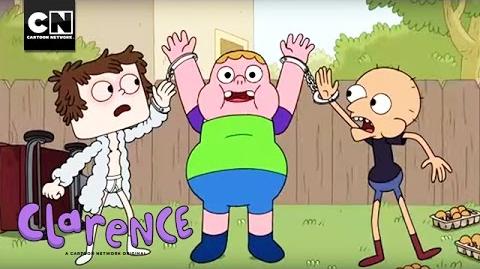 Getting Friends Together I Clarence I Cartoon Network

Retrieved from "https://clarence.fandom.com/wiki/The_Break_Up?oldid=92967"
Community content is available under CC-BY-SA unless otherwise noted.