Clarence: I think Jeff says there's gonna be pizza at the party.

Clarence: [Gasps] Look at the shoes. [Looks at people playing bowling] Look at all the lanes. [Gasps] [Looks at a slushy machine] They got one of those.

Jeff: There you guys are.

Jeff: I was worried you guys had got lost or --

Clarence: Oh, I made you this super special. It's just for you. It's a birthday hat. I-I made it myself. Just look at the -- look at the macaroni. I glued it on myself. 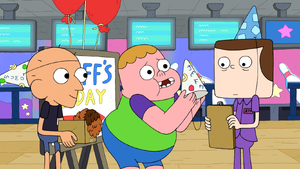 Jeff: Oh, uh, thanks, Clarence, but we've already got hats over here.

[Someone grabs a slice of pizza]

Jeff: But you can still wear your own hat if you want.

[Clarence tries to get a slice, but the pizza is over]

[Jeff and the kids sit around a table]

Jeff: Now it's time for presents.

[When Jeff is about done recieving his presents, Sumo gives his present to Jeff]

[Jeff looks at the present. It is a ball with a furry tail]

Jeff: Oh, thank you. [Puts the present into the box of things to sell, under the table] Now that we got our presents out of the way, let's get this bowl-a-rama going.

[The "shoes man" gives Kimby her bowling shoes, and Clarence is next]

Man: Okay, but what size is that?

Clarence: Oh, uh, [Shows his foot to the shoes man] it's about this big.

[Everyone now has bowling shoes]

Sumo: Oh, yeah. [Throws away his other shoes]

Jeff: Hey, everyone, gather 'round. Before we start, I thought we could go over a few rules. Let's see. Order will go, [Points to the children] boy, girl, boy, girl. Try to keep all your pins in your own lane. Oh, and I made this pie chart for you guys. The blue represents the -- 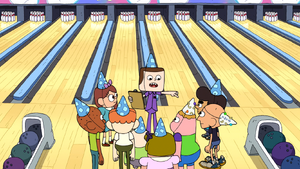 Percy: Um, I have a question. When we're gonna bowl? 'cause I thought this was a bowling party. [Farts]

Clarence: Oh! Um, Sumo said there was gonna be 100 pizzas.

Sumo: I didn't say that.

Clarence: And I only saw one pizza. So I was wondering when the rest of the 99 were coming out.

Jeff: Actually, Clarence, you showed up late, so we ate all the pizza. But we do have cake coming out later, so there's nothing to worry about. So, the standard bowling cycle provides two opportunities...

[Clarence looks up at one of the TV hanging from the ceiling, which mentions a free pizza to anyone who gets a perfect score in bowling]

Clarence: Sumo, wait! I know how we're gonna get that pizza. [Points to the TV]

[Clarence grabs a bowling ball and throws it]

Kimby: [Grunts] [The ball doesn't hit any pin] Come on!

[Sumo tries to throw another ball]

Sumo: Hyah! [His fingers get stuck in the bowling ball] Huh? [Groans]

[Marlie throws a bowling ball but it doesn't hit any pin]

[A bowling ball falls on Percy]

[Sumo tries to get his fingers out the bowling ball]

Breehn: The power of probability! [Throws a bunch of bowling ball, but none of them hit pins] That's it! 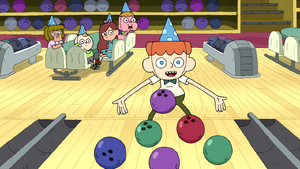 Breehn: Hey, Jeff, I-I know it's your birthday and everything, but what do you think about putting up some bumpers?

Jeff: Well, I guess that would make it easier. But we could also do it the real way.

[Jeff throws the ball but as everyone else, he doesn't knock any pin]

Clarence: I don't know how we're gonna get that pizza, Sumo. Look at Jeff out there. I just wish he'd knock down a pin or something.

TV: Winner, winner! We have a winner!

Clarence: Jeff! You did it, buddy! You did it! You really are a good bowler. I never doubted of you, Jeff.

Jeff: Thanks, guys, but did what?

Clarence: Did what? Just look on the TV.

[Clarence, Jeff and Sumo look on the TV, but the real winner was actually Gilben, then, the boys look at Gilben's party] 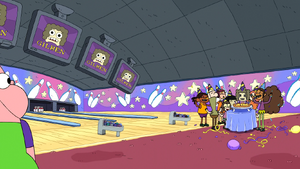 [Everyone in Jeff's party look at Gilben's party]

Jeff: Alright, people, I know that noise was loud, but let's get back to bowling. [Chuckles] Eyes on your own lane. Key to success.

Breehn: [Looking at Gilben's party] Whoa, he has bumpers. Is this gonna be a double birthday?

Jeff: Come on, guys. We know there's only one birthday, and it's mine.

[Camden shows up from Gilben's party]

Camden: He also wants to know if you would like our parties to form an alliance. A "double birthday", if you will.

Jeff: No, thanks. We kind of have our own thing going on.

Jeff: Sends his blessing. What does that even mean?

♪ Get in my mouth. ♪

[Scene cuts back to Jeff]

Jeff: Alright, guys, [Grabs a bowling ball] who's ready for another round of watch Jeff get a stri... [Finds out everyone went to Gilben's party] 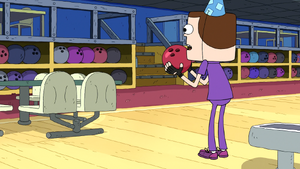 [Some kids are shown in Gilben's party]

Jeff: Uh, well [Chuckles] I guess it's just you and me.

[Clarence shows up in Jeff's party]

Clarence: Hey, birthday buddy. How come you're over here and not over at Gilben and your's double birthday? [Eats a slice of pizza]

Jeff: What the heck is a double birthday? Is that even a thing? Why is everyone saying that? [Sighs] Everyone saw you run over and eat that dumb pizza, and those dumb bumpers, and they all ran off. [Puts the bowling ball back to its place] Ran off to Gilben. That charming snake.

Clarence: Aw, it's not so bad. Come on, Jeff. [Takes Jeff to Gilben's party]

[Gilben controls his bowling ball to hit all the pins] 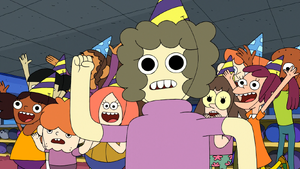 Percy: Uh... my uncle. He's the -- he made bumpers. He invented bumpers. You believe me, right? [Runs to Gilben's party]

Jeff: [Using the hat as a megaphone] Attention, everyone! Jeff's birthday guest, come back. There's no double birthday. There's two single birthdays. [Chuckles] Easy mistake, I know. So, if you can just --

[A woman arrives with the cake]

Woman: Hey, kids. We heard that you guys combined your birthday parties. That's so mature.

Woman: We decided to help make it official with this cake.

Woman: Oh, dear. I'll fix that for you right away.

[Later, the word "Companion" is shown crossed out with the name George next to it]

All: ♪ It's someone birthday. ♪

♪ Invite all the children... ♪

Jeff: [Thinking] Gilben. The golden boy. With that luscious hair. Pristine smile, good people skills. I swear if I hear his name one more time, I'll -- 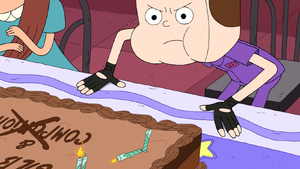 Jeff: Clarence, this is practically your fault! You started this whole Gilben craze! And now you won't even stand up for your best friend?

Jeff: I am not being a baby. You took over my whole party.

Jeff: [Gasps] That's it! [Jumps on Gilben] Aah! There can only be one birthday!

[Gilben punches Jeff in his face]

Jeff: You get that one for free.

Jeff: [Grunting] [Trying to punch Gilben] How are you dodging everything?

[Jeff takes Sumo's bowling ball, which was stuck in his hand]

Jeff: Give me that. 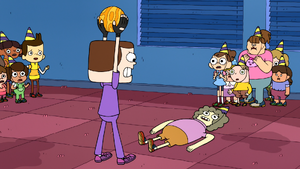 Jeff: [Stands up] No, thank you. [Breathing heavily] [Walks to Gilben] What am I doing, you ask? Something I should've done a long time ago. Aah! [Jeff throws the bowling ball and it hits all the pins]

[Clarece goes outside looking for Jeff]

Clarence: Jeff, don't become a super villain and destroy everything with a bowling ball and bowling-themed gadgets!

[Clarence runs up to Jeff, who is sit on the sidewalk]

Jeff: It's not your fault, Clarence. Although you did seem more excited to see pizza than me.

[Clarence sits on the sidewalk]

Clarence: I have a pizza problem.

Jeff: But I overreacted. Big time. I-I just wanted things to go exactly as planned, you know, for one day.

Clarence: I'm really sorry today didn't turn out perfect. You're pretty much the most perfect person I know. So, I'm gonna do whatever it takes to make the rest of your day even perfecter. [Takes off his birthday hat] But first, birthday boy needs a birthday hat. [Puts his birthday hat on Jeff's head]

Jeff: Thanks. [Looking at Sumo's gift when it moves around] By the way, this toy's actually kind of neat. It's like, I can't look away.

Sumo: Hey, what are you guys doing?

[Clarence, Jeff and Sumo go back inside] 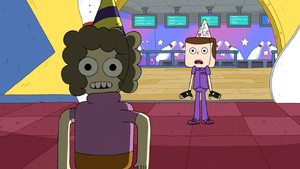 Jeff: Oh. Hey, Gilben. Uh, I just wanted to apologize for making a mess of things. And trying to beat you up, and I'll just leave you guys alone. Happy birthday.

[Gilben has a cake saying "Happy Birthday, Jeff" in his hands]

Jeff: Gee, thanks, Gilben, but where did you get another cake so quickly?

End
Retrieved from "https://clarence.fandom.com/wiki/The_Big_Petey_Pizza_Problem/Transcript?oldid=89296"
Community content is available under CC-BY-SA unless otherwise noted.