Jeff worries that his birthday party will be ruined when he learns that Gilben is having a party at the same place.

The episode begins with Clarence and Sumo arriving at Pete's Bowlarama for Jeff's birthday party. When they walk inside, they are amazed by all the bowling balls, bowling lanes, and slushy machines. Jeff is happy to see that the two arrived, and Clarence and Sumo wish him a happy birthday.

Clarence gives Jeff a special birthday hat he made himself, then Jeff tells him they've already got some. When he points to the hats, Clarence sees pizza and hopes to have some, but everyone else at the party quickly take all the slices, leaving Clarence disappointed. Jeff announces that it's time to bring out his birthday presents. Later, when Jeff is just about done receiving his presents, Sumo gives his present to Jeff, which is a ball with a furry tail. Jeff pretends to like it, but secretly puts it into the box of things to sell under the table, then Jeff announces that it's time to start bowling.

The children receive their special bowling shoes, but before they can start playing, Jeff has to tell them his rules for bowling, which bores everyone. Clarence asks when more pizza is coming, and Jeff explains that there was only one pizza, and everyone already ate it. While Jeff continues going over his boring rules, Clarence looks up at the TV hanging from the ceiling, which mentions a free pizza to anyone who gets a perfect score in bowling. Jeff finally finishes going over his rules, and Clarence tells Sumo that he found a way to get pizza.

The children finally start bowling. Clarence goes first and gets frustrated when the ball doesn't hit any pins. The other kids have a hard time hitting the pins too, and Sumo gets his fingers stuck in a bowling ball. After Breehn fails to hit the pins, he asks Jeff if he can put some bumpers on the bowling lane, Jeff declines because he wants to bowl the 'real way'. Jeff begins bowling, but the ball doesn't knock down any pins, making Clarence feel like they're never going to get that free pizza. Suddenly, a voice on the TV is heard yelling, "We have a winner!", and Clarence and Sumo mistakes Jeff for being the one who won, so they cheer for him, but it turns out that the real winner was actually Gilben, who is also having a birthday party. Jeff gets a little nervous and tries to get everyone to keep focusing on his party, not Gilben's. Breehn notices that Gilben's bowling lanes has bumpers, and wonders if they're going to do a double birthday party, but Jeff tries to convince him that there's only one party; his own. At that moment, Camden shows up from Gilben's party to wish Jeff a happy birthday, and to ask him if he wants to do a double-birthday, Jeff declines, so Camden leaves. After Clarence is shown eating a pizza. Jeff gets back to bowling, only to find out everyone went to Gilben's party.

Clarence walks up to Jeff to find out why he's not at Gilben's party, and Jeff complains to Clarence about how everyone ran over to Gilben's party just because they saw him eating the pizza, Clarence tells Jeff it's not so bad, so takes him to Gilben's party. There, everyone watches Gilben controlling his bowling ball to hit all the pins. Jeff gets mad because Gilben was using bumpers. The children cheer for Gilben, and throws him up in the air. Jeff, bothered by all the attention Gilben's getting, uses Sumo's birthday hat as a megaphone to try and get everyone to go back to his party, but he gets interrupted when a woman arrives with the cake, which spells "Happy Birthday Gilben! & Companion" on it. Jeff tells the woman that his name is Jeff, so the woman takes the cake back to fix it.

Later, the word "Companion" is shown crossed out with the name George next to it. Jeff is upset that they got his name wrong, then Camden announces that it's time to sing the birthday song. Jeff covers his eyes in frustration as everyone else sings, and he is heard talking to himself about how good Gilben has it. As the children continue singing, Jeff blows on the cake really hard, sending frosting and candles on Gilben's face. Camden gets upset that he ruined the cake, then Jeff starts whining about how it was supposed to be his cake. Clarence tries to get Jeff to calm down, but Jeff points his finger at him saying that it's his fault, then Gilben tells Jeff that he's being a baby, (in his spooky wind voice, of course). Jeff tells him he's not being a baby, then Gilben says something rude to Jeff, which makes him so angry that he jumps on Gilben and starts fighting him, Gilben fights back and dodges all of Jeff's hits,

so Jeff takes the bowling ball that was stuck to Sumo's hand and gets ready to throw it at Gilben, but instead, he ends up throwing the ball toward the bowling lane and hits all the pins, Jeff is still angry, though, and he goes outside. Clarence goes outside to look for Jeff. Jeff lets him know he's sitting on the sidewalk, and Clarence runs up to him to apologize. Jeff says it's not his fault, even though he did seem to care more about pizza than his party. Jeff admits he overreacted, and Clarence gives him the birthday hat he made for him earlier. Jeff thanks Clarence, then he points out that the toy Sumo gave him is pretty neat, and Clarence and Jeff has a hard time taking their eyes off the toy going around in circles, until Sumo appears and asks them what they're doing. Soon, the three goes back inside Pete's Bowlarama, and Jeff apologizes to Gilben for trying to hurt him, then he wishes Gilben a happy birthday, and begins walking away, but at that moment, Camden tells Jeff to come back, and Gilben surprises Jeff with a new cake that says "Happy Birthday Jeffrey!" on it. Jeff thanks Gilben, then he asks him how he got another cake so quickly, and Gilben is heard making his spooky wind sound again, and everyone laughs at his joke, ending the episode.

The gallery for The Big Petey Pizza Problem can be found here.

The transcript for The Big Petey Pizza Problem can be found here. 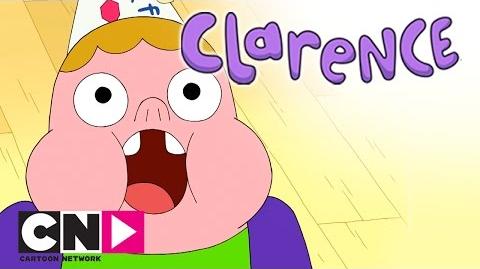 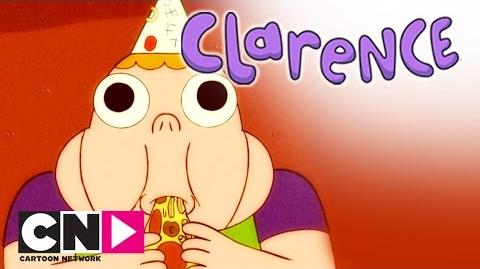 Retrieved from "https://clarence.fandom.com/wiki/The_Big_Petey_Pizza_Problem?oldid=92375"
Community content is available under CC-BY-SA unless otherwise noted.