Clarence throws a big talent show in his yard to showcase all the fun hidden talents of his friends.

Clarence sets the stage for the talent show and many children come. Clarence makes all of them cut some hair. The first show is by Kimby, Malessica and Courtlin, dancing and singing the song "Love Accessory". Meanwhile, Mary takes off her bun and sits on the side of the stage drinking something.

The next one is Gilben, who really does not do anything, but it seems like everyone like it. Then it continues with Belson, who only plays video games, without even allowing others to see him. Meanwhile, Brady, sitting on the lawn away from the others, wonders what his talent may be. Clarence asks Chad to act as "Chozo the Clown" as a distraction while he tries to cheer on Brady.

Next up is Percy, who sits in a chair next to a pear-headed doll, the kids laugh because they thinks it's nonsense, making Percy cry. While Clarence tries to find Brady's talent, Sumo makes a game with his dogs and Vu dances a song, Chelsea bursts a watermelon with a hammer and Camden shows his dolls made of the kids hair, which are a representation of all the children that are there. This last presentation receives a lot of support from the children.

While Clarence is still with Brady, Mavis plays limbo with a game she has. At that point Clarence asks Mary to go on stage and talk about each boy, as another method of distracting the kids to keep working with Brady. Clarence gets in his house and finds Brady hiding in the closet practicing a song about how much he loves his mother, so he tells him to wear a dress for his show. Finally, when Mary talks about Percy, she makes him cry and the kids boo.

Brady takes the stage and the song begins, but he realizes that he forgot his "special suit"; Brady breaks the glasses he uses for the song and takes off his clothes to put on the suit, but everyone see him and Brady covers himself with Percy's doll. Sumo's dogs chase after Brady and he dodges them for a while. That ends Brady's show and the whole talent show itself, Clarence says there's a very obvious winner, and Brady is deluded, but Clarence mentions that Camden is the most talented for his hair works. Clarence gives him as a prize a mysterious box with stickers, finally the children are seen celebrating, while Brady is depressed. 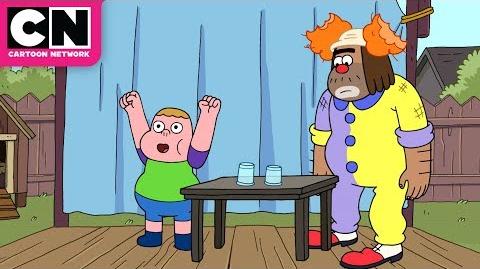 Retrieved from "https://clarence.fandom.com/wiki/Talent_Show?oldid=89764"
Community content is available under CC-BY-SA unless otherwise noted.