Suspended is the 30th episode in Season 1 and the thirtieth episode of Clarence overall.[1]

Clarence and Sumo hit the jackpot when they get suspended for a week, learning all sorts of different facts they’d never learn in class, but after a few days the suspension takes its toll, boredom sets in and the boys want to go back.[2]

The episode begins with Ms. Baker teaching the class about the theory of Euclid. Sumo asks Jeff for a wrench, and he lets him borrow it, but when he finds out Clarence and Sumo are going to use it to play a prank on Ms. Baker, he tries to get it back but fails. Clarence unscrews Ms. Baker's chair, and when she sits down, the screw goes flying across the school, breaking a lot of things, including Ms. Baker's eyeglasses and mug.

A few moments later, Ms. Baker scolds Clarence and Sumo in the hallway, then Mr. Reese suspends Clarence and Sumo from school for a week. Clarence doesn't understand how having a week without school is a punishment and thinks more school would be a better punishment, but Sumo doesn't want Mr. Reese to get any ideas, so he pretends they're both sad and they leave the school.

Not having to be in school, Clarence and Sumo play on the playground while the other kids are in class, but the two get bored after a while, then Clarence realizes that they can do whatever they want anywhere in the world, not just on the playground. As the two go walking through the neighborhood,

they find some concrete, which they think is cement until a woman explains to them that it's actually concrete, then she shows them how to make a face print. As Clarence and Sumo are washing the concrete off, they talk about how cool that woman was, and how one can learn so much when not at school. Later, Clarence and Sumo go around town having fun learning all kinds of things they never knew.

At school, Jeff starts reading the test but has difficulty understanding the question, so he goes with his trusty old "C" answer. Meanwhile, Clarence and Sumo think they learned too much stuff, and they start missing school. Back at school, Clarence taps on the window and asks Ms. Baker if they can come back to class, but Ms. Baker doesn't allow it and closes the window on them.

, Suddenly, the fire alarm sounds, which makes the class nervous. Ms. Shoop arrives and tells Ms. Baker that it's the boiler room again. Ms. Baker gets scared and tells the class not to panic. After Ms. Baker leaves to help out, everyone runs out of the classroom in panic, except for Jeff, who wants to finish the test. Clarence and Sumo see everyone running out of the school.

The teachers go down into the boiler room, there, everything is a disaster. In the classroom, Jeff is relieved to have finished the test, but suddenly, the floor began to break due to the pressure in the boiler room and he gets scared. In the boiler room, a man falls into the fire, and one of the professors tries to remove the coal, but he does not succeed. At that moment, Clarence and Sumo arrive. Clarence and Sumo explain what they must do, but the only way to do the idea is by going through a tiny door, which Clarence can fit in. The adults throw Clarence into the small room, and when Clarence gets there, he has to remove the screw from one of the tubes. Each tube has a letter on it, "A", "B", "C" and "D". Clarence doesn't know which one to choose.

At that moment, Jeff arrives and tells him to always pick " C". Clarence listens to him and removes the screw from the tube with the letter "C" on it, returning the boiler room to normal. Everyone rejoices and Ms. Baker allows Clarence and Sumo to return to class. The next day, in class, Clarence and Sumo present a video about being suspended and the episode ends. 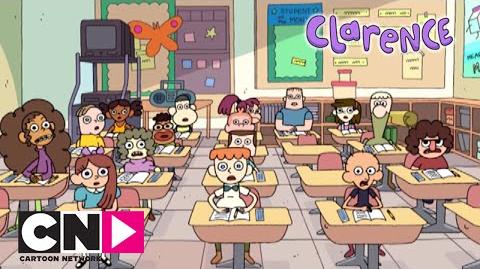 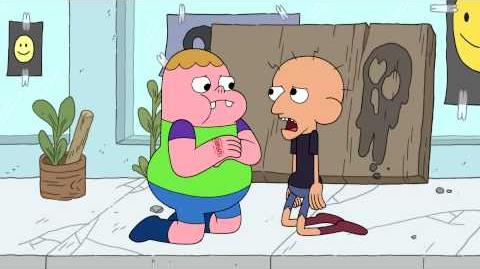 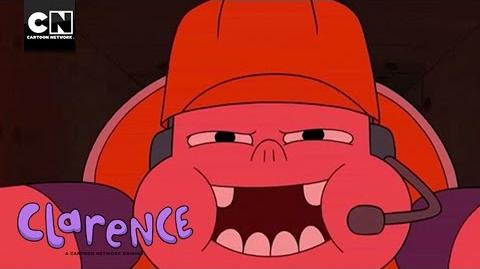 Retrieved from "https://clarence.fandom.com/wiki/Suspended?oldid=92419"
Community content is available under CC-BY-SA unless otherwise noted.