Spooky Boo is the 51st episode of season 1 of Clarence, and the season finale of season 1.[1]

After Clarence leads a few neighborhood kids through his homemade haunted house, Chelsea suggests they go to the high school kids haunted house for some real scares. When the gang makes a wrong turn they find themselves in a mysterious house on a hill full of creepy sounds, ghoulish shadows and a mutant rat man![2]

Episode begins with Clarence showing Chelsea and Mavis around his homemade haunted house in the garage, but Chelsea and Mavis do not find it scary. Chelsea suggests they all go trick-or-treating, and this gives Clarence a flashback to a another Halloween, where he asked Gale if he can use her bathroom, only to get spooked by a ghost decoration in there, and runs down the street farting. Clarence tells Chelsea that he's too old to go trick-or-treating, but only because he's too scared to do it. At that moment, Chelsea's older brother, Glary drives by in his car to give Chelsea an orange shirt, and to tell her that he's going to a high school Halloween party that she's not allowed at. This makes Chelsea mad, so she tells Mavis that they're going to Glary's party, and Clarence, Jeff and Sumo decides to tag along.

As the five are walking to Glary's haunted house, Sumo notices an old house on a hill, and Chelsea and Sumo start guessing what kind of spooky things are in there. Chelsea thinks there's a big cloud of spirits, and Sumo thinks there's a rat man. Jeff, on the other hand, tries to think more realistically; he says that there's a cult group that grow their own vegetables, but Jeff is the only one who thinks that's scary. Clarence says that everyone's being big babies because he's not scared of those things, but as he's saying so, Chelsea, Sumo, Jeff, and Mavis walks away toward Glary's haunted house. When the five of them arrive, Clarence doesn't even find it scary, but he does ruin the party a little bit, and when Glary is flirting with a girl, Chelsea throws the orange shirt at him, causing him to fall and knock over everything. Glary gets so angry that he threatens to tell his mother, but that only makes the girl he was talking to think he's uncool, so Glary and his friends chases Chelsea and the others out of the haunted house. Chelsea and the others soon lose them because they stopped to talk with some girls, but they also lost Mavis, who stopped when she came face-to-face with a fire hydrant. Mavis got so scared of the fire hydrant that she ran extremely fast into the old house on the hill, and Clarence decides they have to go inside the house to get her. Jeff doesn't want to at first, but when he sees home-grown vegetables on the ground, he follows the others in fear.

When they go inside the old house, Clarence sees a cake slice on the stairs, which Jeff believes is a trap. Mavis' cry is heard from somewhere in the house, and Chelsea, Sumo and Jeff has a hard time figuring out where her cry came from, so Clarence decides they should all split up in different directions. Clarence tells everyone where to go, and he goes upstairs. As Clarence looks for Mavis, he sees a white sheet go by, and wonders if it's Mavis. As Sumo and Chelsea looks for Mavis on another part of the house, Sumo calls for the ratman, then the two start arguing about whether there's a ratman or baby spirits. In another part of the house, Jeff calls Mavis all by his lonesome, and he soon finds Mavis in a room listening to music. When he tries to turn off the music, Mavis pushes him away, and Jeff notices pictures of the "cult people" on the wall and gets scared, then he sees Mavis put a ladle in her mouth to drink some punch she found, and Jeff tries to remove the ladle from her mouth because it could've been made by the "cult people".

Meanwhile, Clarence had just finished eating another slice of cake he found, then he sees that white sheet go by again, and he decides to follow it. As Clarence is doing so, he starts hearing weird sound effects, then he finds a pumpkin in a wheelchair, which he believes is Mavis who has been turned into one by a witch. Clarence then turns around and sees that the white sheet has creeped up on him. In a different room, Sumo continues looking for ratman. Suddenly, Sumo and Chelsea hears something rattling in a cabinet and they hug each other in fear. In the hall, the white sheet chases Clarence while he pushes the wheel chair with the pumpkin in it. Soon, the pumpkin rolls out of the wheelchair, and the white sheet chases Clarence into a dining room that a lot of people are entering. Clarence gets really scared and starts yelling that he's the scarer, then he jumps on the ghost and punches it multiple times. At that moment, a nurse turns on the lights to see what's going on, then it's revealed that the house is a home for old folks, and that the ghost was just an old man in a white sheet. The old man reveals that he was the one making those weird sound effects because he used to be a sound effects guy in the 1960's. Clarence starts having fun with the guy and makes sounds with him, and soon, Sumo and the others enter the room, and Chelsea says that there was no ratman after all. However, the nurse says that ratman is real, and the episode ends with a furry hand coming out a cabinet and grabbing a rat. 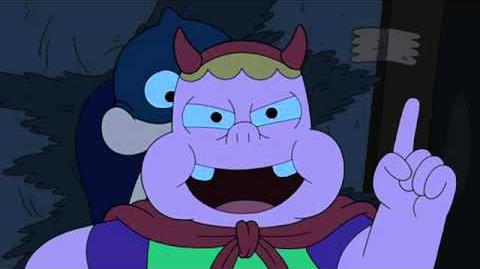 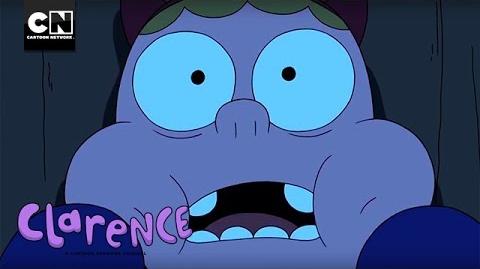 Retrieved from "https://clarence.fandom.com/wiki/Spooky_Boo?oldid=91065"
Community content is available under CC-BY-SA unless otherwise noted.