Sneaky Peeky is the 17th episode of season 2, the 68th episode overall of Clarence.[1]

The trio plans to sneak into a movie theater in order to catch a glimpse of the new Robofrog trailer.

Episode begins with Kellen Kellerman interviewing people before Robofrog trailer, Jeff was about to tell his excitement about the trailer, but Clarence interrupts him to tell he's excited about "Tom Blarps 3", Kellen Kellerman is about to leave, but Clarence looks at the camera and greets Belson. Belson was watching him on TV, then he turns off TV. Kellen Kellerman leaves. Dale arrives to announce that tickets for Tom Blarps 3 are sold out, however, who manages to answer three questions about Robofrog takes 3 tickets. Robofrog Fans answer all the question and Clarence, Sumo and Jeff are left without seeing the trailer, then Jeff gets too depressed.

Sumo decides to get into the cinema to steal the Robofrog 2 trailer. They are seen in the work room, Jeff thinks Sumo is not gonna find the trailer, however he does. Clarence is drawing a heart in a Tom Blarps poster, the man who works in the cinema gets in the room and the kids leave. Jeff believes he must bring the tape back to the cinema, however, the kids want to see the trailer, so they go to Jeff's house to watch it in the basement, everything seems to be working good, until the camera burns and the trailer is ruined, Jeff gets depressed and goes to the living room to see Robofrog.

At that time, Clarence and Sumo come up with their own trailer. Later, Clarence asks Jeff about how is Robofrog dressed, Jeff goes down to see what happens, and he explains how the trailer should be, then they start filming. After finishing the trailer, they go to the cinema, there all the viewers are angry because they can not see the trailer. Then Clarence, Sumo and Jeff give their own trailer to the man in the work room, so he puts it in the camera and everybody watch the trailer. When the trailer finishes, everyone gets up from their seats and leave, because nobody liked it.

While people leave, Kellen Kellerman interviews some people to ask them about the trailer, Jeff doesn't want to tell that he made the trailer, so he says that it was a "bunch of guys doing the best they could", while Sumo believes that the film will be better than "Tom Blarps 3", Clarence is with the movie manager, watching "Tom Blarps 3", both laugh while seeing the "Who did it?" scene, then the episode ends. 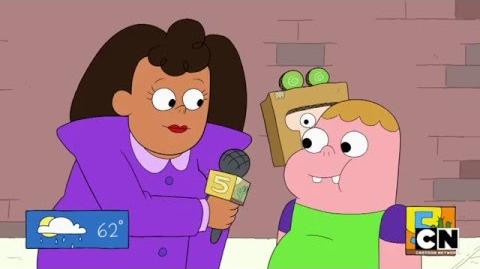 Clarence - Sneaky Peeky (Preview)-0
Add a photo to this gallery

Retrieved from "https://clarence.fandom.com/wiki/Sneaky_Peeky?oldid=91268"
Community content is available under CC-BY-SA unless otherwise noted.