Skater Sumo is the 19th episode of season 2, the 70th episode overall of Clarence.[1]

Sumo tries to build a skateboard and join Chelsea and Rita's skating team.

The episode begins with Clarence and Sumo chasing some ants, Clarence goes to look for a watermelon to feed them, meanwhile, Chelsea and Rita arrive, they explain to Sumo that they will go skating, when Clarence returns, accidentally throws the watermelon towards the anthill, making them bite him and Sumo. Sumo pretends that it doesn't bother him and the girls leave.

Afterwards, Clarence and Sumo are getting wet to get rid of the ants, Clarence tells Sumo that he has some skateboards in his garage, but they turn out to be rollers. Then a sequence is shown in which Clarence and Sumo build their skateboards and practice skating. Later, both meet Chelsea and Rita at Rough Riders, Chelsea, after seeing Clarence, asks him if he will skate with a roller, then, when they leave, Sumo gives Clarence a talk on how he can be boring sometimes, and remembers him some things that happened to him. After this, Clarence goes home dissapointed. Sumo then follows Chelsea and Rita and gets frightened to see they will be skating in the pool at Belson's house. Meanwhile, Clarence is at home disappointed not to be extreme, at that moment, he prepares to go skating, even though Sumo does not believe him capable.

Sumo does a simple trick on his skateboard, the girls think it's cool, but Sumo thinks it's not cool and explains that he didn't invite Clarence believing they were going to be extreme. At that moment, Clarence gets there, and wants to skate in the pool, but the wheels come off his roller and start spinning in the pool, when they stop, both are impressed and spend a while having fun in the pool, then the four take a break to eat Rough Riders chicken. Then Belson comes out complaining about his pool, Clarence tries to throw his chicken at him but all of them fall on the wall, and the episode ends with Belson playing a skating game on his console.

The episode was received 1.36, it once was the highest rated episode of season 2 when it superseded "The Interrogation" (ranked 1.35), until it became 2nd highest when "Jeff's Secret", was ranked the highest with a 1.38 rating.

The gallery for Skater Sumo can be found here.

The transcript for Skater Sumo can be found here. 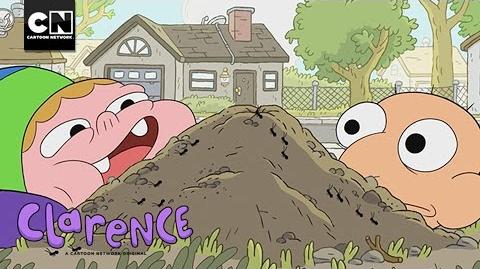 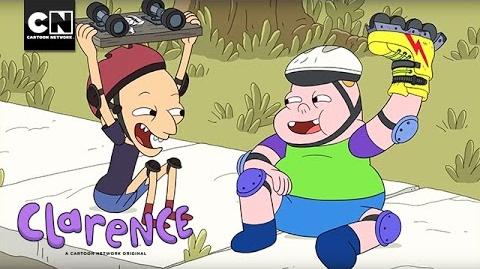 Skateboards Clarence Cartoon Network
Add a photo to this gallery

Retrieved from "https://clarence.fandom.com/wiki/Skater_Sumo?oldid=89502"
Community content is available under CC-BY-SA unless otherwise noted.