Rough Riders Elementary is the twenty-sixth episode in Season 1 of Clarence.

Clarence’s school gets a corporate sponsorship, but when it feels like a takeover, Clarence wants to stand up to "the man".[1]

On Monday, Clarence is eating his Rough Riders Chicken at lunchtime. He tries the new Rough Riders sauce, but he finds it gross. When Jeff and Sumo try the sauce, they find it delicious. In class, Clarence is presenting his report, but Ms. Baker tells him he's out of time because she needs to go to a meeting. Clarence then pretends that he needs to go to the bathroom so he can sneak into the meeting. When he peeks into the meeting, the Rough Riders employees played a video about that the school district has decided to go into business with Rough Riders Chicken, much to Clarence's excitement.

Later that week, on Tuesday, Clarence tells Jeff and Sumo all about what Rough Riders is going to do with the school; most importantly, serve Rough Riders Chicken in the cafeteria and fix up the library. Jeff states that he has a bad feeling about the entire plan, but he decided to ignore it.

Thursday, Aberdale Elementary is changed into Rough Riders Elementary. Everyone is hypnotized excluding Clarence. When Clarence asks Jeff why the plan is starting to feel like a takeover, Jeff replies in a hypnotized voice: "Nonsense, Clarence. You are starting to sound like you do not believe in 'Team Rough Riders'."

Friday, the cafeteria had become a Rough Riders Restaurant. Clarence came in finding out that random people had been hypnotized too. He goes into the hallway also finding people hypnotized, sauce everywhere, and posters. He then foreshadows, revealing that the sauce must have hypnotized everyone, so he tries to stop Joshua.

In the room, Joshua gives Sumo a chalice filled with sauce, until Clarence came in the room. He rides on a little platform with wheels and launches himself hitting Joshua, spilling the chalice, hitting Sumo, and knocking the candles over making a fire. Joshua falls into the fire, causing him to turn into a half-human, half chicken. Sumo and Clarence bust out of the room, and Clarence's heroes, Nature Kate, Keith Mack, Rake Backburn, and Don Delano came and blew up Rough Riders Elementary.

At the class, Clarence explains to the class why Rough Rider's chicken is his favorite food and the students cheer, revealing that the entire plot of the episode was actually Clarence's report. 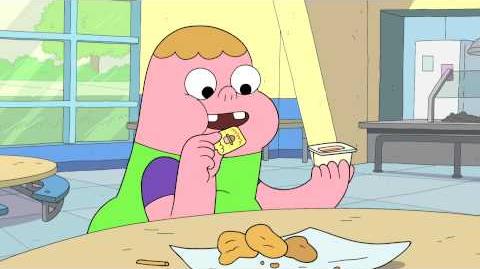 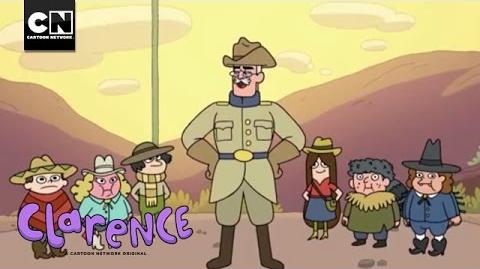 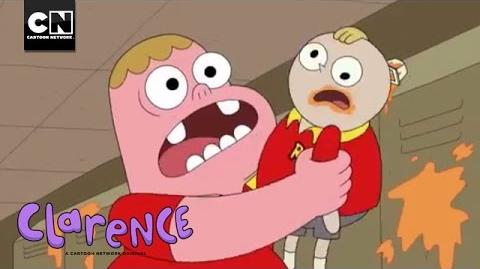 It's the Sauce! I Clarence I Cartoon Network

Retrieved from "https://clarence.fandom.com/wiki/Rough_Riders_Elementary?oldid=92528"
Community content is available under CC-BY-SA unless otherwise noted.