Rise 'n' Shine[1] is the twelfth episode in Season 1 of Clarence.

A glimpse at the wild, secret adventures Clarence undertakes each day before the rest of us, and the sun, get up.[2]

The episode begins with an overview of Clarence giving tips for a great morning, then it cuts to Clarence, in his pajamas, staring at the clock waiting for it to turn to 5:00 a.m.

Once the clock did he began his morning routine. It began with him in his underwear watching a commercial for excercising and pretends that he is excercising, then showering in the dishwasher by opening it up and getting engulfed in it's steam. Afterward he cleans the kitchen then makes an attempt to scramble some eggs which results in him messing up the kitchen. Later, he plays with his toys, tries to travel back in time with a cardboard box, has breakfast, eats some whipped cream, measures himself, and then motivates Mary and Chad in their sleep. He then proceeds to go outside and gather trash for his raccoon friends, which eat the food and then scare him off.

He then enters the front yard where he sees the garbage truck doing it's weekly routine which leads him to try to start a conversation with the sanitation officer, Lucine, who tries to warn him to stay away from the truck because it is a dangerous piece of machinery. Clarence, not really minding the truck, continues to try to make a conversation with Lucine, which forces Lucine to ask her co-worker, Gary to show him his hand that is missing a finger and tells Clarence that he was maimed in the line of garbage duty. Clarence then proceeds to tell lucine a story about how he had to do garbage duty once,

but Lucine sends him home and drives off. Later we see Clarence sitting on his front porch playing with one of his chickens when his friend Randy passes buy delivering news papers. Clarence asks if he could deliver some papers, which Randy says he will let him if he gave him a candy bar, so Clarence gives him a granola bar instead and delivers a few papers before getting winded and collapsing on the side walk.

A few moments later, Clarence is woken up by the sound of a police siren and then runs towards the passing police car to ask them if there is a manhunt going on. The policeman informs him that a mountain lion is loose in the city and that he should go home for safety. Clarence then goes into his backyard to feed the raccoons again and finds the mountain lion in his backyard, scaring the raccoons up a tree. Clarence gets frightened and runs through the streets screaming until he reaches the police and sheriff, where they all begin to run towards Clarences's and gain the attention of Randy and Lucine.

It then cuts to the outside of Clarence's backyard where fire fighters are trying to get the mountain lion. The sheriff tells Clarence that he's sorry that he has to tranquilize the mountain lion and Clarence says that he sorry for what he's about to do and then Clarence subsequently tells the mountain lion to run and it runs up a tree along with the raccoons. Then the branch that the animals we standing on snaps landing on a live power line.

Clarence then grabs the policeman's speaker and begins to try to talk to the mountain lion, which proves to be futile so the sheriff shoots the mountain lion and raccoons with tranquilizer darts and the firefighters catch them all.

As the creatures are being taken away, Clarence says goodbye to the raccoons and proceeds to pet one of them, which the sheriff quickly alerts him that the raccoons could have rabies. It then cuts to Clarence entering his bedroom and collapsing on his bed while the clock strikes 6:59AM. Mary then passes by his room and says that he should get up because she is making egg salad which makes Clarence smile. 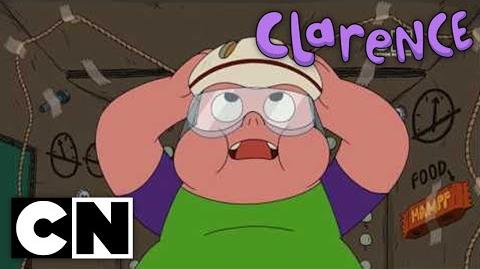 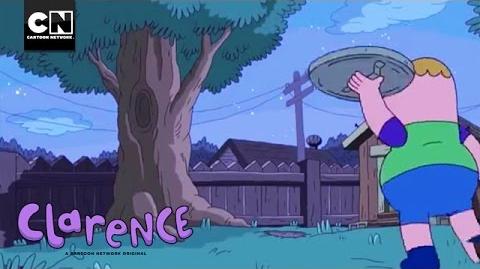 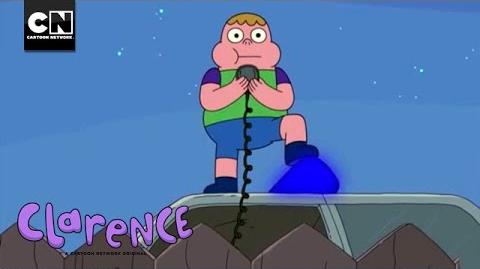 Retrieved from "https://clarence.fandom.com/wiki/Rise_%27n%27_Shine?oldid=92351"
Community content is available under CC-BY-SA unless otherwise noted.