Clarence spends a day outside with his toy RC Car, which he names Carla. Eventually convinced Carla has a mind of her own, he decides to follow her to new adventures. Will Clarence's car chase get in the way of Jeff and Sumo's plans for the day?

Clarence gets an RC car and names it "Carla," so he starts playing with it. First he knocks down some of his toys and then comes into the house to annoy Mary and Chad. Belson passes by his house and makes fun of him for not having a drone. Clarence feels a wind coming from his RC car and keeps playing with it, but the car enters thorny bushes and Clarence crawls under the bush to look for Carla. Clarence ends up in a natural area and finds some of his lost comic books.

Later, Sumo and Jeff are seen on the road; Sumo paints the road with chalk and Jeff reads his schedule to see what the next plan is. Clarence arrives with his car and gets them out for a drive, forcing Jeff to cross out one of his plans. The guys arrive at a deserted area to play with the car and get into a pipe. Then they get into an open house to play with the car and interrupt a customer interested in the house.

Clarence, Jeff and Sumo arrive at an area similar to a scene in the intro where there is a sign with some letters next to what looks like a hotel. Jeff calls one of his friends to cancel his plan with them. Clarence leads them to a well and pulls out a can, pissing Jeff off for everything they make him do. After causing a disaster at a pet store, the guys go to Rough Riders Chicken, however, after Carla passes over a baby's arm, making him cry, and throwing food on the floor, they are thrown out of the place.

Jeff and Sumo get mad at Clarence for everything that happened to them. Jeff takes control of the car but Clarence scares him and the remote control falls and breaks down. Even though the control was broken, the RC car seems to move without the help of its remote control. Both follow Carla through the city and find themselves with a steep downhill road. Rita shows up and lends Clarence her helmet so they can get off the road. The descent gives great speed to Jeff and Clarence, who go down on a skateboard, even touching the hair of an old woman who helped Percy cross the road.

After that, on the corner that ends the descent, the ice-cream truck passes and Jeff and Clarence pass over, but the driver makes a sharp turn, causing the truck to fall. Some kids show up and get on the ice cream truck to steal some ice cream. Clarence and Jeff fall with their skateboard to the bottom of a freeway, where many garbage bags accumulate. Sumo takes a baseball bat and destroys the RC car because of everything it caused in the day. After it's broken, Belson is shown on a park saying "Finally!" because his drone started working, revealing that what was moving the car without a remote control was Belson's drone. The kids meet at Bendle Park with Mavis to have some ice cream and they bury Carla, ending the episode. 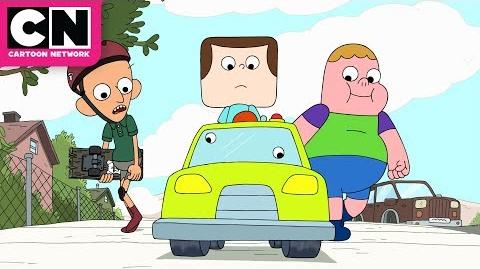 Retrieved from "https://clarence.fandom.com/wiki/RC_Car?oldid=90370"
Community content is available under CC-BY-SA unless otherwise noted.