The Pilot is a 7 minute clip of the Cartoon Network series Clarence. It was originally released on the Cartoon Network website on May 21, 2013, and it remained there until April 2014, when the series premiered. It aired on television after the Hall of Game Awards on February 17, 2014. This pilot was later re-released as Pilot Expansion, with an additional features such as an alternative ending.[1]

Clarence is a new kid in school who can't wait to make new friends. When he hosts a party at his house, only the wild Sumo and uptight Jeff show up, but Clarence shows them both how to have fun - the Clarence way.

The pilot begins with Mrs. Bernstein introducing the new kid, Clarence. Clarence tries to boost his popularity and make new friends by having a sleepover at his house. Clarence passes out hand made invitations to the entire class, including his teacher, Mrs. Bernstein. When Clarence arrives home, he finds dozen of pizza poppers made by his mom]and believes no one is coming to the sleepover. She has a party at a friends so she leaves Clarence alone and kisses him goodbye.

A short time passes by, and Clarence gets a phone call from Jeff. Jeff says he'll come to Clarence's house around 5:00 P.M. Then, Jeff comes over, and Clarence shows him all the things they can do. Jeff doesn't want to do anything, and instead decides to watch a trivia show while Clarence plays along. Just then, Sumo comes over, and asks Clarence if he can cut his hair. Clarence agrees to do this and cuts his hair in his tree fort. While on the tree fort, the basket falls down and breaks. Sumo looks at Jeff and asks Clarence why Jeff isn't playing. Sumo and Clarence then ultimately decide to show Jeff how to have fun.

They do this by dressing up in gothic clothes and makeup walking into the living room dancing to a boombox. Sadly, this doesn't work, since Jeff is a germophobe. Chad enters the room, drinks milk straight from the gallon and watches TV with Jeff. Clarence and Sumo decides to trick Jeff using a sudoku book and forces him into a prank call. Jeff then discovers that the call is to the police and tries to confess before Clarence and Sumo quickly takes the phone and deflect the police's attention. After that, a clock rings so for the mystery piñata. Jeff gets happy and said he wants to break Clarence's "mystery piñata", so Clarence and Sumo blind-folded him. Sumo then realizes what's in the piñata after Clarence dropped a number of hints. Sumo tries to stop Jeff who eventually breaks the piñata to reveal a swarm of bees. Sumo and Jeff start to freak out.

In the living room, Belson is peeping through the window and saying that is does actually look fun, but the police and fire fighters come bursting in and say that they are looking for the crook. Just to find Clarence, Jeff and Sumo running from Clarence's room with a swarm of bees chasing after them. But the bees attack the cop and the firefighter shoots water at the cops face hoping the bees will go away. Later, Clarence Jeff and Sumo are seen at the couch shirtless and with bee stings while eating ice cream, Clarence apologizes but Jeff and Sumo aren't mad. They talk while the episode ends.

Differences between the Pilot and The Series 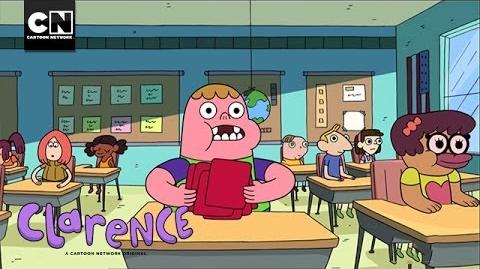 Retrieved from "https://clarence.fandom.com/wiki/Pilot?oldid=88668"
Community content is available under CC-BY-SA unless otherwise noted.