Amy (One time only), Clarence (in Pretty Great Day with a Girl)

Percy Dahmer is a supporting character in Clarence, he first appeared in "Fun Dungeon Face Off".

Percy has a round head and a round body as well, with stub-like hands that will grow fingers on certain occasions. He has small yellow hair on his head and round black eyes. He wears a light green, long-sleeved shirt, gray shorts, and white shoes. He looks much shorter than his classmates, except for Emilio and Brady, who are the shortest in the class.

Percy shows himself to be an insecure boy. He's not very bold and he's shown to be very sensitive as shown in "Honk" where he ends up crying when trying to tell Clarence how his horn gimmick was getting out of hand. Despite this, he is eager to do exciting things but he unfortunately also seems to be a jinx as he constantly suffers from bad luck. The numerous examples include when he tripped over himself and fell flat in the dirt when trying to throw a pine cone, clumsily spilled his juice in "Dinner Party", got attacked by a spider in Breehn's basement later in the episode, and fell down a flight of stairs when he was surprised by Clarence's horn. Also in "Money Broom Wizard", when he's playing laser tag with Belson and his friends, he keeps getting blasted while lying on the floor, despite saying he was already eliminated. When Percy was playing with a yo-yo, Clarence, running, gets the yo-yo stuck to his leg, and gets dragged across the floor, then falls in a trash can, but luckily Jeff helped him. Which could also show that he often gets taken advantage of. Also in "Average Jeff" when he was going back to class from the bathroom, he walked backwards and tripped into a toilet.

Despite hanging out with Belson sometimes, he does get along well with Clarence, Jeff and Sumo as seen "Dinner Party". He's also been shown to be kind in nature but is dimwitted and naive at the same time. This is best seen in "Zoo" where he gives Breehn a sandwich because he apparently lost his. However, it was a peanut butter sandwich  and despite being aware of Breehn's allergies, he gave it to him anyway because he didn't occur to him that peanut butter was made from peanuts. As Percy said "I didn't know he couldn't have peanut butter!" 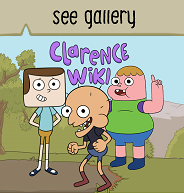 The gallery for Percy Dahmer can be found here.