Patients is the twenty fifth episode in Season 1 of Clarence.[1]

To combat the boredom of a waiting room, Clarence invents a game with prize candy from the reception desk.

The episode begins with Clarence and Mary entering the waiting room of the hospital. Both go to the reception desk. While Mary talks about her arm checkup to the nurse, Clarence sees a jar full of candy which he imagines is talking to him. He tells Mary that the candy needs him, and Mary decides to let him have one piece of candy when they leave, if he behaves. Clarence is sad that he has to wait, and the two sit down on the chairs. Then a girl named Tinia goes to the reception desk and asks for a piece of candy, which Nurse Tacker gives to her. Clarence sees that Tinia got to have some candy, and that made him want some even more. Clarence tries many things to get Mary to give him candy, but nothing works. Mary tells Clarence that he needs to entertain himself while he waits, so he starts trying to find fun things to do in the waiting room, such as drawing an organ chart on his stomach, watching a woman scroll through pictures on her cellphone, acting like animals, and playing with baby toys, which Clarence isn't very amused by.

When he imagines the candy jar talking to him again, he attempts sneaking under the reception desk to get some candy, and at that moment, Mary catches him and tries to put him back in the chair. While sitting in the chair, Clarence is bored, so he starts singing a song, but Mary tells him to be quiet, then Clarence starts making his chair jump, but Mary tells him not to move either. Clarence wonders what he can do while being quiet and not moving, then he starts using his imagination to change the waiting room into several different places, and that's when he comes up with the idea to imagine he's in a candy world. In the candy world, he meets talking ice cream, a talking bicycle horn, and his viking grandmother, and they all melt to pass the time. Clarence enjoys being melted so much, that he's completely unaware of what's happening in the real world, until Tinia throws peanuts at him, bringing him back to reality. Clarence is angry, then Nurse Tacker calls Mary, so Clarence is left alone.

Tinia continues showing off to Clarence that she has candy, and she decides to give him some of her's. Clarence gets excited, but then, Tinia changes her mind because she doesn't want to run out of candy when she's still in the waiting room, so Clarence decides to get everyone else in the waiting room to leave, but first, he goes back to his imaginary "Candy Brain" to ask his friends there if he should do it. The ice cream and the bicycle horn says "no", but Clarence agrees to do it because of the grandmother's viking horn. When Clarence returns to reality, he tries to get several people in the waiting room to leave, but he only got one guy to leave. Clarence asks Tinia for candy, but she wants him to do more favors first, such as reading her a story about a princess, followed by singing the story twice, braiding her hair, which she undos instantly, and giving her a piggyback ride.

When Clarence finally finishes all the favors, Tinia reaches up for the candy jar, and gives Clarence a chocolate bar. Clarence is happy, then Tinia apologizes to him for doing the things she do. Clarence doesn't know what she's talking about, then suddenly, Tinia lies to Sarah, her mother that Clarence stole her candy, which is the candy bar she just gave to him. Sarah gets angry with Clarence and threatens him that it'll be a long time before he ever tastes candy again. Nurse Tacker takes the candy jar off the reception counter, but Clarence takes the jar from her. Nurse Tacker tells him to hand over the candy, which starts a game of tug-of-war with the jar between her and Clarence. Nurse Tacker accidently throws the jar and it breaks, spilling candy all over the floor, at that moment, Mary starts leaving the hospital because the doctors can't see her in time before she has to go to work. As Mary is leaving, Clarence takes some candy off the floor. In the car, Mary continues complaining about the doctors, and she apologizes to Clarence for waiting for nothing, but Clarence is happy because he has candy, then he starts talking to his friends in his "Candy Brain", ending the episode. 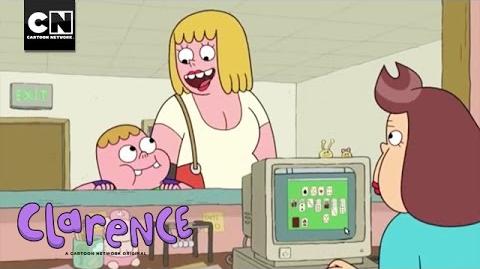 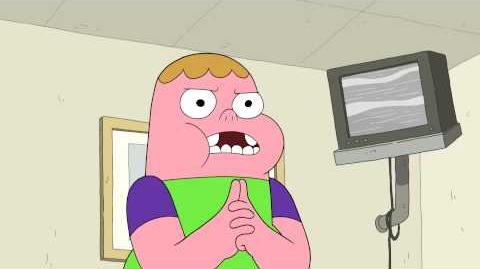 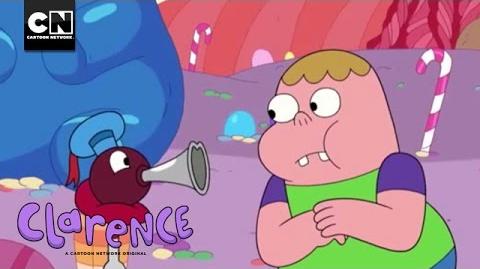 Retrieved from "https://clarence.fandom.com/wiki/Patients?oldid=92361"
Community content is available under CC-BY-SA unless otherwise noted.