Nothing Ventured is the twenty-seventh episode in Season 1 of Clarence.

Clarence and Sumo try to gather money to invest in Chad and Sumo’s father’s business venture: a boutique sculpture shop.

The episode begins with Clarence and Sumo trying to catch bottle caps that Chad and Mel Sumouski were throwing. Mel is shown talking to Chad about how he saw a $2,000 painting in Belson's mom's house, he says rich people will pay anything for art, then he starts building a sculpture out of tools and a bottle and says he could sell it for a million bucks. Chad thinks they should try making a sculpture shop. Mel is unsure at first, but after Chad tells him about his homemade Chad products, Mel thinks they should try running a business after all. Mel tells Clarence and Sumo to earn some cash for their business. At Clarence's house, Clarence shows Sumo the plans for earning money. The "plan A", was to make money, and if it fails, "plan B" was to make a better plan, and if plan B fails, "plan C" was to give up. Sumo suggests selling the laser pointer that Clarence is holding, but Clarence says it belongs to Jeff, and nobody will want it.

Later, Clarence and Sumo goes to Jeff's house, and they attempt to sell Jeff's laser pointer to him. Jeff asks them how did they get his laser pointer, and they run off. Meanwhile, Chad and Mel are gathering ideas for their business. Mel suggests having a door made of fire, called a fire door. Chad questions him about how will people get through the door, then Mel realizes his idea is terrible and gets angry with himself, so Chad pretends that he liked the idea. Later, Clarence and Sumo go back to Jeff's house to ask for $20, but he closes the door on them, so they give up. That night, Clarence is in bed thinking that he's not cut out to be a businessman, so he decides to go to sleep to the crickets, which gives him an idea, so he goes to Sumo's house.

Clarence wakes Sumo up, and they go outside in a field of grass. Sumo doesn't know what's going on, and Clarence tells him that plan C stands for crickets. Sumo still doesn't get it and wants to go back to sleep, but Clarence makes him come along on the hunt for crickets. In the garage of Clarence's house, Mel had just finished the sign for their store, showing that he decided to call it "The Dump". Chad tells him that people could confuse the store with the actual garbage dump. Mel realizes the name is terrible and gets angry with himself again. After he flips the table, Mel sees a guitar and asks Chad if he plays it. Chad tells him that he used to be in a band. This gives Mel the idea that they could play a song in their store, so they think about practicing.

Meanwhile, Clarence and Sumo tries to figure out where to find crickets, then Clarence sees a sign with the letter C on Marianio's restaurant, so they go inside. The restaurant is filled with cockroaches, but Clarence and Sumo confuse them with crickets and collect jars full of them. In Clarence's garage, Chad asks Mel which song he wants to play, he suggests some songs, but Mel tells him to play anything, and the two start practicing. Mel is unable to get the rhythm he wanted, so he kicks the guitar, throws things and leaves the garage. In Clarence's room, Clarence tells Sumo his plan to put crickets in people's houses to help them sleep at night, and have the people pay them when they wake up. Sumo thinks it's a great idea. After the two put on their burglar masks, they go out on the streets to deliver the cockroaches to the whole neighborhood while the people sleep.

The next morning, on television there is news about an invasion of cockroaches in Aberdale. Mel arrives and tells Chad that they're in the cockroach business. Later, Chad and Mel are outside and Mel counts the money they made for fumigating houses. Inside the house, Clarence tells Sumo that plan C worked because C also stands for cockroaches. Suddenly, Clarence accidentally causes the house the break, so Mel gives all the money they earned to Chad and drives away in his truck, ending the episode. 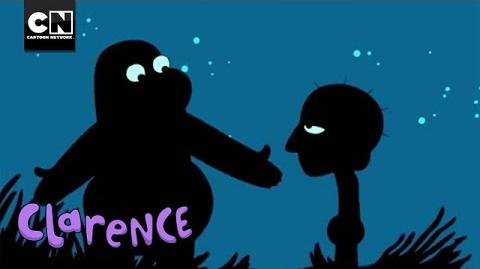 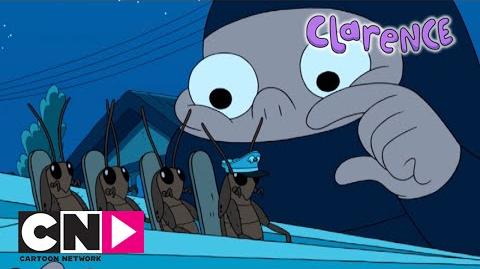 Retrieved from "https://clarence.fandom.com/wiki/Nothing_Ventured?oldid=87114"
Community content is available under CC-BY-SA unless otherwise noted.