Nature Clarence is the seventeenth episode in Season 1 of Clarence.

Clarence, Sumo, Jeff and Percy going on a hike with their "leader", Joshua.

Episode begins with Clarence telling his story about what happened when he and some other kids were on an adventure when Nature Kate. Clarence exaggerated everything, though, and Jeff didn't believe the story. Soon, Joshua arrives and tells Clarence, Jeff, Sumo and Percy that the hike's cancelled because Nature Kate has to save a baby goat.

The kids are disappointed. Clarence asks Joshua why he told Kate that he loves her on the phone, and Joshua says that they're involved romantically. Clarence heard that their relationship is on the rocks, he also says that Kate thinks Joshua's lazy, angry and has no ambitions. This makes Joshua angry, so he decides to take all of them on a hike to Sheep's Bridge. Sumo doesn't think it's a good idea because it looks dangerous, but that is why Joshua wants to go there.

They all go in Joshua's car, but it can't handle the rough terrain and lots of parts of the car pop off. Sumo punches Joshua's seat, and Clarence sings very loudly. The car nearly crashes a big rock, but Joshua goes around it in time, then Percy asks Joshua to open this milk carton. One hour later, more parts of Joshua's car pop off. Percy spits up his milk and Joshua gets distracted, causing the car to bump into a bunch of cacti.

Two hours later, Joshua's car starts letting out smoke and the hood flies off. Sumo continues punching Joshua's seat. Joshua tells him to stop, so Sumo starts kicking his seat instead. Sumo says Joshua doesn't know where they are. Joshua gets so angry that he decides to turn the car around and start going home. Clarence doesn't want to go home, so he, Jeff and Sumo starts chanting "Turn around!" Joshua turns up the radio and starts driving faster. Soon, all the wheels pop off and the car starts sliding, but it eventually stops. Joshua steps out of the car to see what happened, and Sumo runs off like a wild animal.

Three hours later, Clarence, Jeff, Percy and Joshua check their phones to see if they can make contact. Clarence's phone has lots of bars, but a bird swoops in and takes his phone. Four hours later, the four are shown walking in the desert. Clarence says that Nature Kate got them there in only 20 minutes and even gave them granola. Joshua gets angry and tells someone else to lead. Clarence decides to be the leader,

and the others follow him. Five hours later, it's almost dark, and no one has any idea where they are. Clarence looks behind some tall grass and it turns out that they've arrived at Sheep's Bridge. Joshua can't believe his eyes, and the kids start exploring. Clarence tells Joshua to find some matches, Joshua thinks that'll be impossible to find in the wild, but as soon as Clarence leaves to hunt an animal, a box of matches fall on Joshua's head, this makes Joshua start believing Clarence is magic.

Clarence tells the others that he found a hot tub. Joshua thinks Clarence has lost it, but there really is a hot tub there. Clarence and Percy goes inside the hot tub, and Jeff joins them, then Clarence tells Joshua to join in as well. Later, the four are still in the hot tub. Clarence looks up at the stars and talks about aliens in their hot tubs looking down at them, he thinks the aliens aren't having as much fun as they are,

Clarence asks Joshua if he agrees, but he doesn't respond, then Joshua starts going crazy and talking about how they can live at Sheep's Bridge. Joshua starts naming which areas will be what room. As he shows where the ballroom will be, he starts dancing and falls off a cliff. The kids see Joshua holding on the rocks, and they try and figure out how to save him. Percy suggests doing a human chain. Clarence thinks it's a good idea, and they start trying to reach Joshua, but Percy loses his grip and Clarence falls on Joshua.

Suddenly, Sumo and Nature Kate arrives and rescues Clarence and Joshua. Later, Nature Kate drives everyone home in her truck. Joshua tells Kate that he's not cut out for nature, so he thinks they should break up. Kate says that's great because she's already been seeing a guy named Damian, and didn't know how to tell him. All of a sudden, Sumo's goat bites one of Joshua's ears off and he starts freaking out, then the episode ends.

From numerous amount of viewers, the episode recieved a mixed to negative reception. It received negatively in claims of criticizing it for the character, Joshua, not receiving any luck and consistently getting hurt in a result of Clarence and his friends main blame for this reason. 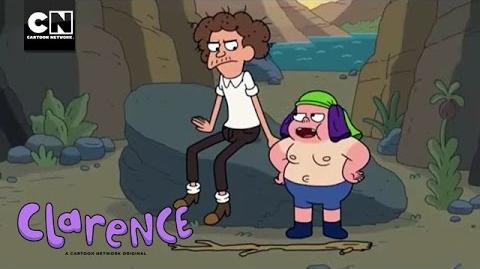 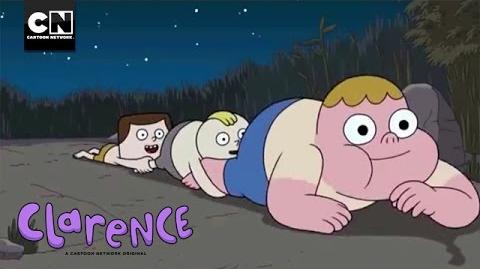 Retrieved from "https://clarence.fandom.com/wiki/Nature_Clarence?oldid=92226"
Community content is available under CC-BY-SA unless otherwise noted.