Lizard Day Afternoon is the nineteenth episode in Season 1 of Clarence.

The episode starts with Clarence and Sumo climbing the Rough Riders statue, only to be yelled at by the Cashier. Jeff says he told them so and claims they should do something constructive. He tells Clarence and Sumo that Belson has a new gaming system and he has a game to go with it.

It's a simulation game called "City Planner 3000", where you can build your own city. He wanted to play so he can build his perfect city. But Clarence says that the world they live in now is a perfect world, even though when the background move back, it should that it wasn't. Jeff still wants to go but it makes Sumo upset, saying that it will be a waste of time. Clarence says that Jeff need to calm down. Angrily, he walks off to Belson's house to play the game. Clarence tells he needs to cool down and now he and Sumo are wondering what to do now. Sumo finds a lizard and they start chasing it.

When Jeff reaches Belson's house, he gives Belson's mom compliments and flowers, and goes inside. Belson was playing the game and Jeff politely asked for a turn. Belson didn't really care and kept on playing. Sumo and Clarence were still chasing the lizard and going through various obstacles. Sumo gets pass them spectacularly while Clarence didn't. He even got his shirt ripped of and made a 'party' shirt. When the reach the lizard to a building, their was the vending machine man who's name tag said Bill. He offered Clarence and Sumo the chips and they took a break. Jeff  was still trying to get a turn by doing nice things for him like making chocolate pudding. Belson was on the game fighting a dragon so said for Jeff to feed it to him. Jeff did, bu Belson ate it sloppily and and disgusted Jeff.

Clarence and Sumo found the lizard again and starting chasing after it and trying to avoid obstacles. They ran into a bush and Clarence found a roll of quarters.

They use to buy ride on a horse and a parachute toy. Clarence soon gets the idea that the lizard was like a genie because of all the great stuff it led to them. Sumo says they should capture it in a lamp so they can have all the wishes they want. Jeff gets angry says that if he doesn't get a turn on the game, he'll leave. Belson was slouching and seemed to be mesmerized. Jeff leaves but it was a bluff. Clarence and Sumo finally got the lizard in a very tall building, but Clarence didn't want to put the lizard in the lamp because he knew it was wrong. He lets him go and he and Sumo cry tears of joy to see him free. Sumo then mentions they should get down from the building before something happens.

Jeff gets stressed out and is fed up Belson's ignorance. He complains to Belson how he organized his closet and clean his bathroom and did all of these nice things for him. He even realized that Belson was mesmerized by the game and wasn't really conscious

of what was going on. Jeff then steals his helmet, takes out Belson's game and put in his game. When Jeff was finally playing he brakes the game console. Clarence and Sumo found Jeff at Belson's house ans showed them the lizard the found. His name was Jeff because they missed him. Jeff tries to keep his own dignity from his arguably pointless bad day by pretending he was playing his video game. Sumo and Clarence realizes the game console was broken and Jeff was faking it so both of them left, upset with Jeff. Then Belson spits out some pudding. 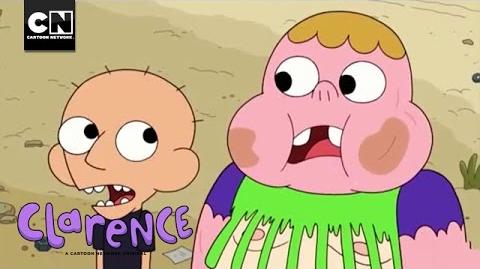 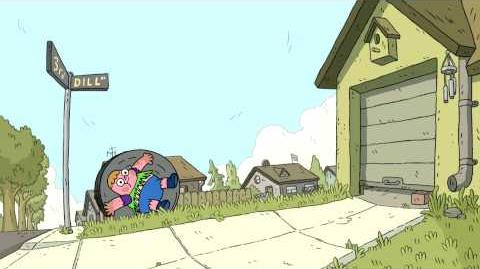 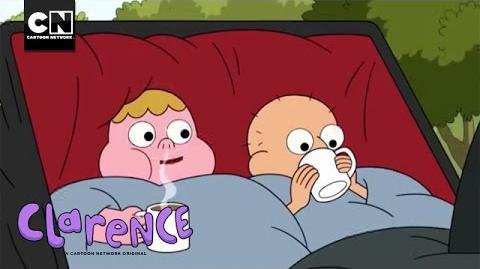 Retrieved from "https://clarence.fandom.com/wiki/Lizard_Day_Afternoon?oldid=92356"
Community content is available under CC-BY-SA unless otherwise noted.