"Jeff's New Toy" is the seventh episode in Season 1 of Clarence.

Jeff and Clarence clash over keeping a toy in its box.[1]

A commercial is shown of the new toy Jeff wants. Jeff does his morning jog. When he gets home, he sees his package. He goes to Clarence's house and Sumo's RV and wakes them up. He shows them the toy at his house and they want to play with it, but Jeff wants to put it on the shelf and never open the box so it can stay in mint condition. They go in the living room to watch the animated show based on the toy.

Clarence asks Sumo to come in the kitchen. Clarence tells Sumo that he can't stop thinking about the the toy and that he really wants to play with it, Sumo eventually decides to help and gives a thumbs up when the coast is clear so Clarence can go into Jeff's room to get the toy. Clarence copies the cover of the toy's box on a printer and tapes it on a tissue box, then he puts that on the shelf where Jeff's toy used to be. Sumo is watching the show when Clarence calls him to come outside.

Clarence and Sumo flies the toy but it bumps the house and it's head falls off. So Clarence tries to fix it but it's no use. Jeff then comes outside and says they should play with the toy. They go into Jeff's room, but Sumo says he's hungry, so that Jeff wouldn't notice his toy is missing. Jeff and Sumo goes to the kitchen to get some food. Clarence tries to staple the toy's head back on, but ends up breaking the head into pieces.

Clarence then goes into the bathroom and squirts everything he can find in there on the toy but it's still not fixed. In the kitchen, Sumo wants Jeff to get him a snack that Jeff never heard of, but he tries to find it. Then,

Clarence calls Sumo into the living room, Clarence says he couldn't fix the toy, Sumo asked if he tried using glue, but Clarence didn't think of trying that, so Sumo suggested that Clarence should tell the truth.

As Jeff walks in and asks who was copying his toy box, he saw that his toy was broken, then he grinded his teeth and some of his teeth came out. Clarence tried to tell a story about how a raccoon broke the toy, but Sumo just admitted that Clarence did it. Jeff angrily yelled at Clarence, and started hitting him as Clarence tries to confess Jeff, but did not listen, until Sumo called the company who made the toy and tricked them into giving him a free one. Later, all of them play court and Sumo says both Clarence and Jeff are guilty, then the episode ends with Clarence, Jeff and Sumo lying on the roof as Sumo flies the robot toy. 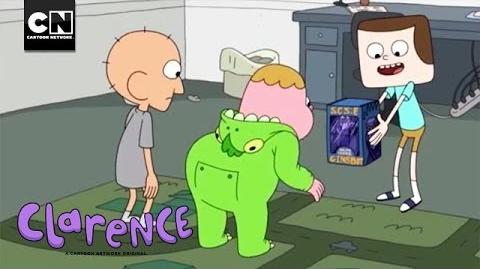 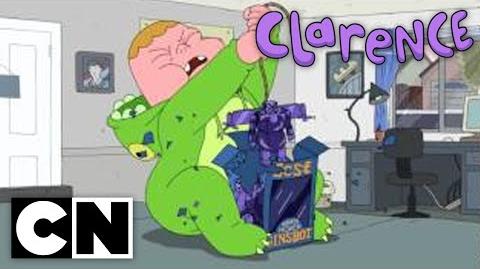 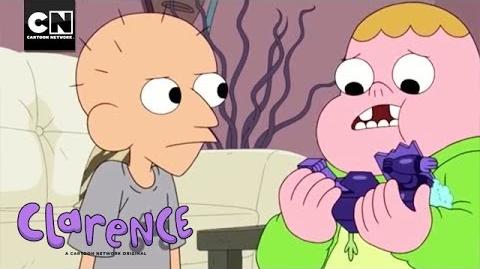 Retrieved from "https://clarence.fandom.com/wiki/Jeff%27s_New_Toy?oldid=93698"
Community content is available under CC-BY-SA unless otherwise noted.