View source
watch 01:36
We're Getting Mutants in the MCU - The Loop
Do you like this video?
Play Sound

In Dreams[1] is the 49th episode in Season 1 of Clarence.

While watching a TV show about dreams, Clarence dozes off and enters the whimsical dreamscape that hovers above Aberdale. Here Clarence can see other people's dreams, experiencing the subconscious of all his friends and neighbors. But when things turn nightmarish, Clarence must find a way to escape back to reality.[2]

Episode begins with Clarence playing with a pineapple and a plant pot in front of the garage. Mary tells him to move while she backs out the car. After Clarence's attempt to launch the pineapple into space fails, he moves out of the way. Mary tells him to close the garage door when he's done because she won't be back home for awhile and she doesn't want the possums to get in there. She also tells Clarence to have fun with Chad, and to not stay up too late, then she drives off.

Later, the garage door is still open, and Chad and Clarence sits on the living room sofa as a documentary all about dreams plays on the TV. Chad is asleep, and Clarence soon falls asleep as well. Suddenly, Clarence remembers to close the garage door, and he goes to do so, then Clarence goes back on the sofa before repeating the process again. When he goes back to the sofa this time, a mysterious young boy is there, and Clarence tries to figure out who he is, but the only thing the boy says is, "I'm Jeremy." Clarence is puzzled, but he decides to go ahead and sit next to the boy. While the boys watch the documentary about dreams, Jeremy gives Clarence a yo-yo. Clarence accidentally breaks it, so Jeremy pulls out another one. The man in the documentary film talks about " dream signs", which are signs to prove that one is dreaming. Clarence decides to look for "dream signs", and as the man on TV lists the different signs, such as counting more than five fingers, and interaction with physical objects feeling strange, Clarence soon figures out that he's dreaming.

Clarence and Jeremy start having tons of fun going on random dreamy escapades around the house. After Clarence and Jeremy sends a giant pineapple to collide with a planet in space, Clarence asks Jeremy if he wants a snack. In the refrigerator, a very tiny Clarence and Jeremy picks out the food they want while Clarence talks to Jeremy about things. Clarence asks Jeremy what it's like living inside his dreams. Jeremy replies, "Pretty good." Clarence also wonders what happens to him when he wakes up. Jeremy doesn't reply, however. Instead, he suggests that they watch some TV. The documentary film about dreams is still on, and Chad wakes up in real life and begins calling Clarence's name. Clarence tries to respond, but since he's still in his dream, Chad can't hear him. Chad is heard talking about how it's getting late, and how Mary is coming home soon. This reminds Clarence about the garage door he was supposed to close. Jeremy was thinking Clarence already did that, but Clarence wasn't sure about that. Clarence and Jeremy went to the garage, and the door was indeed closed. However, Clarence still wasn't convinced.

In real life, Clarence is shown sleeping on the sofa with the garage door still open, and the possums started going inside. In the dream, Jeremy continues watching the dream documentary, but Clarence was too worried thinking about the garage door to watch. Jeremy asks Clarence if he wants to have a party to celebrate closing the garage door, and after the television set falls on him, Clarence finds himself at a huge party with a lot of guests. Several characters greet Clarence and congratulate him for closing the garage door. Even Mary is there, and she gives him a kiss on the forehead. Jeremy lets everyone watch his amazing feat of closing the door on a big screen. However, the video is super inaccurate because after Clarence closes the garage door, he is shown zooming away like a car and leaving tire tracks behind. Clarence was sure he never did that, and he tries to figure out a way to close the real door, then the man from the dream documentary gives him an idea.

In the bathroom, Clarence tries to get his real life self to sleepwalk and close the garage door, but when Jeremy appears, Clarence leaves the room so he can concentrate. This keeps happening several times, but no matter what kind of wild adventures Jeremy takes Clarence on, Clarence continues trying to concentrate as hard as possible. Jeremy begins wondering why Clarence is ignoring him, then dozens of Jeremy heads pop up trying to figure out what's going on. Clarence tries to ignore all the Jeremys because he finally got his real life self into the garage. At that moment, in real life, Mary is shown driving back home and she notices that the garage door is still open with Clarence standing up in his sleep. As Mary's car drives closer to Clarence, Jeremy begs him not to wake up, but he starts waking up anyway, and Jeremy's last words before the dream ends is, "Please remember me!" to which Clarence says he will remember him, ending his dream. Mary catches Clarence before he can fall to the ground, and Clarence wonders if Mary is mad at him for not closing the door. Mary says that she's only a little mad, then she starts taking Clarence inside the house with her while Clarence tells her about his dream, and the episode ends with the man from the dream documentary saying "Dream sign", and closing the garage door. 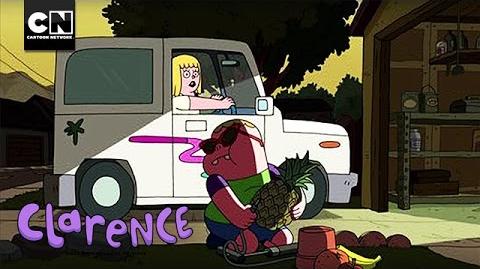 Close the Garage Door I Clarence I Cartoon Network 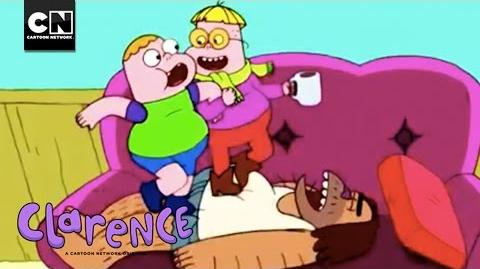