When Mary's mother visits, she interferes in all aspects of Clarence, Mary and Chad's lives.[2]

The episode begins at Clarence's house, Chad is cooking, and Clarence and Mary are in the living room. Clarence thinks he saw Mary picking her nose, but Mary explains it was just an itch. Clarence tells Chad that he's sure Mary was picking her nose, then Chad goes into the living room and makes puns related to nose picking. Suddenly, Dilliss is heard talking outside the door, and Mary starts hiding some items in the closet. Chad is unsure if he should open the door or not, but Dilliss starts knocking and calling Mary's name, so Chad decides to open the door. Chad is confused at first because he doesn't see anybody, then the very short Dilliss walks under him and enters the house. Dilliss is happy to see Mary and Clarence, and she gives them a hug, however, she does not recognize Chad, and confuses him with Damien. Mary explains to her that Damien's gone, and that Chad is her new boyfriend. Dilliss is disappointed because she wanted to see Damien, then Mary invites her to have dinner with them, and Dilliss says that she'll adore having dinner with Mary, Clarence and "strange man", then she goes into the kitchen and continues talking about things.

At the dinner table, Dilliss continues talking, and Clarence is barely able to get a word in. Soon, Chad arrives at the table with meatloaf, and tells Clarence to hand him his "dragon sword". Clarence gives it to him, and Dilliss thinks it's too sharp, so she starts searching her purse for something better to use. After crowding the table with dozens of objects, Dilliss pulls out a small fork and starts stabbing the meatloaf with it, but she accidentally stabs Chad's hand in the process. As Mary runs water on Chad's hand, Dilliss wonders where she's going to sleep, she mentions Clarence's bunk bed and Mary allows her to sleep on it. Later in Clarence's room, Clarence draws a picture and hangs it up on a big piece of cardboard with other pictures. Dilliss enters the room and asks if she can have one of his pictures, but Clarence tells her he needs all of them for a story he's making, then Dilliss starts searching Clarence's room for anything he doesn't need. Clarence quickly gets tired of her and goes into Mary and Chad's room to ask if he can sleep with them. Chad tells him that Dilliss is only staying for one night, but Mary is unsure about that. When Dilliss' voice is heard outside the bedroom door, Clarence joins Mary and Chad in the bed. Mary tells the others to pretend they're asleep so Dilliss will go away, and she does, but suddenly, Dilliss shines a flashlight through their bedroom window, discovering that Clarence, Mary and Chad are awake.

The next day, as Chad brings in groceries, Dilliss opens the door and decides to help him, then she asks him what kind of car he has. Chad replies saying that he shares Mary's car. Dilliss is slightly disappointed and talks about how Damien had a great car, then she puts the bag of groceries on a bush, and goes inside the house, where she constantly talks to Mary about things. In Clarence's room, Clarence works on a school project with Julien, Nathan and Belson. When Belson has to use the restroom, he quickly changes his mind because Dilliss is trying to enter the room, and he closes the door on her. Meanwhile, Chad is at a car place buying a new, blue car. At home, Dilliss opens the curtain while Mary is taking a shower, and tells her her disapproval of a frog clock she found in the couch, then she throws it in the trashcan, also telling her that she doesn't approve of Mary's tattoo, which angers Mary. That night, Mary goes into the living room and Clarence tells her that the TV is broken. When Mary goes into the kitchen, she sees that everything is a mess and that Dilliss is lying on the floor with a paintbrush in her hand. Mary tries to see if Dilliss is alright, then Dilliss wakes up and accidentally slaps paint on Mary's face. Dilliss tries to explain why the kitchen is a mess, then Chad shows up and announces that he bought a car. Mary tells him he's crazy because they can't afford another car. Dilliss wonders if the car is blue like Damien's, and Mary gets mad, then Clarence shows up to tell Mary that Dilliss ruined his school project, and that's when Mary gets really mad. Mary starts yelling at Dilliss and pointing a paintbrush at her. Dilliss backs away from Mary and holds up a toilet plunger to defend herself. The two start fighting with the paintbrush and plunger, and Mary continues complaining about Dilliss taking over the house. When dawn arrives, Seymour arrives at the door and gets angry with Dilliss for being gone for 2 days when they were supposed to just stop by and say hi. Dilliss is happy to see Seymour and gives him a hug, then the two leave the house and talks about Chad, who they think is Damien, and the episode ends with Chad suggesting that they have chili. 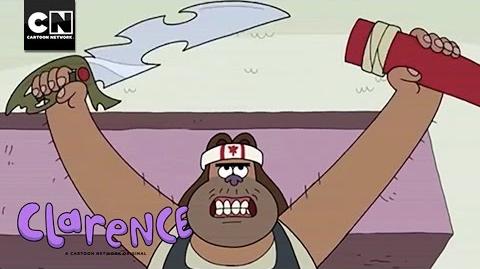 Carving the Meatloaf I Clarence I Cartoon Network 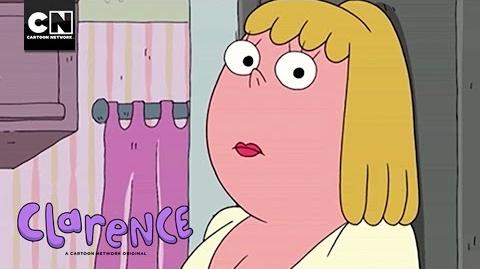 Retrieved from "https://clarence.fandom.com/wiki/Hurricane_Dilliss?oldid=91657"
Community content is available under CC-BY-SA unless otherwise noted.