Hoofin' It is the thirty-eighth episode in Season 1 of Clarence.[1]

Everyone's excited for the annual Aberdale Greased Pig Chase, except for Clarence.[2]

The episode begins with a bunch of people chasing Clarence. After a log falls off a cliff, Clarence flies out, and there, the scene pauses and shows Buckey O'Neill sitting in his chair near the fireplace. Buckey O'Neill decides to tell the story of how Clarence got in all that trouble from the start, so the story begins in the treehouse where Clarence cries about Butterscotch the pig getting chased around every year at the Greased Pig Chase. Sumo and Jeff tries to get him to calm down, and Jeff assumes that pigs don't have feelings, which makes Clarence cry even more. Clarence and Sumo tries to come up with a solution, then Jeff suggests that they dress Clarence up as a pig and get chased in Butterscotch's place. Clarence and Sumo thinks that's a great idea, and before Jeff can finish telling them it was just a joke, the two have already ran out the treehouse to get ready.

That night, as Clarence lies in the cart, two kids called Cooter and Seabass looks inside and sees Clarence, who they think is Butterscotch, and mentions that it'll be easier to catch than ever because of how big he looks. At the treehouse, Butterscotch is still on top of Jeff, making him unable to get any sleep, and Buckey O'Neill laughs about that, then he gets back to the story. The next day, the Annual Greased Pig Chase is getting started, and Donna-Joe Judley welcomes everyone. As Sumo gets ready, Cooter and Seabass talks to him about how they're going to catch the pig. Donna-Joe tells a guy named Randall to grease the pig, who is actually Clarence. When everyone lines up to start the race, Cooter knocks Sumo down, but Sumo quickly gets up and starts running. Clarence is released from the cart and sees everyone running toward him, so he runs off. Everyone tries to catch Clarence, but he manages to avoid them, then everyone surrounds him, and Clarence jumps out the middle. When he has nowhere left to run, he jumps over the fence, and Donna-Joe allows everyone to continue chasing him outside the pen. Jeff watches the race through his binoculars and tells Butterscotch she's lucky that it's not her getting chased, then all of a sudden, Butterscotch jumps out the treehouse, and Jeff grabs her by the rope, causing the wall the break off.

Meanwhile, everyone continues chasing Clarence in the woods. When Clarence stands on top of a log, he falls through it, and sees an exhausted Sumo walking outside through a hole in the log. Sumo starts calling Clarence, and Clarence lets him know he's inside a log. At that moment, Seabass and Cooter shows up and finds Clarence. The two go inside the log, and Clarence tries to explain it's just a misunderstanding, and Seabass thinks they found a talking pig, so they continue trying to catch him. When Sumo goes inside the log to help Clarence, the log starts rolling and falls off the cliff, which causes Clarence to fly out, (just like at the beginning of the episode), and land in a puddle. The water washes off the grease, making everyone realize the pig was Clarence the whole time, and they start demanding for the real Butterscotch. At that moment, Butterscotch is shown running nearby with Jeff on her rear, and everyone starts chasing her. At the pigpen, Donna-Joe is bored while eating a candybar. Suddenly, all of the contestants return while chasing Butterscotch. Donna-Joe announces the winner; Jeff. Everyone gets angry because it looked like it was Butterscotch who caught Jeff. One man throws a barrel at the prize, and everyone goes mad. There is great chaos, so Clarence decides that he, Jeff, Sumo and Butterscotch should leave. The chaos gets worse, so bad to the point where the firefighters and police arrive, and that part, Buckey O'Neill stops telling the story and tells Damien that they can't show any of that to the kids, ending the episode. 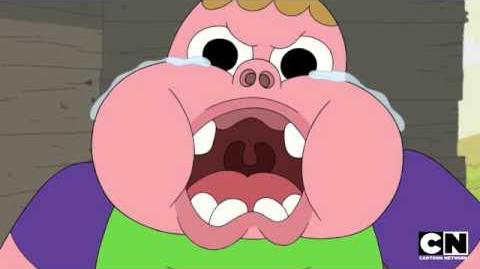 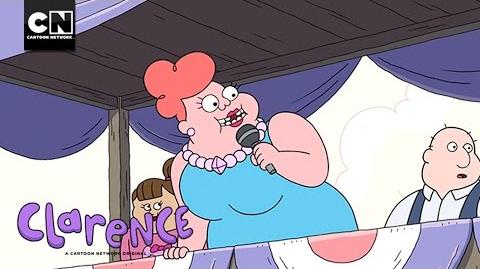 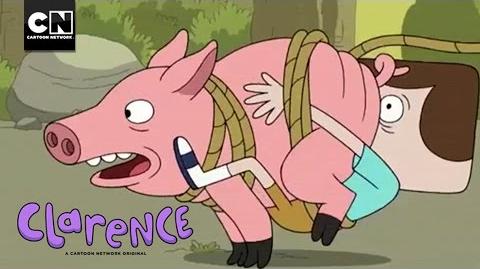 Retrieved from "https://clarence.fandom.com/wiki/Hoofin%27_It?oldid=92370"
Community content is available under CC-BY-SA unless otherwise noted.