Hairence[1] is the 40th episode in Season 1 of Clarence.

Clarence is working at his mother's hair shop! The excitement gets ruined by a demanding woman named Sandy.

The episode begins with the children excitedly running out of the school building because it's Summertime. Clarence narrates while he, Jeff and Sumo talk about what they're going to do for the summer; Sumo is going to the Aberdale swimming hole and catch leeches, Jeff is going to do something on a computer, and Clarence is going help out his mom at the hair salon called "Hip Clips", Clarence mentions that it didn't work out the way he planned, then he tells the viewers to just watch the episode to see what he means.

In the morning, Mary opens the salon with Clarence following close behind. Mary turns on the lights, and Clarence is amazed by everything. Mary gets tired of Clarence gasping everywhere she turns, so she hands him a magazine to read and tells him to sit down. When Mary lights up the "OPEN" sign, it's shown that Sammy and Kevin have arrived, and they are very busy. Mary makes sure the other workers are doing everything right, and Clarence finishes reading all the magazines, so he gets up and answers a call on the telephone, but Mary doesn't approve. When Kevin had just finished giving Bos a haircut, Clarence rips tape off Bos' leg, removing some of his hair. Mary tells Clarence not to wax the customers, so she gives him broom duty.

Clarence begins sweeping up all the fallen hair into a big pile. As Mary talks on the phone, she gives Clarence a cup of water to give to Chad. Outside, Chad is dressed as the Statue of Liberty advertising the Hip Clips salon, but he doesn't do a very good job. Clarence hands Chad the cup of water, however, it turns out the cup was empty. In the salon, Mary asks Clarence to take out the trash, and Clarence goes to do so. Clarence sweeps his huge pile of hair in the back of the salon outside where the trash is, then he pours green shampoo on the pile of hair and starts shaping it. Suddenly, Clarence sees a man on a motorcycle, and the man goes inside the salon for a haircut. The man has almost no hair and he speaks mostly making motor sounds. Sammy is unsure if she's supposed to cut his one red ponytail, until Mary steps in and cuts all the tiny hairs and leaves the ponytail there, this makes the man very happy, and Clarence is proud of Mary, so much so that he kisses her arm. At that moment, Mary hears a motor chair approaching. Everyone gets nervous as they find out it's Sandy, a very demanding and rude woman. Clarence gets scared and runs off.

When Breehn's mom, Tiffany is signing a paper at the desk, Sandy rudely gets in the way and demands to see Mary, who she calls "the blonde one". Sandy sees Clarence sweeping and disapproves of a child working at the salon. Clarence gets mad, and Mary takes the broom from him so that there doesn't be a fight. Mary pretends that Clarence wasn't working, but just playing with the broom, she then tells Clarence to take a break and sit down. Kevin puts down a ramp for Sandy to drive her motor chair up to the higher floor, but ends up crushing Kevin's fingers. Clarence is angry that Mary and the others treat Sandy so nicely while she is so rude to them, and clips are shown of Sandy getting meaner and meaner everyday that summer.

One day, it is very hot in the salon, and Mary and the others are exhausted, cleaning up the messes Sandy made. Mary hears something outside the door and worries that it's Sandy again, but it's turns out that it's just a guy named Willy, who is giving out chili. He gives Clarence some chili, and starts singing his dilly, but at that moment, Sandy busts through the door and knocks Willy and his chili cart down. Sandy rides her motor chair over Kevin, this makes Kevin so angry that he leaves the salon. Sandy shows Mary her coupon, claiming that it's for a free shampoo when it's a really a coupon for Chuckleton's family restaurant, but she gets her way by pointing out the "Customer is Always Right" sign. Mary tells her where the shampoo is, and Sandy rides her motor chair on top of Mary's toes. Sandy demands to use the big mirror, and while there's no sink at that one, Sandy gets her way again. Sandy also demands to use the green shampoo, so Mary goes to get some. Clarence is nervous because he used all the green shampoo to style the swept hair, he tries to tell Mary, but she was too busy looking for the shampoo to listen.

Outside, Clarence talks to "Hairence", a green shampoo hair sculpture of himself. Clarence hugs Hairence, telling him that he doesn't know what to do. Suddenly, it starts to look as if Hairence became alive, and he got up and started walking with Clarence riding on his shoulders. In the salon, Sandy tells Sammy to turn on her favourite song, and Sammy does so. The song causes Sandy to fall asleep, and at that moment, Hairence enters the salon and starts climbing Sandy, and when they reached the top, Sandy wakes up and sees Clarence holding a big ball of green shampoo hair, which he dumps on her head, revealing that Clarence just imagined the part of Hairence becoming alive. Sandy is enraged and she yells very loudly, so that Chad heard the yelling from outside. Sandy goes after Clarence to attack him, but Clarence quickly gets out of the way, making Sandy fall on her motor chair. The motor chair activates, causing Sandy to ride on the motor chair backward and bump things. Chad opens the door to see what's going on, and the motor chair drives Sandy out of the salon. As everyone watches Sandy go away, Clarence worries that he's going to be in a lot of trouble, but then Sammy and Mary starts laughing about what happened and Clarence starts laughing too. Clarence mentions that he's not allowed in the salon anymore, but he got to start advertising the salon with Chad outside, he also mentions that Gonnar, (the motorcycle man from earlier) brought his friends to the salon, and that Sandy never came back, and the episode ends with Kevin being disgusted by Clarence's hair sculptures in the back of the salon. 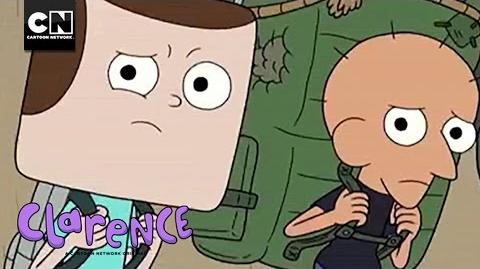 Summertime I Clarence I Cartoon Network 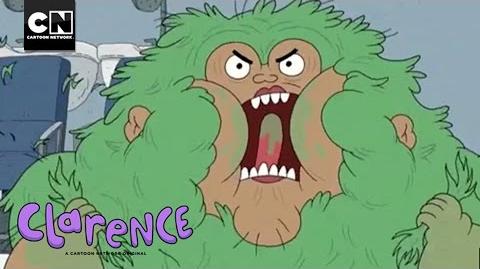 Retrieved from "https://clarence.fandom.com/wiki/Hairence?oldid=91559"
Community content is available under CC-BY-SA unless otherwise noted.