Goose Chase is the thirty-second episode in Season 1 of Clarence.[1]

Clarence imagines himself as the king of the birds until a persistent goose gets greedy.

The episode begins with some people in Bendle Park having a good time. Bradster is shown jogging, and as he's talking to his friend on the phone, Clarence jumps out from a bush. Bradster gets scared and runs off. Clarence continues hiding in various places for fun until he gets hungry. Clarence imagines his stomach talking to him, then he looks in his bag for food, but he gets distracted by playing with the other things in his bag. When Clarence finally pulls a sandwich out of his bag, he goes to eat it on a different bench, but he starts talking to the sandwich instead. While he's doing that, a crumb drops on the ground and a bird eats it. Clarence tells the bird the sandwich isn't for it. Suddenly, two more birds arrive and Clarence tries to get them to leave. At that moment, an old man starts talking to Clarence about how he was recently feeding the birds, and that's when Clarence decides to share his sandwich.

Suddenly, the big goose appears and Clarence tells it that he's already out of food. When he tries to walk away, the goose blocks him. When Clarence tries walking in the opposite direction, the goose follows him, so Clarence runs away as fast as he could until he couldn't see the goose anymore. Clarence sees a couple of kids playing ball, but then he sees the goose standing in the goalie net, Clarence looks again and the goose isn't there anymore. Clarence walks over a bridge, but when he looks in the water, he sees the goose's reflection, but the goose isn't really there. Clarence gets nervous. When a quick moving shadow goes by, Clarence thinks it's the goose, but soon realizes it was just a kite. Clarence tries to get himself to stop being scared, then he hears a honking sound and hides, but it turns out it's just a woman blowing her nose. Clarence also gets scared by a squeaky swing set, which he thought was the goose as well. When Clarence sees a goose, he's relieved that it's a different one, and just when he thinks he had nothing to worry about, that goose he was running from appeared. Clarence runs away in terror.

As he's running, he falls down a cliff. The goose flies down the cliff to look for Clarence, but Clarence hid in a pile of mud. The goose doesn't notice him at first, but when Clarence's stomach growls, the goose turns around and finds him, causing Clarence to run away. As he's running, he tells everyone in the park to watch out for the goose. Clarence runs inside a sewer pipe and soon has nowhere left to run. As the goose walks up to him, Clarence decides to jump down the other side of the pipe. The goose follows him out of the pipe, and that's when Clarence decides he's tired of running, so he asks the goose what it wants from him, and the goose simply flies off to join the other geese who are flying. Clarence says bye to the goose and tells his stomach that he's gonna get some food. As Clarence walks home, he continues talking to his stomach about things. Suddenly, all the flying geese swoop down to attack Clarence, and Clarence gets scared, ending the episode.

The gallery for Goose Chase can be found here.

The transcript for Goose Chase can be found here. 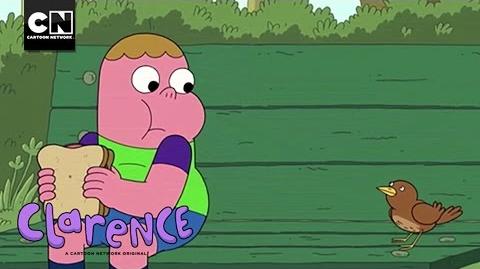 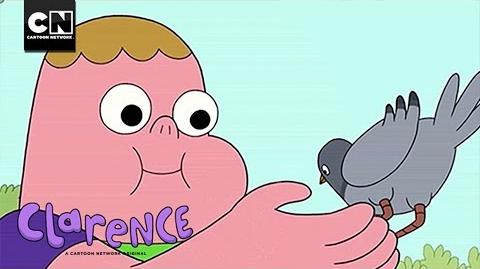 Retrieved from "https://clarence.fandom.com/wiki/Goose_Chase?oldid=89630"
Community content is available under CC-BY-SA unless otherwise noted.