Goldfish Follies is the thirty-third episode in Season 1 of Clarence.[1]

Clarence struggles to get his new goldfish friend into water when its bag breaks.[2]

The episode begins with Clarence walking around town and greeting people along the way. Clarence speaks to Randy, who is giving out newspapers, Randy gives Clarence a newspaper, and Clarence gives him a coin, which makes him very happy. As Clarence walks down the sidewalk, he reads the paper, in it is an advertisement for a free goldfish, which catches his eye, so he tries to get to the store as fast as possible, even if it takes climbing over giant people to get there. Soon, Clarence finally arrives at the pet shoppe, and he flies in to get his free goldfish, but not before wiping his feet. Clarence asks the storeowner for the fish, and storeowner agrees to give it to him, but he has something else to say first, which he has a hard time saying because Clarence keeps interrupting with his happy dance. The storeowner tells him to listen, then he tells Clarence that he doesn't have the accessories he needs for the fish, so he shows Clarence all the things he needs, but Clarence tells him he doesn't need any of it because he has his own fish tank filling up at home, which is shown overflowing. Clarence takes the fish and exits the store, leaving all of the necessary accessories behind, which makes the storeowner angry and he complains to his dog employee about the idea of giving away free fish.

Outside the pet shoppe, Clarence plays with the goldfish, making the bag it's inside slide around on his arms, then Clarence accidently sends the goldfish flying. Clarence notices pointy nails on the ground, and he quickly puts corks on the nails so that the fish's bag doesn't pop, which works just as planned. Clarence runs off and takes the goldfish with him, having to avoid other sharp things along the way. Clarence puts the goldfish's bag on a pillow, which pops it, leaving the goldfish out of water. Clarence panics, but quickly comes up with the idea to put the goldfish in his mouth, then he slides under a watering can and makes the water go into his mouth for the fish. The goldfish is very pleased, so much so that it kisses the inside of Clarence's mouth. Clarence continues walking around town, then he sees the man who was giving out hotdogs crying because the hotdogs are falling into a manhole. The goldfish tells Clarence to save the hotdogs, so the goldfish uses Clarence's mouth as a cannon, and jumps into a glass of water. The hotdog man continues crying, then Clarence turns into a superhero, and flies down the manhole. When he reaches the bottom, he stuffs his mouth with dozens of hotdogs and shoots them back up the manhole. The hotdogs cheer as they go into their hotdog buns, and one goes into a dog's mouth.

Clarence continues sending hotdogs up the manhole, then Sumo calls him on his can phone. Sumo tells Clarence that he's waiting for lunch, then Clarence offers hotdogs, and sends him through telephone wires to Sumo's house. Sumo and his brother celebrate, and Clarence flies out the manhole and fixes the knocked over hotdog cart. The hotdog man is so happy that he gives Clarence a hotdog, and offers some additional condiments, then Clarence goes to get his fish, but to his surprise, a woman is drinking water from the glass his fish is in. The goldfish soon goes into the woman's mouth, and Clarence panics, then the woman is shown eating pasta. Clarence paces for a bit as he tries to figure out what to do, and when a copy of himself appears, he comes up with an idea, and the two Clarences combine into one. Clarence runs up to the table, and pulls the long noodle out of the woman's mouth, rescuing the fish, and pulling the woman's teeth out. The goldfish flies into the air and bounces off of things in a parade. The goldfish lands on a seal's nose, and Clarence chases after it. When Clarence body slams the seal, it falls off it's beach ball, and the goldfish goes flying into some tubas that some men are playing, and the goldfish flies from one tuba to another. Clarence kicks one of the tuba players, and the goldfish goes flying up in the air, hitting a balloon, and landing on the ground. At that moment, a bear and some kids are shown jumping on pogo sticks, Clarence worries that they're going to smash the goldfish, but they jump over it.


Suddenly, two guys with loud shoes show up, and Clarence worries that his goldfish is going to get stomped on, but the guys go around it, then Clarence sees a steamroller approching and screams. The steamroller flattens the goldfish, and Clarence uses his tongue as a spatula to put the fish in his mouth again. Clarence searches for water, then he sees a truck full of water filling up a parade float. Clarence detaches the tube, and makes the water go into his mouth. The goldfish is pleased, and starts slapping it's butt to celebrate, and Clarence does the same, then he attaches the tube back to the parade float, and finally starts making his way home, but as he's trying to get there, the water in his mouth begins going down. When Clarence arrives at his house, his mom arrives at the same time, and asks him to help her with the groceries. Clarence doesn't want to do it, so he makes his arms extremely long to pick up all the bags at once, but he has trouble lifting that much. The goldfish worries and jumps down Clarence's throat, Clarence's heart tells the fish he can't do it, so the fish starts punching the heart to give Clarence enough strength to lift all the bags. Clarence's mom tells him to make two trips, but Clarence still takes all the bags into the kitchen at once, then he runs into his bedroom and puts the goldfish into the fish tank. Clarence tries to see if the fish is okay, then the fish slaps his face, and tells him to carry it in water next time, instead of in his mouth. Clarence apologizes, and the goldfish suggests that they sing a song, so Clarence and the fish gets their top hats and canes, and starts singing and dancing, then it's revealed that Clarence was imagining the whole thing, and Mary enters his room to ask about the water on the floor, and Clarence is shown dancing in his underwear all alone, so Mary leaves the room without quesioning anything, ending the episode. 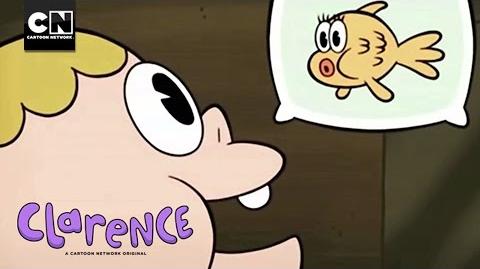 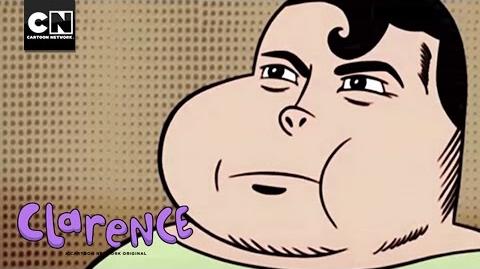