Flood Brothers is the 10th episode of Season 3, the 100th episode overall of Clarence and also the 6th and the final episode as the part of the "Clarence's Stormy Sleepover (Miniseries)".

As the storm gets worse, everyone gets stuck in the school's gym and eventually fight. After Clarence gets them to get along, the big flood occurs and everyone works together to block the flood from entering the school.

Following the events from the other episode, as the storm gets worse, every civilian in Aberdale stuck in the school's gym, they all think that Clarence presumably died. Jeff gone crazy and he thinks he is responsible for the death of his friend.

Suddenly, EJ, Mrs Baker, Mrs Julep, Mr Reese and Belson arrived at the gym, along with Clarence, everyone hug him.

With group reunited, they must think plan how to escape their deaths from this storm madness, mayor decides to use the helicopter, but it got destroyed by an unknown reasons, which Chad yells that there is no helicopters and they are all going to die.

As the matters have gotten worse, all fight, Clarence dragging and pulling Mrs Baker back, crying and begging her to not to leave them. Jeff tries to confess them that he is the responsible for this nightmare. But no one listens...suddenly, the badger comes out, revealing itself...Candice!

Sumo joyously hugs it, as Mel forgives it.

But it didn't take it very well, because the storm unleashes it's fury. They are all about to meet their deaths, but Mrs Baker, gets enough confidence to tell everyone to work together to escape this nightmare, all worked it out. They all celebrate.

Then Balance reads the book to his baby, indicating that from The Phantom Clarence to the end was entire plot narrated by Balance, then Jeremy reveals himself as a baby and son of Balance! Episode ends. 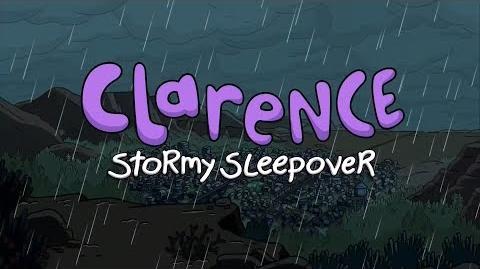 Retrieved from "https://clarence.fandom.com/wiki/Flood_Brothers?oldid=93670"
Community content is available under CC-BY-SA unless otherwise noted.