Fishing Trip is the 35th episode of season 2, the 86th episode overall of Clarence.[1]

Mel learns that Chad has never taken Clarence fishing and decides to remedy this with a bonding trip for all the boys; Mel and Clarence learn a bit about each other while Chad struggles with the ins and outs of fishing.

The episode begins with Sumo and Mel Sumouski hammering some traps for crabs, then Clarence, Jeff and Chad arrive, the latter speaks with Mel, Clarence and Sumo put their faces inside the crab traps, then Clarence opens a box of hooks and ask Mel if they are toys, he says no and Clarence sticks some fingers, then Mel asks Chad if he never took Clarence to fish, he gets nervous and Jeff presents his multipurpose tool, suddenly, Mel He decides to take everyone fishing.

On the dock of Aberdale Lake, everyone gets ready, Chad goes with Jeff and Sumo, while Mel takes him to Clarence, Chad gets on the boat and accidentally throws Jeff's briefcase; Mel and Sumo make a bet, if Mel wins Sumo she should bathe her dogs, otherwise, Sumo will slide through the garbage in the yard and then everyone will get on their boats to start fishing. Mel explains some things to Clarence, while Chad is trying to teach Jeff and Sumo how the fishing rod works, but Sumo ignores him and sets out to find a lot of fish.

Then, Clarence asks Mel a few questions and Sumo teaches that to catch fish you have to put your head under water, Chad and Jeff resign themselves to that, but Sumo forces them to do it; Mel tries to teach Clarence how to fish with a rod, however, Clarence throws the rod into the water. Both groups are still trying to catch something, suddenly, accidentally Clarence holds Chad's hair with the rod and draws him to his boat, Chad fell into the lake, Jeff and Sumo try to rescue him, but the latter gets angry with Jeff for using too much of his multipurpose tool and throws it, at that time Sumo saves Chad with an oar, the fish ate part of his hair, which misses Jeff and Sumo a bit.

Then, Mel and Clarence catch a few crabs using Chad's hair, while he keeps catching fish, both groups catch many fish and crabs, until a lizard arrives that wants to eat the boat of Chad, Jeff and Sumo, however, the animal quickly leaves, attracted by Chad's hair that Jeff threw. While both groups enjoy, Clarence throws all the crabs back into the lake; then, everyone is packing things to return, Chad was left bare and Sumo celebrates winning the bet. Then, Sumo slips into the garbage, the episode ends when Mel says that Sumo must still bathe his dogs.

The gallery for Fishing Trip can be found here.

The transcript for Fishing Trip can be found here. 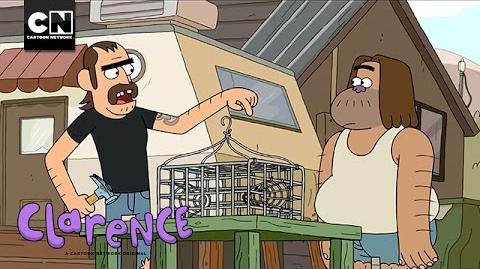 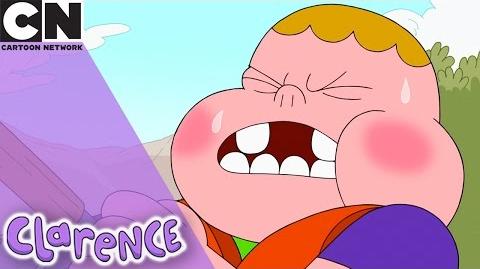 Retrieved from "https://clarence.fandom.com/wiki/Fishing_Trip?oldid=92607"
Community content is available under CC-BY-SA unless otherwise noted.