Etiquette Clarence is the 38th episode of Season 3, and the 128th episode overall of Clarence.

Clarence submits a short story into a creative writing contest, and he's overjoyed when he learns he's accepted as a finalist! But when Jeff finds out Clarence has to attend a formal dinner, he fixates on transforming the messy Clarence into a proper gentleman.

At 3:00 AM at Clarence's house, Clarence reads Mary a book he wrote himself. When he finishes reading it, he immediately falls asleep, next to Mary, and Chad , who sleeps on the floor. The next day Clarence drinks orange juice and reads a story in a story book. In one of the pages of the book, Clarence discovers that there is a competition for children who write books and runs to his mother to ask if he could participate. Mary allows her to see that the story will be published and Frida A. Ra will be in the competition. When Eugene arrives, (the mail guy), Clarence hands him a letter with the book to participate in the competition. Eugene throws the other mail in the mud and takes only Clarence's letter. Time passes and the mail is still there.

The next night, Clarence invites Jeff to sleep at home and reads his story. Jeff gets excited and talks about the competition, Clarence mentions that he already sent the mail and that he would like to win so that his story is published. When both fall asleep and Clarence turns off the light, Eugene quickly arrives and looks out the window, Clarence immediately wakes up and turns on the light, Jeff is scared to see Eugene, who only came to deliver to Clarence the response letter of the competition. Mary enters the room with a baseball bat, but leaves because it was only Eugene and there is nothing to worry about. Clarence opens the letter with his teeth, angering Jeff. Jeff reads the letter; Clarence has been invited with his family to an oriental-style hotel called "Shamada Inn," which is where the winner will be announced. Clarence does not mind formal dinner, but Jeff is upset by his attitude and convinces him to start caring. Clarence asks Jeff for help to help him be smart, and he accepts without thinking.

The next day, Eugene passes by Jeff's house and delivers a guide to be stylish in the old style. Jeff shows the book to Clarence and sits in his bed waiting for Clarence to study. Clarence reads some pages and gets tired, and asks Jeff to study later because he is hungry. Jeff accepts and takes Clarence to the kitchen, and takes the opportunity to teach Clarence how to be elegant during a formal dinner; Jeff explains to Clarence that he must be patient to have a drink, first he must hold the glass and turn it, then smell the drink and finally drink a little drink. Clarence does it too much and Jeff prefers to go to lunch (using French fries and chicken from Rough Riders); Clarence tries to eat a fried potato with his foot and Jeff gives an unpleasant surprise when he hits it with a plastic hand. Jeff also hits him several times because he does not know which fork to choose. Clarence tries to eat a chicken nugget but Jeff avoids it, hitting it several times with his plastic hand, because he forgets some details.

The next day Jeff arrives at Clarence's house and is surprised to see him reclining in the mud, without clothes (except for his underpants). Jeff orders him to go for a swim, but not only that, but it takes him a long time to make him bathe in an elegant way. Mary waits outside the bathroom with a makeup case, Jeff and Clarence come out and Jeff takes the case to make up Clarence. In Clarence's room, Jeff tells her how to dress and places old women's makeup on her face. Later, Chad leaves Clarence, Mary and Jeff at the "Shamada Inn", and Clarence looking like an elegant old woman. Mary and Clarence enter, but Jeff stays behind a pot with his walkie-talkie to talk to Clarence, since he was not invited to dinner and may not be there to guide him. When Clarence and Mary enter the restaurant, Percy and his mother arrive at the hotel. In the restaurant, mothers and children sit on two separate tables (there are also Coco and her mother ). Clarence greets the mayor (kissing his hand) and Frida A. Ra , the mayor is frightened by his behavior and sends him back to his table.

Percy asks Clarence questions and Jeff tells him not to answer until all the ladies talk. Percy becomes sad because he thinks Clarence is angry at him, and at that moment Coco sneezes, allowing Clarence to speak; however, before being able to respond to Percy, an old woman passes and Clarence must let her pass, as Jeff taught her. At dinner time, the main course is fish, and Jeff explains to Clarence that he must open each piece of fish to make sure there are no thorns, Clarence listens to him and ends up without dinner because he is doing what Jeff ordered him to do. . When reading the stories to announce the winner, Jeff realizes that he did not train Clarence to give his speech, and while Percy reads "The Tales of Mardrynia II", Clarence hides under his desk to write down what Jeff He tells. Clarence tries to write in one of the decorations of the dress that Jeff chose, but they break and he is forced to use ketchup to write, while Coco reads his story. When it's Clarence's turn, he stays writing on the floor. When Clarence decides to go onstage, he realizes he can not give a speech, and mentions that all he wanted was for his story to be published so that all children can read with their parents. An old man goes crazy because Clarence was the kind of guy he wanted to see, but the mayor immediately calls security to be taken away.

The mayor announces that the winner is Clarence and his mother takes the stage to celebrate with him. The next day, some children read the story to their parents at bedtime. Clarence watches with Eugene, happy to see that what he wanted is done. 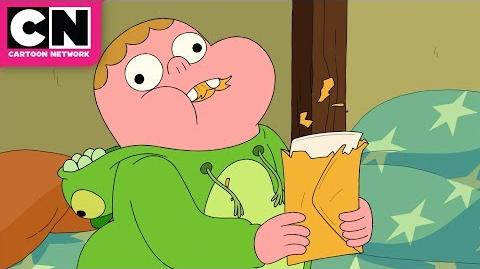 Retrieved from "https://clarence.fandom.com/wiki/Etiquette_Clarence?oldid=87964"
Community content is available under CC-BY-SA unless otherwise noted.