Dog King Clarence is the 33rd episode of Season 3, and the 123rd episode overall of Clarence.

When Clarence's neighbor Gale recruits him to dog sit for her, he knows it will be a breeze; however, Gale's dog proves to be a little more challenging than he expects. [3]

Episode begins with Clarence walking the streets of Aberdale and greeting all the dogs. Suddenly he finds a dog named "Mario" and his owner tells him that Gale has trouble taking care of her dog Cookies, so Clarence goes to her home.

Already at Gale's house, she notices that her dog is difficult to care for, but Clarence believes there is no problem, so Gale leaves. Clarence tries to play with the dog, but when he does not recognize him, he barks and tries to bite him. Meanwhile, Clarence explores Gale's bathroom, there's a toilet with a pillow and there's also a phone on the wall, so he calls Mary. After the call is done, he explores Gale's room and a doll room, which scares Clarence.

After that, Clarence tries to give food to Cookies and he throws spaghetti to his food, but the dog gets angry and Clarence takes him for a walk. However, Cookies causes Clarence to get tangled up with the rope and he falls on the road, then he is seen chasing the dog and finally they go back to Gale's house. Clarence sits in the chair to reflect, and he admits that he is definitely no king. Suddenly Cookies takes a shoe from Clarence, so he chases him in the kitchen, causing a disaster.

After retrieving his shoe, Cookies bites Jessica and keeps her trap in his jaw. Clarence worries and demands Mr. Cookies to put Jessica down. He then comes up with an idea.Clarence disguises himself as Gale so the dog can follow his orders. Mr. Cookies puts Jessica down and treats Clarence the same way he does to Gale. At that moment Gale arrives and Clarence leaves the house, Gale asks him to stay to help her with the dog and to return her clothes, but Clarence ignores her. Finally, Gale gets into Jessica's tank. 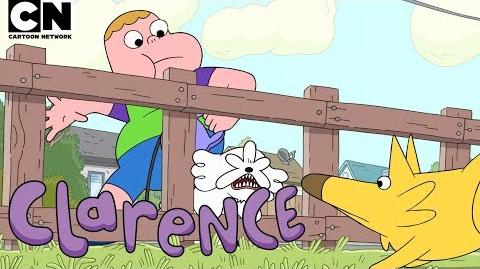 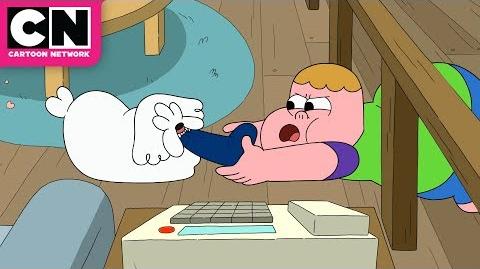 Retrieved from "https://clarence.fandom.com/wiki/Dog_King_Clarence?oldid=90291"
Community content is available under CC-BY-SA unless otherwise noted.