Dinner Party is the eighth episode in Season 1 of Clarence.

When Clarence Wendle attends a stuffy dinner party with his mother, he tries to find fun wherever he can.[1]

The episode begins with Clarence Wendle in the backseat of the car, pretending his fingers are running across the telephone wires as they pass by. Mary Wendle then tells Clarence and Chad to be on their best behavior because she wants to make a good impression at Walt and Tiffany's dinner party.

Chad isn't interested in going to the party because he thinks Walt and Tiffany (Breehn's parents), are weird, but nevertheless Mary tries to reassure Chad that they aren't weird, they're "cultured". After Chad almost crashes the car (He was doing exactly what Clarence was doing earlier.), they arrive at Breehn's house, gently crashing into someone else's car as they park. While all the adults are eating, Breehn's parents talk about how great their house is, much to Chad's boredom. Meanwhile, Clarence, Jeff, Sumo, Percy and Chelsea are all having fun and making a mess at a different table. Some drinks spill on the floor and Breehn says he's glad his parents got stain-proof carpets. Clarence thinks that's amazing and wonders what other secrets Breehn's house holds, so Clarence and his friends decide to explore the house and eventually discover the attic. Breehn tells Clarence that they can't go in there and his mom looks at them in a way that says "Don't even think about it!". Breehn suggests going to the basement instead and his mom allows it.

Breehn's parents take the adults to the bathroom to check out the sink.

Meanwhile, the children all go into the basement and Clarence orders them to find whatever they can. Clarence finds some insulation and reaches for a handful, thinking it's cotton candy. Jeff warns him not to touch it because it's full of fiber-glass, but he is too late. Clarence's hand burns from the insulation, causing Breehn to freak out. Jeff calms him down and after running water on Clarence's hand to cool the burn, Clarence feels fine again. Chad grows even more bored and decides to sneak out to see what Clarence is up to. When he gets to the basement, Chad plays with the kids. After a while, they all decide to go into the attic, despite Breehn's warnings not to. Meanwhile, Breehn's parents continue to talk about how great their house is. Mary tries to add to the conversation, but is told to be quiet.

When Chad, Clarence, and the others get to the attic, they begin hunting for ghosts, but find nothing.

Right when they're about to leave, Clarence hears a noise and thinks it's a ghost. Chad then notices that the floor is crumbling apart right where Clarence is standing and pushes him out of the way just in time, only for him to end up getting stuck in the floor, frightening the parents downstairs. Clarence and the others try to pull Chad back up, but the ceiling bursts apart, causing them all to fall to the ground floor below. Traumatized and furious, Breehn's parents tell them that they'll pay for what they've done. Then, Ryan Sumouski's dad points out that if any of them got hurt, they could sue. Realizing this, Breehn's parents let them off the hook.

Upon leaving, Clarence and Chad assume they're both in trouble until Mary starts cracking up about the accident. She admits that she was getting bored at the party too and calls Walt and Tiffany "snobs". As they're driving home, Clarence pretends that he, Mary and Chad are jungle people running across the telephone wires. Clarence jumps over the moon, but Chad bumps into it and gets hurt. Mary then stops to make sure he's ok, and the episode ends. 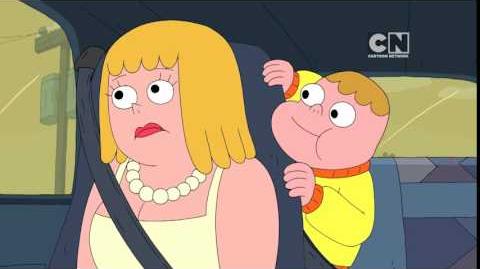 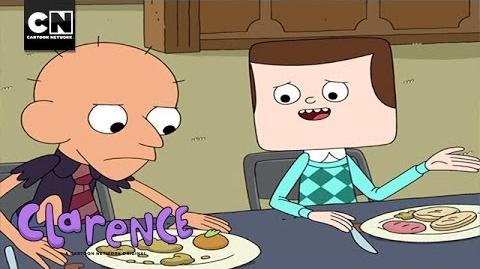 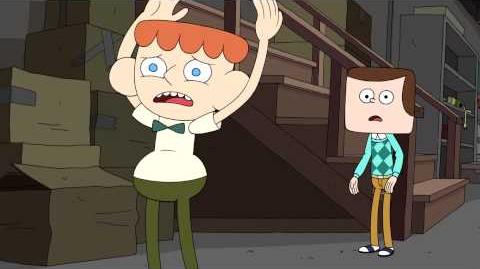 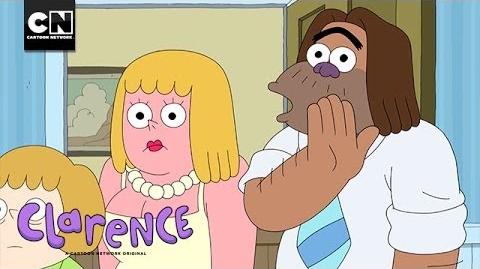 Retrieved from "https://clarence.fandom.com/wiki/Dinner_Party?oldid=90919"
Community content is available under CC-BY-SA unless otherwise noted.