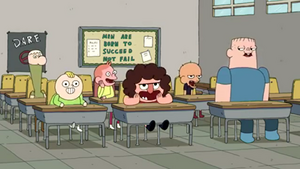 The detention room is a minor location in Clarence. It first appeared in Dream Boat.

It is an bland, grey room where most of the bad students ends up being detained there, majority of the time, Belson usually seen there, more than all of the students in the school, except for Clarence,who been there since his first in Suspended. Mostly Mr. Reese is usually there as a detention staff.

Retrieved from "https://clarence.fandom.com/wiki/Detention_Room?oldid=83509"
Community content is available under CC-BY-SA unless otherwise noted.