Detention is the thirty-ninth episode in Season 1 of Clarence.[1]

When detention becomes the place to be during recess, Jeff transforms it into a 'too-cool-for-school' club.[2]

The episode begins at school, where Ms. Baker is giving geography class. While Ms. Baker has trouble keeping the map from rolling back up, Clarence plays with a birthday card that plays music when it's opened up. Clarence shows the card to Jeff and Sumo, but Jeff thinks the fact that he's the new hall monitor is cooler, then he shows off his shiny hall monitor sash, which he sewn onto his shirt. Clarence continues playing with the birthday card, but Ms. Baker tells him to play with it after class, so Clarence puts the card in his desk. As Ms. Baker tries to continue teaching the class, Clarence has a hard time taking his mind off the musical birthday card, so he shows it to Gilben, which angers Ms. Baker, and she tells him that he's going to get detention if he plays with the card during class again. Clarence apologizes, but he plays with the card again anyway. Ms. Baker yells at Clarence, then the scene changes to Clarence entering the detention room. Mr. Reese tells Clarence to get in his seat, then Belson enters the room and gives Mr. Reese a doughnut. Mr. Reese thanks him for the doughnut, but tells him it won't get him out of detention, then he eats the doughnut. Clarence is surprised to see Percy in the detention room, and Percy explains that he's there because Ms. Shoop said he cried too much after falling off the slide. Clarence is also surprised to see Belson playing his videogame at full volume, and Belson explains that when Mr. Reese eats doughnuts, he crashes from a sugar overload and stays asleep during the whole detention. This gives Clarence an idea.

Clarence sneaks to the desk where Mr. Reese is sleeping, and opens one of the drawers, which has dozens of fun toys inside. Clarence gets excited, and he and Percy has fun playing with the toys during detention. When the clock strikes 12:30, Belson tells Clarence and Percy to put everything back because Mr. Reese is about to wake up. Clarence and Percy does so, and runs to their seats, then Mr. Reese wakes up and tells the three to get back to class. In the hallway, Jeff attempts to look cool in front of Malessica and Kimby, but the girls aren't impressed and walks away, then Clarence and Percy passes by and talks about how much fun they had in detention. Clarence wishes they could do it everyday, but Percy tells him he doesn't have detention tomorrow, so Clarence starts coming up with a way to get detention. The next day, Ms. Baker asks Clarence what he brought for show-and-tell, Clarence doesn't say anything and starts doing a very long fart instead, and Sumo cheers him on. Moments later, as Clarence and Sumo walks through the hall, Clarence tells Sumo about how fun detention is going to be. To Clarence's surprise, Percy has brought along Malessica, Dustin, and Gilben to play in the detention room too. Clarence is bothered at first, but he allows them to join as long as they follow his rules.

When Clarence enters the detention room, Mr. Reese is shown eating another doughnut, and warns Clarence that they're going to have a man-to-man talk about respect. Mr. Reese starts telling a story, but the scene changes to 2 minutes later where Mr. Reese is already asleep. Sumo snaps his fingers to make sure Mr. Reese is really asleep, then he starts yelling about how Mr. Reese will never know about something bad he did, but Belson tells Sumo to stop so his fun detention doesn't get ruined. Percy discovers a cabinet that has something in it, but it's locked, then Clarence finds the key for it. When the kids open the cabinet, they discover that there's tons of toys inside, and they start playing with the stuff. In the hall, Jeff hears a bunch of noise coming from the detention room, so he enters the room to see what's going on. Jeff sees everyone playing with toys, and wonders where Mr. Reese is, when he sees Mr. Reese asleep on the desk, he thinks Clarence and the others killed him. Clarence tries to explain it isn't what it looks like, but Jeff says it's his duty as hall monitor to tell an adult about this, then Sumo tells him they're not even in the hall, and asks him to just be cool for once. The other kids agree with Sumo, and Malessica walks up to Jeff, giving him a sad look, which completely changes Jeff's mind about telling an adult. Jeff tells everyone to party, and the others cheer. Moments later, the kids start having a wild time in the detention room until Belson tells everyone that detention/recess is almost over, so the kids put all the toys back. As Clarence closes the cabinet doors, he tells the toys that he'll see them again tomorrow.

In the hall, Clarence and Sumo thanks Jeff for not telling on them, then Kimby and Malessica passes by to say "Hi" to Jeff, which makes him blush. Jeff wonders if they're going to have recess in detention again tomorrow because he has some improvements in mind. The next day, Clarence walks through the hall and hears loud music coming from the detention room, when he enters, he sees the whole class having a party under dim lights and a disco ball. Jeff greets Clarence, and Clarence worries that the loud party is going to get them caught, but Jeff tells him not to worry because he switched the coffee to decaf and doubled Mr. Reese's doughnut count, which will make him sleep longer. Kimby, Courtlin, and Malessica shows up and tells Jeff that he's really cool, and Jeff allows them to hang out in a special part of the room, then Jeff tells Clarence that he needs him for something, which is taking requests from the other kids about which toys they want to play with, but Clarence gives out the toys very slowly, and the other kids get impatient. Nathan decides to get the toys himself because detention/recess is nearly over. Clarence tries to stop him, but then all the other kids start grabbing toys. Jeff continues flirting with the girls, and then he announces a special surprise, which gets the kids even more excited. Clarence looks out the window and realizes that it's a beautiful day, so he asks the others if they want to play outside, but Amy Shtuzger says the outdoors are lame, then the kids start chanting "Surprise!", because they rather see Jeff's special surprise. Clarence climbs out the window and decides to play outside all by himself.

In the detention room, the kids continue chanting, so Jeff decides to bring out the surprise, which is just statue of himself made of blocks. The kids aren't impressed, and Nathan tries to break it, only to find out Jeff super-glued the blocks together, and that's when the kids think Jeff is really uncool. Jeff lies to everyone saying that the statue wasn't the real surprise, so he pulls out Clarence's musical birthday card, then Courtlin gets bored with seeing the same toys over and over, so the girls leave the room. Jeff tries to get the girls to come back, then Sumo quits and says the party's over. At that moment, Dustin looks out the window and sees Clarence having fun on the playground, and the kids begin to realize they haven't played outside for a long time, so they all go outside to play, leaving Jeff behind in the detention room. Jeff continues trying to convince the kids that the musical birthday card is cool by opening it over and over, which causes the card to catch on fire and activate the sprinklers in the ceiling, waking up Mr. Reese. When Mr. Reese sees the mess, he tells Jeff that he's one of the most irreponsible hall monitors he's ever seen, so he rips Jeff's hall monitor sash off his shirt, then he catches Belson playing a videogame, and Belson quickly hides his headphones and game system behind his back, ending the episode. 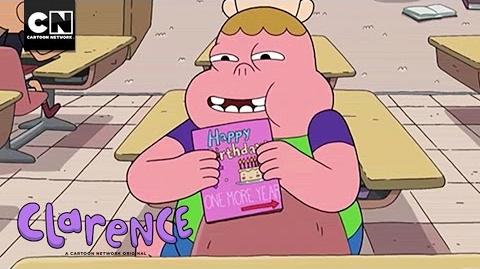 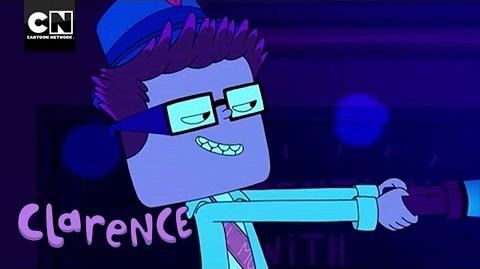 Retrieved from "https://clarence.fandom.com/wiki/Detention?oldid=86479"
Community content is available under CC-BY-SA unless otherwise noted.