Clarence The Movie is the 35th episode of Season 3, and the 125th episode overall of Clarence.

When Clarence starts to play around with his home video camera, he becomes increasingly drawn into the world of filmmaking.

The episode begins with an adult placing a tape named "Clarence the Movie" on the VCR. The film begins with Clarence taking a bath with his clothes on, while Mary watches him, Chad enters the movie and Clarence shows him what they are doing. In the next scene of the film, Clarence is seen playing with his toys, Chad enters and quickly leaves.

Clarence throws the toys and a blue screen appears that says "Without Cartridge". The next scene is one of Sue and EJ in their marriage, but it quickly cuts and goes to the next shot, in which Jeff and Sumo watch the TV on a Clarence film in his room, but the shot is cut. In the next scene Clarence and Sumo play with Clarence's toys in his room, suddenly Jeff looks out the window with "Mr. Sausage" and the film is cut again.

Next, Sumo and Jeff dramatize a fight for a princess, but Jeff only uses a toy turtle, the fight ends with a picture of a volcano. After that, Clarence is seen with a cardboard saw pretending to cut an arm, Sumo throws tomato sauce to make it more realistic. Suddenly Chad enters and screams because he thinks Clarence really cut his arm, but he reassures him by reminding him that it's just sauce.

Then Mary is seen talking to Clarence and Jeff, and later, Clarence is seen in Mary's car, going somewhere. In the next part, the children are in the park filming whatever they see. First, he focuses on Mr. Reese sitting on a bench, then on Camden's cheeks, who later goes with his grandfather and father. Then Chelsea arrives and joins their film. Clarence makes her wear the jacket that Jeff did earlier in "Clarence for President". Clarence ties Jeff and puts him under a children's game, while having Chelsea and Sumo hold hands.

Clarence then finishes the movie and it shows him playing sad music and a short slow-motion version of a clip of Sumo laughing with on his knees on the floor plays, after that, an there is an edit you see with Chelsea saying "I love Sumo" and the movie ends with some fireworks and now is shown on Clarence's TV, despite being in "Clarence the movie." Chelsea and Sumo get upset about it and chase Clarence in the park, causing him to fall down a slight hill. The scene ends with Chelsea, Clarence and Sumo laughing, and Clarence is hurt. In the end, Chad plays the guitar with the window of his house covered, but he stumbles and falls.

The film ends and the staff of "Nannerz Films" thinks they should do lunch. 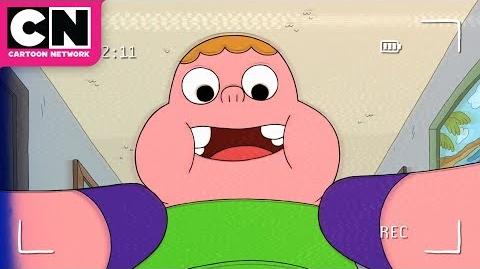 Retrieved from "https://clarence.fandom.com/wiki/Clarence_The_Movie?oldid=90805"
Community content is available under CC-BY-SA unless otherwise noted.