Clarence Gets a Girlfriend

"Clarence Gets a Girlfriend" is the sixth episode in Season 1 of Clarence.

Clarence tries to become a perfect gentleman before a date.[1]

Clarence makes a toy person out of clay and puts it on a toy motorcycle. He runs around the room playing with it, then he stops next to Ashley's binder and asks if he can make the toy do a backflip over it.

Ashley says "sure." When Clarence walks away, Ashley's friends tell her that she and Clarence are getting closer together, and they want her to ask Clarence out on a date. Ashley is unsure about it at first, but she soon walks over to Clarence and asks if he wants to be her boyfriend. Clarence mutters for a while and then replies that he will, and the two decide to have their date at the Pizza Shack.

When Clarence sits next to Jeff and Sumo in the cafeteria, he tells them that he has a girlfriend. Jeff gets so surprised that he spits out his juice and runs into another room. In there, Jeff talks to himself about how he's the best one of the trio so he should've got a girlfriend first before Clarence. In the hall, Clarence and Sumo talks about his date with Ashley, and he asks Sumo what to do. Sumo says that the first thing to do is change Clarence's wardrobe, so Sumo takes Clarence to the Lucky Litter Thrift Store to try on some clothes. Jeff spies on Clarence through the window as he's trying on clothes. After many silly outfits, Clarence soon comes out the dressing room with an outfit that Jeff thinks looks really good. However, Sumo doesn't like it, so he gives Clarence a big purple jacket to wear instead. Outside, Sumo teaches Clarence how to be a perfect gentleman. Sumo pretends to be a fancy lady and it's Clarence's job to figure out what to do when there's a big puddle in the way.

Clarence keeps giving the wrong answer, so Sumo tells him what to do; he's supposed to throw his jacket on the puddle for him to walk on it. Lastly, Sumo takes Clarence to Jeff's house so Jeff can make Clarence interesting. Jeff looks up how to do that on his computer, but after the computer loads too slowly, Jeff decides to write down some things for Clarence to say during the date on paper.

Outside the restaurant, Clarence feels confident, thinking the date will go perfectly as long as he has Sumo right by his side to help, but then, Sumo says he won't be there because it's a date. This makes Clarence very nervous. When Clarence enters the restaurant, he shakes and stutters while he tries to tell the lady who works there that he's looking for Ashley. The lady points him to where Ashley is, and Clarence and Ashley soon take their seats at the table. Clarence reads the menu and orders a pizza with crust inside the crust, and Ashley orders a chocolate milkshake. Clarence reads from the paper Jeff wrote for him and asks her random questions. Ashley soon figures out that he's reading off a paper. When Ashley's milkshake arrives, Clarence sees a picture on the wall of a boy and a girl using two straws to drink out of the same milkshake. This gives Clarence the idea to put an extra straw in Ashley's milkshake, but he accidentally splattered the milkshake all over her.

Clarence tries to make up for that by putting his jacket over Ashley, similarly to what he did with Sumo and the puddle. A few tables away, Jeff and Sumo spies on Clarence and Ashley, and Sumo says that he's proud of Clarence for doing what he taught him. Ashley soon decides that being Clarence's girlfriend is weird and says they should just go back to being normal friends. Clarence agrees, then he tells her about a creek behind the school that's full of frogs, so he, Ashley, Sumo and Jeff all go there to have fun catching frogs. Sumo apologizes that Clarence's date didn't work out, and Jeff asks Clarence if Ashley is available for him to date, and Clarence says they don't need girlfriends yet, and they should be like a frog in the creek who is floating on its back without a care in the world. Sumo tells him the frog is dead, and Clarence says that he'll give Sumo a dollar if he eats it, and Sumo said "deal", ending the episode. 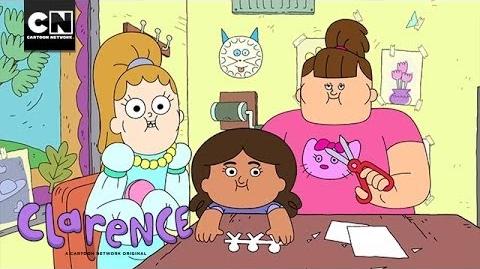 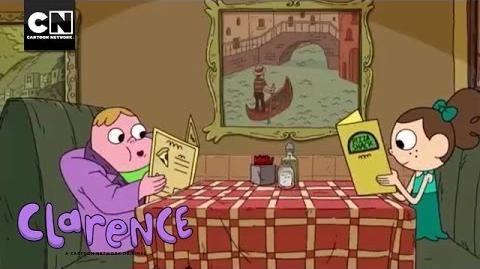 Retrieved from "https://clarence.fandom.com/wiki/Clarence_Gets_a_Girlfriend?oldid=91113"
Community content is available under CC-BY-SA unless otherwise noted.