Chalmers Santiago is the 42nd episode in Season 1 of Clarence.[1]

While Clarence spends a lazy Sunday playing an 8-bit adventure game called DRAGON’S CUSP, Mary asks him to return some mail to the guy across the street, “Chalmers Santiago,” whom they’ve never seen. Clarence makes it his mission to befriend the mysterious neighbor, only to find out it’s someone he knows quite well.[2]

The episode begins with Clarence watching TV upside-down, he gets really bored and falls off the couch, then Mary enters the room and tells him to do some chores, but Clarence rolls under the table because he doesn't to do them, and Mary questions if he's just going to spend the whole day doing nothing. Clarence looks at the TV screen from under the table and agrees to do the chores. Mary pulls out a box from the closet, and it's full of things she wants Clarence to take to the thrift store. Mary walks off, and Clarence begins looking through the box. He finds a couple of boring and creepy things, then he finds an old videogame console called "PLAYTHANG", which catches his attention, so he plugs the console into the TV, but when he turns it on, the TV shows a bunch of colours on the screen and makes a terrible loud noise. Clarence runs around the table, covering his ears, then he attempts to insert a game, and it works, loading up a game called "Dragon's cusp". Clarence presses "Start", and tries to figure out the controls of the game, but quickly gives up when his game character gets trapped in a box. Moments after Clarence walks away, Chad is shown playing the game and trying to get the character out of the box.

Clarence goes into the kitchen to tell Mary he's bored. Mary decides to let him do more chores, and shows him some mail on the counter. Mary tells him to deliver the mail to their neighbor. Clarence reads the back of the envelopes and sees that their neighbor's name is "Chalmers Santiago". Clarence gets curious and tries to open one of the letters, but Mary tells him not to because it's not polite to read other's mail. Outside, Clarence holds one of the letters to the sunlight and sees that one of them is a water bill, then he starts walking across the street to the house. Clarence rings the doorbell, but no one answers, however, a window curtain moved, so Clarence started calling Chalmers' name while knocking on the window, and again, no one answered, so Clarence placed the mail under the door and began walking away. At that moment, something grabs the letters from under the door, which spooks Clarence, then he runs back home. In the living room, Clarence spies on Chalmers Santiago's house with a pair of binoculars, then Mary shows up and wonders why the items Clarence was supposed to take to the thrift store are on the floor. Clarence pays no attention to what Mary said, and talks about how Chalmers ordered a pizza. Mary gets mad with Clarence for spying, then she quickly gets interested and starts spying too because she's never seen Chalmers before. Joshua is shown delivering the pizza to Chalmer's house, and Mary complains that he's blocking their view and all they're able to see is a pair of hands, but it does reveal that the person is pretty short. Soon, the door closes and Mary and Clarence get disappointed. A little while later, Clarence attempts to be a pizza delivery man, and deliver a pizza to Chalmers. Clarence starts using the pizza to knock on the door, then he listens to sounds through the door, and assumes Chalmers has already got plenty of pizza. Clarence goes back to home and tells Mary that the pizza idea didn't work. As Chad plays the videogame, he guesses that Chalmers just wants to be alone, and that's when Clarence decides that Chalmers needs a friend.

Clarence knocks on Chalmers door, and while nobody answers, the fence opens up and Clarence decides to go in Chalmer's backyard. In it, old, discarded items are everywhere and the pool is filled with dirt. Clarence enters the house through the back door and mentions how it looks just like his house, but backwards. When Clarence looks inside what would be his "backwards bedroom", he gets spooked by the lava lamp's red light and a creepy musicbox. Clarence decides not to enter the room and sees a blue light at the end of the hall, so he walks over there. Clarence sees a giant TV set and hears someone eating, so he hides, but quickly decides to enter the room anyway. As Clarence walks closer, the chair across from the TV falls backwards, revealing that it's Belson. When Belson finishes whining about losing his game, he opens his eyes and sees Clarence. Both of them yell, then Clarence gets excited and guesses that Belson lives with Chalmers, and he asks if Chalmers is Belson's dad. Belson explains that Chalmers was just some guy his dad worked with. Clarence wonders if Belson moved because he thought Belson lived in that "spooky Dracula castle", then Belson explains that his dad bought this house thinking it would be a good investment, but nobody liked it, so he just uses it as his "crib" now. Clarence is amazed that Belson gets to have the whole house to himself and do whatever he wants, and Belson says it's pretty cool as long as you stay out the darkness. Clarence wonders where the darkness is, and at that moment, he accidentally drops a pizza slice on the floor and something in the darkness takes it away. Clarence gets spooked and mentions the "Dragon's cusp" game he was playing earlier, and wonders if Belson wants to come over and play it with him. Belson agrees to do it, but as soon as he walks Clarence out the house, Belson shuts the door on him, and stays in the house. Clarence tells Belson that he'll just wait for him outside.

Hours and hours go by and Clarence is still standing in the same spot, then he realizes that there's a cord extending from Belson's crib to Clarence's house. Clarence walks across the street and unplugs the cord, which turns off Belson's game, making him angry. In Clarence's living room, Chad continues playing "Dragon's cusp", and Clarence watches. Suddenly, the game turns off and Chad goes outside to see who uplugged the game. Turns out it was just Belson, and Clarence assumes he came to play "Dragon's cusp" with them. Belson hides the plug behind his back and pretends that he did come to play with them. In the living room, Belson plays "Dragon's cusp" with Chad and Clarence, nearly making it to the end of the game, until Belson's ride shows up, and Belson starts leaving the house. Clarence wants Belson to stay and get the dragon's cusp, and Belson says that the dragon's cusp is just another square, then he asks Chad if he can plug his cord back in so his food doesn't spoil in the fridge, and Chad, distracted by the game, allows him to do it. Belson leaves the house, and Chad is really excited about being so close to beating "Dragon's cusp". Suddenly, Belson plugs up a cord, and causes the TV to make that terrible noise again, and Clarence, Mary and Chad runs around the table, covering their ears. Belson gets in the car and tells his driver to start driving, then Mary's voice is heard from the house as she tells Chad and Clarence that all they had to do was unplug the TV, ending the episode. 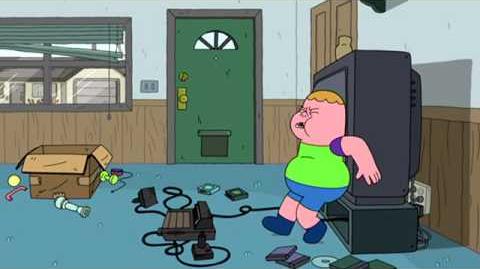 Retrieved from "https://clarence.fandom.com/wiki/Chalmers_Santiago?oldid=93597"
Community content is available under CC-BY-SA unless otherwise noted.