Chadsgiving is the 27th episode of Season 3, the 117th episode overall of Clarence. It is the first Thanksgiving themed episode.

Clarence is excited for Thanksgiving dinner with Chad's parents, but Chad worries that their bizarre hippie customs will make him look irresponsible.[2]

Episode begins with Chad, Mary, and Clarence getting ready to go to Chad's parents' place for Thanksgiving. Chad is nervous. When Chad and Mary get in the car, they are surprised to see Clarence sitting with Camden and Vu in the backseat. Clarence says he invited them. The thought of having extra guests makes Chad even more nervous, then he realizes he left the house keys in the door, so he goes to get them.

As Chad drives everyone to his parents' place, Clarence tells Camden and Vu about Chad's parents. Mary asks Camden and Vu why they aren't having Thanksgiving at their home. Vu explained that his brother got lice, and his mom cancelled dinner. Camden explains that his parents are in the hospital, then he starts explaining every other reason. Soon, Mary gets tired of him talking, so she turns up the radio. Later, Clarence, Camden and Vu are shown sleeping, and Chad gets nervous about a garbage truck following them, so he drives down a different road to try and lose them, which wakes up the kids.

Clarence tells everyone it's just Lucine the garbage lady, another person he invited. Lucine's garbage truck continues following Chad's car all the way to his parents' house. Everyone walks out the car, and Chad's is still nervous. The kids are amazed by everything around Chad's parents' place, and Mary tells Chad that the kids love it, so there's nothing to worry about. Chad sees keys in the front door, reminding him about how he left his keys in the door earlier, but he says his parents are irresponsible and pretends he would never to that.

When everyone enters the house, Chad's parents are recording themselves dancing in colorful masks. Chad clears his throat to get their attention. When Chad's parents goes up to meet everyone, Mary apologizes for ruining their video, but Chad's dad tells her they're just making a video to bury in the yard. Chad's parents weren't expecting any quests because they forgot it was Thanksgiving, which bothers Chad. As Chad complains to his parents about forgetting Thanksgiving, Mary tells Clarence to show the guests a thing in the living room while she helps Chad.

Clarence thinks it's just a big painted stick, but Lucine says it's a didgeridoo. Clarence had never heard that word before, and starts laughing. Camden says he has played one of those before, but when he blows into it, not much sound comes out. As Camden plays the didgeridoo, Clarence and Vu talks to Lucine. Clarence wants Camden to her his funny story that he's allergic to bee stings. In the other room, Chad wants his parents to stop massaging each other and listen to him, then Mary asks them what they have to cook with, but everything they have is stuff they can't make dinner with. When Clarence and the others enter the room, Clarence asks to see the emus, but Chad wants to start dinner, so he goes out by himself to look for food.

In the yard, Chad's dad lays on the ground, kicking his feet in the air. Clarence wonders what he's doing, and Chad's mom tells him it's how he calls the emus, then Clarence tries it and more emus show up. Meanwhile, Chad searches for a store to buy dinner. Later, Clarence, Vu, and Lucine draws pictures for their family members. Clarence made a picture of Chad smiling with the message, "BE CHILL CHED". When Chad comes back, he says he could only get gas station food. Not knowing where everyone's at, Chad assumes he has to make dinner himself, then he realizes everyone's in a bus having a party.

Chad goes inside the bus, and Chad's mom is happy to see him arrive, but Chad says he came just to find out where the pots are. Mary tells Chad he needs to chill. Suddenly, Chad notices a beehive in the corner, but no one else is worried about it. Clarence and Vu continues druming, and the bees start flying everywhere. Chad hits one of the bees and it stings Camden's cheek. Chad tries to get everyone to realize how serious it is because Camden's allergic to bees. Camden's cheek starts to swell. Chad's mom tries rubbing garlic on Camden's cheek, but that made it worse. Soon, both of Camden's cheeks were swelling.

Chad asks Camden for his allergy pen. Chad doesn't know what to do, then Camden pulls down his pants and shows Chad to use the pen on his leg. After a countdown, Chad puts the allergy pen in Camden's leg, and the swelling goes down. Everyone is amazed that Chad did it, but Chad can't believe everyone thought that was fun and that nobody cares about dinner. As Chad leaves, Clarence puts his picture from earlier in Chad's back pocket, and tells him that they don't need a fancy dinner, and that the only rule to Thanksgiving is being together. Chad's parents thinks it may be their fault for Chad being angry, so they decide they have to make things right.

Meanwhile, Chad sits on a rock outside. When he realizes there's a picture in his pocket, which is the picture from Clarence, he hears everyone's voices in his head telling him to chill. This makes Chad decide to act chill, so he rips his shirt, and says he's chill. When he enters the house, he sees everyone making Thanksgiving dinner. Later, Chad's parents records everyone having a fun time on Thanksgiving, and the episode ends with a VHS tape with "Thanksgiving 1998" written on it being buried in the yard.

The gallery for Chadsgiving can be found here.

The transcript for Chadsgiving can be found here. 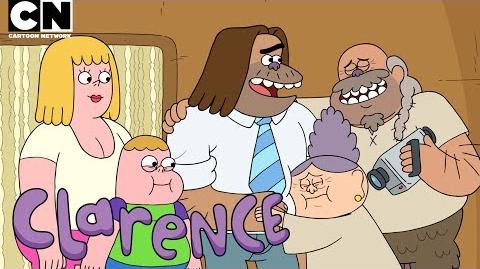 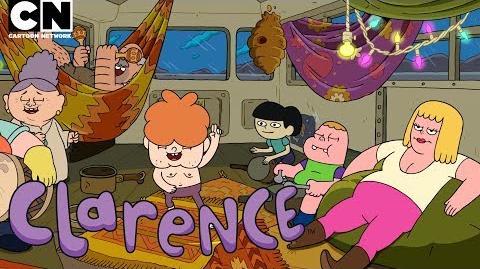 Clarence Chadsgiving Cartoon Network
Add a photo to this gallery

Retrieved from "https://clarence.fandom.com/wiki/Chadsgiving?oldid=91965"
Community content is available under CC-BY-SA unless otherwise noted.