Chad, is a minor character in Clarence. He is Mary's boyfriend, and one of Clarence's friends and step-dad.

Chad is Mary's live-in boyfriend and a father-figure to Clarence, who looks up to him. He has a bachelor's degree and works as a sign spinner at Hip Clips, which is also where Mary works. Mary's mother seems unimpressed with Chad and mentions that Mary's former husband (or boyfriend), had a "nice car" and other nice things, unlike Chad. Mary's father; however; did not even notice that Chad wasn't the same person as Damian (Hurricane Dillis).

Chad has a very ape-like appearance, with shoulder-length brown hair and permanent stubble. Chad is very tan with big, hairy arms and legs. He usually wears a white t-shirt, torn blue shorts and socks. In "Dinner Party", he wears sandals. 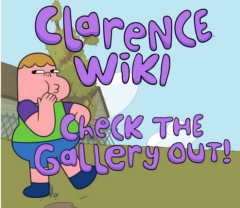 The gallery for Chad can be found here.