Buckey O'Neill is a minor character at Rough Riders Chicken in Clarence. He made his first appearance in "Fun Dungeon Face Off." He was Fictionally Portrayed as a Unknown Guy in a Buckey O'Neill Costume 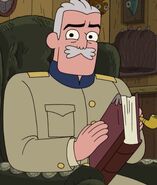 Add a photo to this gallery

Retrieved from "https://clarence.fandom.com/wiki/Buckey_O%27Neill?oldid=90150"
Community content is available under CC-BY-SA unless otherwise noted.