Avast mateys! Clarence and Sumo are psyched to play their pirate-themed board game, Thirty Days and Seven Seas, until they learn Jeff has invited boring old Breehn along. After Breehn gets frustrated and leaves, it’s up to the three scallywags to rescue Breehn from an intense flood.

The episode begins on a rainy day where Clarence and Sumo sings a pirate song while making their way to Jeff's house. Inside the house, Jeff's parents and their friends are getting ready to play a guessing game. When Clarence and Sumo enters the house, EJ calls Jeff, but Jeff takes awhile to show up, so the boys talk to the adults, and Clarence accidentally ruins their game.

When Jeff finally arrives, he asks Clarence and Sumo if they're ready to play the pirate game, then the boys go upstairs. The box of the pirate game, (Thirty Days and Seven Seas), is shown on the screen, then Jeff takes everything out of the box, announcing that they're finally going to get pass the Kracken. Sumo complains that the Kracken always eats them, then Breehn says he hopes they can beat him too. Clarence and Sumo gets scared because they didn't know Breehn was there, and Breehn explains that Jeff invited him to their game night, Clarence and Sumo are slightly bothered by this. Breehn shows them that he brought a game too; "Limbo Rooster". Sumo tells Breehn that their pirate game usually has only 3 players, and that having a fourth one would be weird, but when Breehn shows them a bag of "Cheezerinos" he brought, Sumo gets excited and tells him he can stay. Breehn thanks Sumo, and Clarence asks to sit in the beanbag chair, so Breehn sits on the floor with the others.

The boys begin coming up with their pirate names for the game. Jeff, Sumo, and Clarence comes up with really good names, but Breehn is unable to come up with anything, so he just calls himself, "The Pirate Breehn".

Jeff says it's a great name, then he announces that he has to use the bathroom, and tells Sumo and Clarence to come along with him. In the bathroom, Jeff complains to the others that "The Pirate Breehn" is a terrible name, and he apologizes for inviting Breehn. Clarence asks if he can play as the mermaid, and while the mermaid isn't a playable character, Jeff allows Clarence to play as the mermaid as well as the character he's already playing. When the three goes back into Jeff's room, Clarence wonders where Breehn went, but it turns out that Breehn was sitting in the same spot he was before. Since everyone was there, they finally begin playing the game. Clarence, Jeff, and Sumo plays the game like professionals, but Breehn has a hard time figuring it out. When Breehn finally decides to play a card, he misses and gets thrown overboard. Jeff gives Breehn some advice, then Clarence plays a card to rescue Breehn. Next, Sumo draws a card where everyone has to raise their hand, Breehn does it too late, causing him to lose two turns. In the bathroom, Jeff apologizes again for inviting Breehn because he's really bad at the game. Soon, the three goes back into Jeff's room to play the game, and Breehn still has trouble understanding it. Sumo draws a "Storm Card", and it suddenly begins thundering and lightning outside. Chad is shown attempting to cut a tree with a chainsaw, but due to the bad weather, he throws the chainsaw on the ground and goes back into the house, however, he forgot to turn it off.

The boys continue playing the pirate game. Sumo and Jeff's characters get thrown overboard and gets surrounded by sharks. Jeff and Sumo panics, and Clarence panics as well because they don't have their captain (Jeff) anymore, then Breehn bravely steps in and tells them what to do to escape the sharks. After the sharks are gone, an emeny ship appears and Clarence asks Breehn what they should do about it. Breehn helps them again, and Clarence and Sumo cheers for Breehn, but Jeff, however, starts getting mad. Next, their ship makes it to the dreaded Kracken, which is the only thing that stands between them and getting the treasure, Jeff tries to give his suggestion on what they should do, but Sumo interrupts because they got The Pirate Breehn to help. Sumo tells Breehn to fire the cannon, but they miss, so the Kracken knocks everybody out the ship. Jeff gets upset and yells at the others for not listening to him, Breehn apologizes, and Jeff wants to do a do-over, Sumo stops him, and Jeff says that he's the captain, so everyone has to listen to him, Sumo says Breehn is a much better captain, but Jeff says Breehn wasn't even supposed to be there, then Jeff and Sumo begins fighting each other, and Clarence tries to stop them.

While the three are fighting, Breehn decides to leave the house. The wind and rain is really heavy outside, and a garden gnome falls down and blocks a street drain.

In Jeff's room, Sumo and Jeff continue fighting, then Clarence realizes Breehn is gone. Clarence looks out the window and sees Breehn getting washed away by the flood. Sumo says it's all Jeff's fault, but before the two start fighting again, Clarence gives a speech and says they had the best game of three pirates in a pizza party ever, and it's because The Pirate Breehn was there, Jeff and Sumo agrees, and they decide to save him. Outside, the boys jump into their raft, and begins calling Breehn's name. Jeff spots Breehn sitting on top of a car through his telescope, then a big pile of trash gets in their way. Sumo and Clarence pretends it's the Kracken, and Sumo thinks they should fire a cannon, but since it's just a pile a trash, Jeff says they can go around it, as they're doing so, a rake in the pile pokes holes in their raft, causing them to nearly sink. The three calls Breehn for help, and Breehn tells them to grab his hand. Suddenly, the chainsaw from earlier starts moving toward them, and the boys get scared. Inside the house, the adults are having fun playing their guessing game, being completely unaware of what's going on outside.

Clarence, Jeff and Sumo make it to the top of the car with Breehn, and the chainsaw is surrounding them. Clarence panics, and Breehn sees a bench in the distance, but it's too far to jump to. Breehn tells Sumo to hand him a hose, then he throws it on a tree branch and uses it to get to the bench. Breehn moves some things out the way with his sword, which allows the bench to float closer to the others across the water. Breehn tells them to jump onto the bench, and Jeff and Sumo does so, but Clarence takes off his clothes, (except his underwear), as an attempt to make himself lighter. Clarence stretches his legs to reach the bench, and just when he's between the car and the bench, the chainsaw begins coming his way, so Clarence squeezes his buttcheeks together so that the chainsaw doesn't touch him, then he jumps onto the bench and starts moving the bench faster to get away. Breehn chops the pile of trash with his sword, causing a mattress to fall and it stops the chainsaw. The boys celebrate, and Jeff apologizes to Breehn for being a jerk, then the boys continue sailing home.

In Jeff's house, the adults are still playing their guessing game, and the Mayor notices the boys walking in and asks if they were outside. Up in Jeff's room, Clarence, Jeff, Sumo and Breehn plays another game of Thirty Days and Seven Seas, and they win the game. Jeff allows Breehn to open the treasure chest, and inside is a couple of coins that are glued to the bottom, which confuses them, then Clarence suggests they play "Limbo Rooster". Downstairs in the living room, the kids and the adults have a good time playing Limbo Rooster, and the episode ends with Gilben getting washed away in the flood outside. 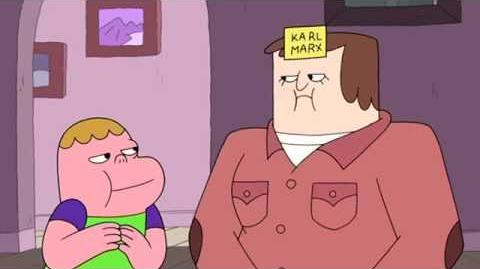 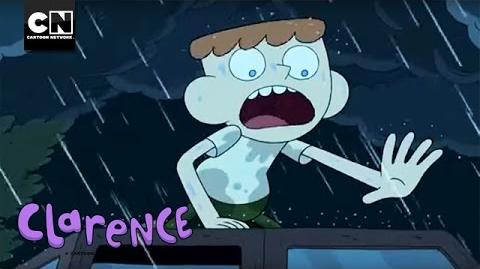 Breehn to the Rescue I Clarence I Cartoon Network