After a marathon of classic sitcom episodes, Clarence becomes stuck as alter-ego "Clarry," an obnoxiously overacting sitcom version of himself. It's up to his friends and family to help him snap out of it, or face life with a new Clarence.

The episode begins at Sumo's house, with the children talking about what they will do over the weekend. Sumo says that he will spend the whole weekend eating lollipops, then building a shelter with sticks in the garage and being able to live in it. Jeff will go pick blueberries with their mothers. Clarence laughs and takes out of his backpack a bag with a toy dinosaur that grows with water. Chad goes to pick up Clarence but does not dare to enter the house of Sumo for the dogs. Clarence greets his friends and promises to see them on Tuesday with his dinosaur already grown.

At Clarence's house, Chad sits on the sofa to watch a 3-day marathon of a classic series called "The Blurbs." While listening to the commercial, Clarence puts his dinosaur in a glass and fills it with water, then pours the water and the dinosaur into a larger glass. Upon hearing Chad's laughter, Clarence goes to the living room and Chad explains that he is watching a series from his childhood. An episode begins and the intro of the series is seen, with classical music. Clarence sits in front of the TV and watches the series, a little nervous.

In that episode, an explosion is heard and the older sister of the family comes down with burned hair, revealing that Clarry ruined her experiments and now she will not be able to go to the dance at night. Chad laughs and Clarence watches without understanding what it is about. After a few minutes, the episode progresses and Clarry solved the problem of her sister, inventing a new hairstyle. Clarence believes that the series is good and decides to go look at his dinosaur, but he hears a commercial announcing that they will give more episodes of "The Blurbs" and Clarence remains seated to watch the series. The more he continues to watch the series, Clarence begins to incorporate the family's customs in the series. Clarence refuses to go to a sleepover at Breehn's house to continue watching television.

It gets dark and Clarence spends hours in front of the television. Chad goes to sleep and Clarence does not flinch. Later, his eyes begin to tremble as he reflects the character "Boo Boo" or "Clarry" saying one of his phrases. Chad wakes up because he hears noises coming from the living room. Chad takes a milk and approaches Clarence, who seems hypnotized by the series. Clarence scares Chad by turning his head sharply, and Chad throws the milk to the ground. The next day, at Sumo's house, Jeff and Sumo build the shelter that Sumo planned to make. Sumo leans under the shelter and Jeff throws blueberries for him to eat. Clarence arrives with a new look and personality similar to that of "Clarry". Jeff realizes that Clarence was watching the series "The Blurbs" and assures that the series is very bad. Sumo gives Clarence a palette, and he discovers the Sumo shelter and throws himself on it, causing it to break, and Sumo and Jeff get angry.

At school, Clarence continues to imitate Clarry while Ms. Baker does a class about shooting stars. At first, his classmates laugh, even Belson. But when Clarence stands in front of the class and he says Gilben is a dummy, pretending he is behind of him, his classmates begin to think that it no longer makes sense, because Gilben does not go to Aberdale Elementary. Clarence returns to his seat and pulls out a honeycomb. At home, Clarence buys tickets to Hawaii and dresses to go to the beach. Mary gets angry and tries to call the airline to cancel the purchase, just as Chad warns Mary that Clarence is reading the newspaper sitting on toilet, but on the roof. Clarence throws the toilet down the roof and it breaks. Later, Chad tries to repair the toilet, while Mary talks to Jeff and Sumo in the bathtub, seeking help to stop Clarence. Jeff asks Clarence what he will do that day, and Clarence goes saying he'll do what he wants, giving Jeff an idea.

Chad shows Jeff and Sumo the entire series so they can learn the appearances and personalities of the characters, and play along with Clarence. Clarence goes out into the garden and discovers that it is set as the series "The Blurbs", so they can play their own version of the series. Acting as one of the characters in the series, Jeff convinces Clarence to end the series and stop acting as Clarry. After a few tries, Clarence eats a cranberry and immediately his personality is again the same as before. Clarence wonders how he got to dress so weird. Jeff asks if he remembers Clarry, causing Clarence to be like him again, but he quickly stops because Chad mentions that the series ended. At night, Chad has been watching the series for so long. Clarence's dinosaur became so big that he broke the glass and passed near Chad, scaring him and ending the episode. 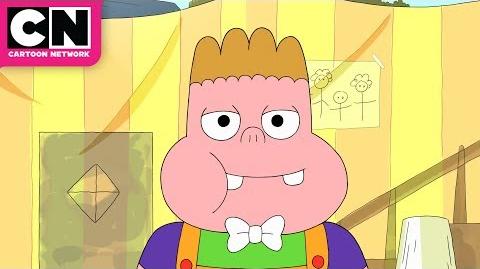 Clarence Brains TV Cartoon
Add a photo to this gallery

Retrieved from "https://clarence.fandom.com/wiki/Brain_TV?oldid=87965"
Community content is available under CC-BY-SA unless otherwise noted.